Kodak. Fred Ritchin. Gerhard Steidl. Soviet Photography. Leica. What Makes a Photograph Influential? Fujifilm. Film Jargon: Over:Under Exposure, Pushing:Pulling Film, X Pro, What? Pics and It Didn’t Happen. The tension between experience for its own sake and experience we pursue just to put on Facebook is reaching its breaking point. 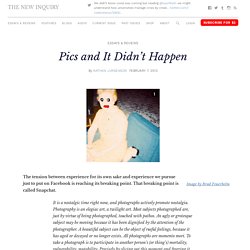 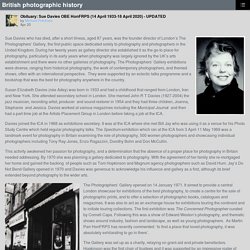 During her twenty years as gallery director she established it as the go-to place for photography, particularly in its early years when photography was largely ignored by the UK’s arts establishment and there were no other galleries of photography. The Photographers’ Gallery exhibitions were diverse, ranging from historical photography, the work of contemporary photographers, and themed shows, often with an international perspective. They were supported by an eclectic talks programme and a bookshop that was the best for photography anywhere in the country. Susan Elizabeth Davies (née Adey) was born in 1933 and had a childhood that ranged from London, Iran and New York. She attended secondary school in London. 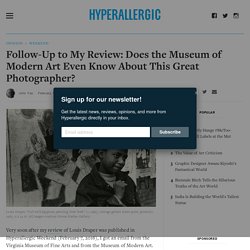 Pryor Green, who sent the email from Virginia, included her office phone and official email, should I wish to speak to her. This is what I learned from the Virginia Museum of Fine Arts: I was intrigued by today’s Hyperallergic article about Louis Draper but I also realized I needed to tell you about news from the Virginia Museum of Fine Arts. This is the entire email I got from Margaret Doyle, director of communications at the Museum of Modern Art: Hi John,I just saw your story about Louis Draper and wanted to let you know that everything in our collection is not necessarily on MoMA.org.

Vernacular Photography. A Picnic at the Border. The Southern border of the U.S. is the site of fraught crossings and tense searches, border-patrol guards and a long promised, not fully realized wall. 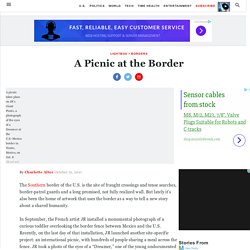 But lately it’s also been the home of artwork that uses the border as a way to tell a new story about a shared humanity. In September, the French artist JR installed a monumental photograph of a curious toddler overlooking the border fence between Mexico and the U.S. Robert Delpire, Champion of Photography as Art, Dies at 91 - The New York Times. Photojournalism. Architecture and Photography. Working with GWW: A Conversation with John Perivolaris. Photography and the Feelings of Others: From Mirroring Emotions to the Theory of Mind. 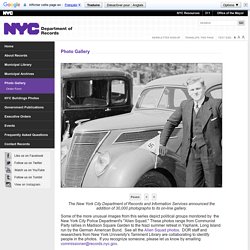 Some of the more unusual images from this series depict political groups monitored by the New York City Police Department's "Alien Squad. " These photos range from Communist Party rallies in Madison Square Garden to the Nazi summer retreat in Yaphank, Long Island run by the German American Bund. See all the Alien Squad photos. DOR staff and researchers from New York University's Tamiment Library are collaborating to identify people in the photos.

Clarence John Laughlin. Photos From Kodak's Picture Contests in the 1920s, '30s and '40s. Hidden Light: The Visual Language of an Autistic Photographer. Hello there! 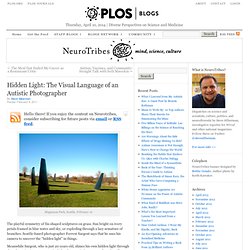 If you enjoy the content on Neurotribes, consider subscribing for future posts via email or RSS feed. Magnuson Park, Seattle, February 10 The playful symmetry of fin-shaped sculptures on grass. Sun bright on ivory petals framed in blue water and sky, or exploding through a lacy armature of branches. Seattle-based photographer Forrest Sargent says that he uses his camera to uncover the “hidden light” in things. Meanwhile Sargent, who is just 20 years old, shines his own hidden light through these haunting images. It turned out to be a lot. Memento mori photography. The artist with the bad camera. With what could accurately be described as the worst camera ever made, Miroslav Tichý (1926 – 2011) would take sneaky, surreptitious shots of women around his hometown of Kyjoy in the Czech Republic, capturing thousands of pictures between the 1960s and 1985 and conducting himself in a way that would most probably arouse police suspicion today. 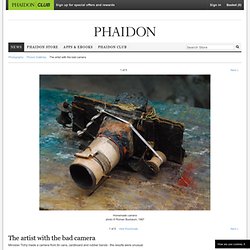 Indeed, Miroslav Tichý was often arrested for photographing unconsenting women at the local pool. He suffered from dementia and was viewed as somewhat of an outsider though his reputation has been reassessed in recent years and his photographs are currently on show as part of the Moscow Photo Biennale at the Multimedia Art Museum until April 1. Tichý's camera was cobbled together using found parts and everyday items such as tin cans, cardboard, bottle caps and rubber bands. Good Soldier Michals by Martin Filler. The photographer Duane Michals, who turns eighty on February 18, pursues a distinctive approach to his medium that seems all the more remarkable today for being so resolutely low-tech.

Michals relies only on available natural light, whether he works indoors or out; prefers to shoot in empty found spaces rather than in a studio; and generally favors unmanipulated black-and-white film over digital color—which taken together seems the visual equivalent of producing vinyl LPs in a world of MP3s. Michals pioneered the use of multi-frame series to create cinematic image sequences as brief as two photos or lengthy enough to fill entire books (of which he has produced more than twenty).

New York professor installs camera in head. Artist embeds camera in head A New York University Professor installed a thumb-sized camera in back of his head for art exhibitIraqi born photography professor had the procedure done at a piercing studio last monthThe camera will take a single snap-shot each minute of everyday activities for one year (CNN) -- Some students joke that their teachers have eyes in the backs of their heads. 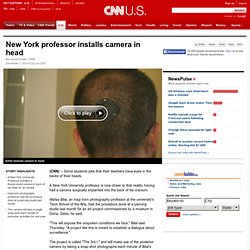 A New York University professor is now closer to that reality, having had a camera surgically implanted into the back of his cranium. Man Ray: National Portrait Gallery stages first museum exhibition devoted to photographer's portraits. The National Portrait Gallery is to stage the first museum exhibition devoted to portraits by the photographer Man Ray. 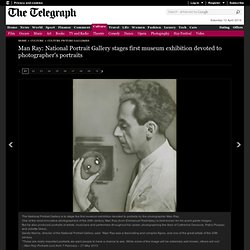 One of the most innovative photographers of the 20th century, Man Ray (born Emmanuel Radnitzky) is best known for his avant garde images.

No matter what his specific role in life and work, primarily, and most distinctively, he was a proselytizer for “the notion of photography as an alternative ‘language.’” It was Paul’s talent as meta-librarian—organizing vast troves of visual material and then parsing the ideas and interpretations therein—that lead Roy Stryker of the Depression-era Farm Security Administration Historical Section (later the Office of War Information) to hire him to arrange and classify the Section’s photographic collection. When the largely uncharted collection of FSA-OWI photographs was transferred to the Library of Congress in 1944, Paul went with it as Curator of the newly formed Prints and Photographs Division. It was only toward the later part of his career that Paul became a photographer himself. Photo credit: Photographer unknown.

BBC Radio 4 - In Our Time, The Invention of Photography.

Dara Scully. Bio blog fb ig prints a child is playing. Analogue. Atget Photography.com / Biography & Images / Videos Books & Quotes. Can You Hear A Photo? See A Sound? Artist Adam Brown Thinks So : The Picture Show. To Photograph Is To See. Photography: Access to Sightby George A. Covington Most people see to photograph, I photograph to see.

I was born legally blind with 20/400 vision in both eyes. Because of a combination of astigmatism, nastagmus, eccentric fixation and myopia (all acute) my eyesight was not optically correctable. Over the past twenty years, I have lost most of this vision due to a retina degeneration problem. The Business of Photography.

Abundant photography: the misleading metaphor of the image flood. “We’re exposed to an overload of images nowadays.” That was the impetus behind Erik Kessel’s 2011 “Photography in Abundance” installation, in which he printed off 1 million pictures to illustrate the number of daily uploads to Flickr. Kessels argues we confront a glut images on social media: Their content mingles public and private, with the very personal being openly and unselfconsciously displayed. Lost photographs from Scott of the Antarctic's doomed expedition. Watch: The Greatest Photography Documentaries. My Favorite Dirt Roads by Robert Kinmont.

Photography and the Law

Remembering Bonni Benrubi, Curator of Images. Abelardo MorellBroadway, from a room at the Marriott Hotel. Camera obscura photograph. The magazine lost a friend and colleague last week when Bonni Benrubi, the founder and director of the Bonni Benrubi Gallery died on Thursday. Strand: Under the Dark Cloth. October 16, 1890 – March 31, 1976 ‘It is one thing to photograph people. Moments of Reprieve: Representing Loss in Contemporary Photography at Visual Culture Blog by @MarcoBohr. Justin Coombes, Hokkaido Postcard, Artist’s book, 2011, The exhibition Moments of Reprieve: Representing Loss in Contemporary Photography is, in collaboration with Paradise Row, currently on display at the David Roberts Foundation on Great Titchfield Street in London.

By connecting photography with the manifold meanings of loss, the curators Louisa Adams and David Birkin dig into an intellectually and philosophically dense subject matter. The photographs, produced by ten different artists, were intelligently chosen for representing various notions of loss invoked by conflict, crime, disaster, war and ultimately death. That the scope and scale of this exhibition could easily be expanded is testament to a timely and well-conceptualized curatorial approach.

Stalingrad: Damaged Photos Tell the Story of an Epic WWII Battle. It’s sometimes easy to forget one particular, elemental truth: We live in a physical world. In a digital age — when so so much of what we see, hear and act upon is comprised wholly of incorporeal ones and zeroes — the physical world can sometimes seem insubstantial. Paradise Lost: Twisted Postcards From Dystopic Vacations. At first glance, Mary Lydecker’s colorful, kitsch postcards are seemingly innocuous, but look again and you’ll peer upon her world of dystopian leisure trips.