The jobs market is nowhere near as good as you've heard, and it's changing us. We are continually being told that more of us are employed than ever before. 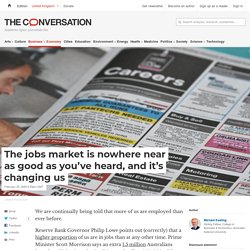 Reserve Bank Governor Philip Lowe points out (correctly) that a higher proportion of us are in jobs than at any other time. Prime Minister Scott Morrison says an extra 1.5 million Australians have found jobs since the Coalition took office, 260,000 of them in the past year. Yet in many ways the job market is weak, as unusually low wage growth and an uncommon reluctance to change jobs make clear. Young workers expect their older colleagues to get out of the way. There are many names for the narratives pitting the older generation against the younger: Gen-Y versus Baby Boomers, “Generation Me” versus “Generation We,” and unfortunately my research demonstrates that the younger generation do see the older generation as competitors. 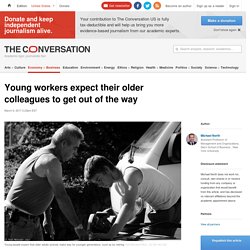 My findings show overall that younger people have certain expectations of older workers and people, characterised by an overall desire for older adults to cede resources, get out of the way and make way for younger generations. The 5 Best Industries for Job Seekers in 2017. Don't Make These Mistakes When Writing a Resume. 27 Jobs Where You Can Set Your Own Schedule. STEM Career Resources for Women. Credit: Minerva Studio/Shutterstock Science, technology, engineering and mathematics, collectively known as STEM, are fields that historically have been dominated by men. 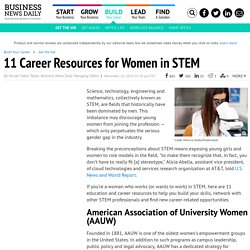 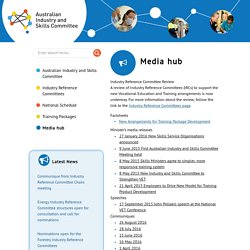 The Future of Jobs. The Hustle of Owning Your Own Company. Where Women Work job search. vWorker.com: How work gets done. Guaranteed! Freelancer.com is the world's largest freelancing, outsourcing, and crowdsourcing marketplace for small business. 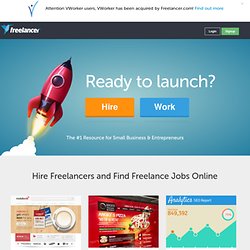 With over 10 million users, you can hire a freelancer to do your contract work at a fraction of the cost. Whether you need PHP developers, web designers, or content writers, you can outsource jobs within minutes. Browse through hundreds of skills including copywriting, data entry, and graphic design or more technical areas like coding HTML, programming MySQL, and designing CSS. Find Freelancers - 123,386 Freelance Jobs on PeoplePerHour.com. 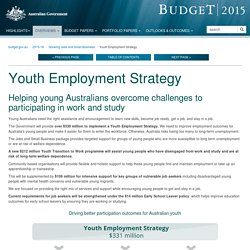 The Government will provide over $330 million to implement a Youth Employment Strategy. New employment programmes available from 1 July. The Australian Government has introduced a number of new initiatives starting from 1 July 2014 to help more Australians to move away from welfare dependency and into a job. 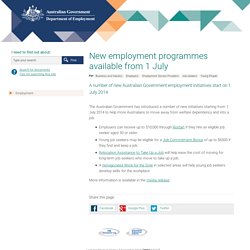 The recruitment process. The NSW Government sector recruits employees on the basis of merit. 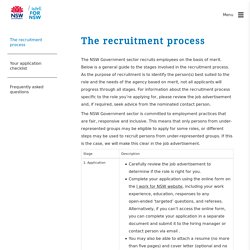 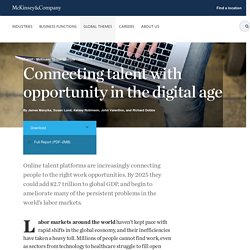 By 2025 they could add $2.7 trillion to global GDP, and begin to ameliorate many of the persistent problems in the world’s labor markets. Labor markets around the world haven’t kept pace with rapid shifts in the global economy, and their inefficiencies have taken a heavy toll. Millions of people cannot find work, even as sectors from technology to healthcare struggle to fill open positions. Many who do work feel overqualified or underutilized. These issues translate into costly wasted potential for the global economy. Podcast. Hire Freelancers & Find Freelance Jobs Online - Freelancer. LinkedIn lifts profit forecast as demand rises for hiring services.

LinkedIn, the operator of the world's biggest online network for professionals, reported better-than-expected quarterly revenue and profit as demand grew for its hiring services and the company raised its 2016 forecasts. 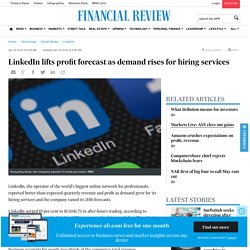 LinkedIn surged 19 per cent to $US141.73 in after-hours trading, according to Bloomberg. The shares had declined 55 per cent so far this year, before Thursday's results. Revenue from the company's talents solutions business, which connects recruiters and job seekers, jumped 41 per cent to $US558 million in the first quarter. The business accounts for nearly two-thirds of the company's total revenue.

LinkedIn has been buying companies, expanding its sales team and spending heavily to grow its presence in markets outside the United States, including China. Ideas for Australia: Degrees are more necessary than ever before, but the rewards aren't as great. The Conversation has asked 20 academics to examine the big ideas facing Australia for the 2016 federal election and beyond. The 20-piece series will examine, among others, the state of democracy, health, education, environment, equality, freedom of speech, federation and economic reform. Having a degree has become a basic prerequisite for most careers.

Those without a degree are more likely to be disadvantaged in career and economic terms. You could think of this as somewhat like mobile phone ownership. Twenty years ago, those of us without a mobile phone got by just fine – having one was a status symbol. Yet widespread participation in higher education has implications for individuals. Orange City Council, ABC Central West NSW - Australian Broadcasting Corporation. Regional NSW - Business & Industry in New South Wales. Regional New South Wales is the largest and most diverse regional economy in Australia. Jobs for NSW - Invest in New South Wales. Jobs for NSW is a private sector-led and NSW Government-backed initiative which aims to make the NSW economy as competitive as possible and therefore help create new jobs across the state.

The Intergenerational Report contains analysis of the key drivers of economic growth – population, participation and productivity – and examines what projected changes in these areas mean for our standard of living and public policy settings. Jobs and Workplace. Education and Training. Skills and training.

Developing your skills and the skills of your employees can help to keep your business competitive. Investing in skills and training can increase productivity and innovation, help you attract and retain high quality employees and improve customer satisfaction. Business and Industry. Pay - Fair Work Ombudsman. Our_services. JAYS v1n2 Denny 1. Theconversation. Young people have missed out at the expense older workers and migrants in the job market, according to new research on youth employment.