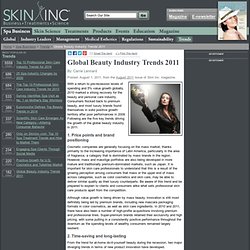 With a return to pre-recession levels of spending and 5% value growth globally, 2010 marked a strong recovery for the beauty and personal care industry. Consumers flocked back to premium beauty, and most luxury brands found themselves in solid positive growth territory after poor performances in 2009.

Following are the five key trends driving the growth of the global beauty industry in 2011. 1. Cosmetic companies are generally focusing on the mass market, thanks primarily to the increasing importance of Latin America, particularly in the area of fragrance, a category that is dominated by mass brands in the region. Although value growth is being driven by mass beauty, innovation is still most definitely being led by premium brands, including new mascara packaging formats in color cosmetics, as well as skin care ingredients. 2. 3.

Www.soilassociation.org/LinkClick.aspx?fileticket=VXH4reugSi0%3d&tabid=116&action_code=FgxRWxYUOVIKQV0YB0gD&td=TZLJbtswEIZfhdApASxG1BIrzqVFDmngGjmkRQs0AUGRY2tgihS4JHCLvHspW1l4Ir_5Z-e_DAaBOltl-16gsxrNl91EqLRDtsi26HwwYoCkWL8pEtfiHd_5Y4RFijRqewCX2E-Dz-A8hkPi. Media.wix.com/ugd/57afd5_c2c6e9f8fdb84465b5f594647b1d82a7. Lush Cosmetics: Secret Neuro-Marketing Geniuses. Lush are famous for their ethical products and charity work and it’s because of these values that they don’t advertise or market their products using traditional methods. 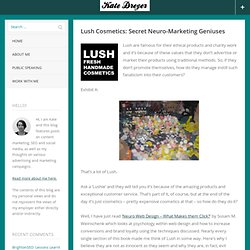 So, if they don’t promote themselves, how do they manage instill such fanaticism into their customers? Exhibit A: That’s a lot of Lush. Ask a ‘Lushie’ and they will tell you it’s because of the amazing products and exceptional customer service. That’s part of it, of course, but at the end of the day it’s just cosmetics – pretty expensive cosmetics at that – so how do they do it? Well, I have just read ‘Neuro Web Design – What Makes them Click?’ Social Validation - “We’re called to act when we know what others have experienced with a product.” The most easy way to encourage purchases using social validation is by showing reviews next to products and Lush does this really well: A review become more powerful when the person writing seems similar to us or when they write in a way that tells a story: Crazy.

Cosmetics & Toiletries Report from Ethical Consumer. Introduction - Marketing and multinationals plus natural, organic and free from labels Company profiles - an introduction to the big corporate players and the smaller companies. 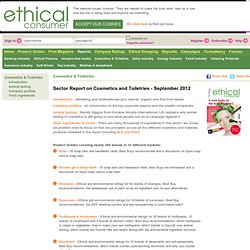 Market Trends show 2007 was busiest vegan year: 2008 most vegan ever. Plamil Foods MD Adrian Ling presents Dan Lyons from Uncaged with Arthur Ling Memorial Award for outstanding Vegan achievement (PRLEAP.COM) MiV, a new vegan consultancy, says “ All the signs point to the fact that key elements within the catering, retail and manufacturing industries have finally grasped the potential of veganism and ethical consumerism.” 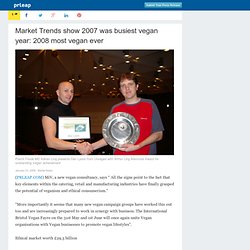 “More importantly it seems that many new vegan campaign groups have worked this out too and are increasingly prepared to work in synergy with business. The International Bristol Vegan Fayre on the 31st May and 1st June will once again unite Vegan organisations with Vegan businesses to promote vegan lifestyles”. Ethical market worth £29.3 billion A good example of this in action is Lush Cosmetics. Following a string of Vegan awards during 2007, including the RSPCA good business awards, Lush cosmetics’ vegan campaigns team were invited to speak in the UK houses of Parliament on ethical retailing. The European Market for Natural Cosmetics. #1001-60 The European Market for NATURAL COSMETICS (1st edition) European Sales of Natural Cosmetics Surge Natural cosmetic sales in Europe are increasing at a fast rate with revenues doubling every few years. 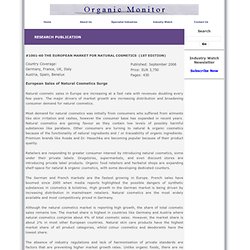 The major drivers of market growth are increasing distribution and broadening consumer demand for natural cosmetics. Most demand for natural cosmetics was initially from consumers who suffered from ailments like skin irritation and rashes, however the consumer base has expanded in recent years. Natural cosmetics are gaining favour as they contain low levels of possibly harmful substances like parabens. Other consumers are turning to natural & organic cosmetics because of the functionality of natural ingredients and / or traceability of organic ingredients. Retailers are responding to greater consumer interest by introducing natural cosmetics, some under their private labels. The German and French markets are the fastest growing in Europe. 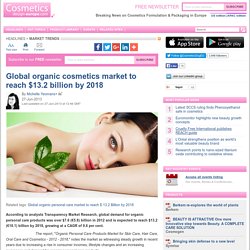 Widening distribution channels and new product developments are also pinpointed as contributing to the market growth while challenges are revealed to be a limited shelf-life, raw material supply and a stringent regulatory scenario over the next five years. Breakdown of countries seeing success In terms of organic personal care product consumption, the market researcher says Europe and Asia Pacific follow close behind North America in first place which accounted for 34.8 per cent of global demand in 2011, driven by new product launches and widening distribution channels. "The U.S. was the largest market for organic personal care products followed by Japan and Germany. Beauty Retailing - UK - 2014. Natural and Organic Beauty - UK - 2010. Beauty Retailing - UK - 2012. Beauty Retailing UK 2011. Beauty Online UK 2013.

Euromonitor Reports on the Beauty Industry Going Green. Posted: January 22, 2013 Last September, Paris hosted the 10th Beyond Beauty show, the inevitable meeting point for the aficionados of the beauty industry. 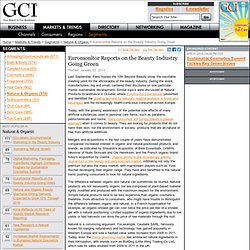 During the event, manufacturers, big and small, centered their discourse on one particular theme: sustainable development. Similar topics were discussed at Natural Products Scandinavia in October, where Euromonitor International presented and identified the growing demand for naturally healthy products in foods and beverages and the increasingly health-conscious consumer across Europe. Today, with the growing awareness of the potential side effects of many artificial substances used in personal care items, such as parabens, petrochemicals and toxins, many consumers are turning toward a greener approach when it comes to beauty. Www.ctpa.org.uk/annualreport/2011/files/assets/downloads/publication.pdf. Www.unipro.org/home/it/documenti/centro_studi/RAPPORTO_ANNUALE/Rapporto_annuale_2012_Cosmetica_Italia_DEF_ENG_WEB.pdf.