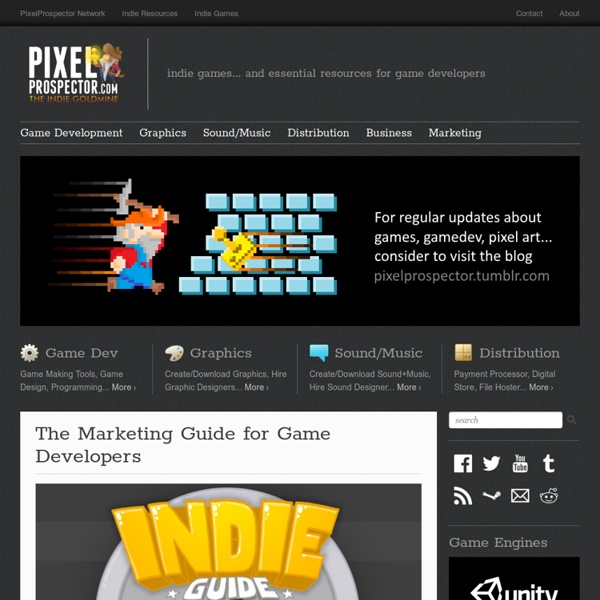 Video The Next Penelope is an upcoming futuristic action adventure racer/shooter from a top down perspective (which also offers a nice teleporting mechanic that you might know from the vertical shooter Velocity Ultra.) The game is still in early development… when it is finished it will be available for Windows, Mac and Linux. (Console ports are also possible). Boson X is a fast paced rotational 3rd person platformer about precise jumping. Highly recommended!

ModDB’s Top 100 Indie Games and Mods of 2009 « DIYgamer Polls closed yesterday for the first phase of the 2009 Mod and Indie Game of the Year competition, and today ModDB released the list of the top 100. Voting on this second list is open until Feb. 21, so anyone planning to vote has plenty of time to go over the list and pick their three favorite items. The same rules apply for the second phase; anyone can vote, but ModDB users’ votes carry more weight. Touch To Start Making Money With HTML5 – Update & Preview This is a quick post to announce that I’ve updated my book, Making Money With HTML5. The revision (version 1.5) introduces an overhauled design, some updated content and statistics, and new images.The upcoming major revision (version 2.0) won’t be ready until May 2014 at the earliest, so I’ve decided to publish this minor update in the meantime. Continue reading for more details. Continue Reading Read More » Online Income Report #022 – February 2014 Each month I publish a fully transparent income report which documents my online earnings. These income reports exist to demonstrate my progress, share my experiences, and motivate others who want to make money online.Check out my online income report for February 2014.

PixelProspector - the indie goldmine On the 30th July 2014 the site got updated, restrutured and redesigned… however the update is still not finished and thus this new Indie Resources overview page is partly incomplete. In case you are missing something you can still check out the outdated old Indie Resources page until the update is complete. Thank you for your understanding. (Game Making Tools, Game Design, Postmortems, Programming, Project Management…) (Create/Download Graphics, Hire Graphic Designer…) freeware of 2010 « reasons why it’s worth to be a pcgamer Below is a list of worthwhile freeware games released so far in 2010. Since all those games are free I didn’t use any truly harsh criteria For those games I didn’t play myself a positive opinion on either one of the source sites was good enough for me to include them on the list. -What does this sign mean?

Ten Tips for Becoming an Indie Game Developer Posted by Rampant Coyote on January 12, 2012 Post-Mortems on indie games always seem more interesting to me than post-mortems on big-studio games. It may be because they are just less conventional overall, or that the post-mortems I read of mainstream games usually conform to the Game Developer Magazine “5 things that went right / 5 things that went wrong” formula. I dunno. I really enjoyed Sophie Houlden’s post-mortem of Switft*Stitch, and the things that really hit home for me were the following comments:

Ludum Dare Ludum Dare 29 Theme Slaughter!! April 10th, 2014 1:16 pm With over 3000 themes suggested by the community, how do we make that more manageable? With this! Blog Archive » Freebies – Paper Models and Minis If you’ve got cardstock and ink to spare, there are a few places out there to download free paper models and minis that you print and put together yourself. I don’t use them very often but, when I do, they always add a nice element to my game. Here are some places to download them for free.