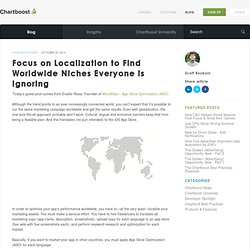 Although the trend points to an ever-increasingly connected world, you can’t expect that it’s possible to run the same marketing campaign worldwide and get the same results. Even with globalization, the one-size-fits-all approach probably won’t work. Cultural, lingual and economic barriers keep that from being a feasible plan. And this translates (no pun intended) to the iOS App Store. In order to optimize your app’s performance worldwide, you have to—at the very least—localize your marketing assets. Basically, if you want to market your app in other countries, you must apply App Store Optimization (ASO) for each language. And therein lies opportunity. Translating vs.

Some might think that localization is just a modern name for translation. Keyword Localization on the App Store The iOS App Store is divided by the countries in which it operates. The App Marketing Stack. InMobi - The Dev Masterclass Series: The “How the Hell Do I Choose App Store Keywords” Guide. One of the most important tools of your app marketing campaign (with or without paid acquisition) is Keyword Optimization (KWO). 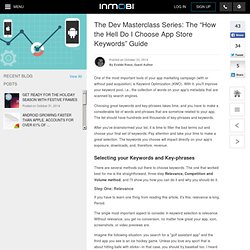 With it, you'll improve your keyword pool, i.e., the collection of words on your app's metadata that are scanned by search engines. Choosing great keywords and key-phrases takes time, and you have to make a considerable list of words and phrases that are somehow related to your app. The list should have hundreds and thousands of key-phrases and keywords. PixelProspector – the indie goldmine. Promoter – Track press about your games and apps. Automagically. Rami Ismail Opens Up distribute​() for Developers. Rami Ismail, Chief Executive of Business and Development at indie game studio Vlambeer, has created a new way for developers to keep track of press and distribution lists called distribute() (pronounced ‘do distribute’). 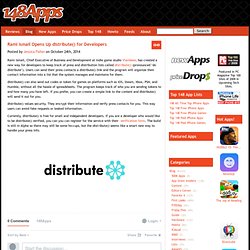 Users can send their press contacts a distribute​() link and the program will organize their contact information into a list that the system manages and maintains for them. distribute​() can also send out codes or token for games on platforms such as iOS, Steam, Xbox, PSN, and Humble, without all the hassle of spreadsheets. How to Get Your Game Covered by YouTubers.

An Indie Game Developer's Marketing Checklist (Including Portable Formats) There's no worse feeling than creating a game you're proud of, only to watch it drift off into obscurity. 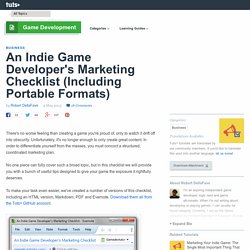 Unfortunately, it's no longer enough to only create great content. In order to differentiate yourself from the masses, you must concoct a structured, coordinated marketing plan. No one piece can fully cover such a broad topic, but in this checklist we will provide you with a bunch of useful tips designed to give your game the exposure it rightfully deserves. Distribute() An Indie Game Developer's Marketing Checklist (Including Portable Formats) Five PR tips indies really need. The indie "scene" has matured such that being independent is not necessary a raw, outlier move any more, but a viable avenue for doing business agilely, creatively and in a way that takes advantage of new, accessible platforms and funding models. 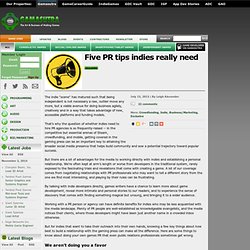 That's why the question of whether indies need to hire PR agencies is so frequently-raised -- in the competitive but essential arenas of Steam, crowdfunding, and mobile, getting covered in the gaming press can be an important key to attaining the broader social media presence that helps build community and sow a potential trajectory toward popular success. But there are a lot of advantages for the media to working directly with indies and establishing a personal relationship.

We're often kept at arm's length or worse from developers in the traditional system, rarely exposed to the fascinating trials and revelations that come with creating a game. You can do better than the old "It's like [Popular Game], only with [other feature]. " How to talk to the video game press in 2013. I gave a talk at GDC Europe today titled "Getting Your Independent Games Noticed in 2013". 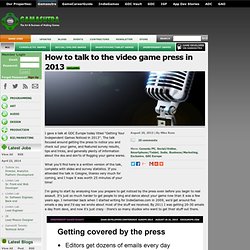 The talk focused around getting the press to notice you and check out your game, and featured survey results, tips and tricks, and generally plenty of information about the dos and don'ts of flogging your game wares. What you'll find here is a written version of the talk, complete with slides and survey statistics. If you attended the talk in Cologne, thanks very much for coming, and I hope it was worth 25 minutes of your time! I'm going to start by analysing how you prepare to get noticed by the press even before you begin to real assault. It's just so much harder to get people to sing and dance about your game now than it was a few years ago. Tale Of A Top-10 App, Part 2: Marketing And Launch. Advertisement Our anticipation was building. 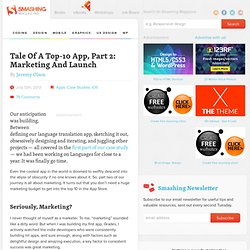 Between defining our language translation app, sketching it out, obsessively designing and iterating, and juggling other projects — all covered in the first part of our case study — we had been working on Languages for close to a year. It was finally go time. 15 Tips for Launching a Successful Mobile App. Edith Yeung is the head of marketing of Dolphin Browser, the world's first Gesture, Webzine and Add-on-enabled mobile browser. 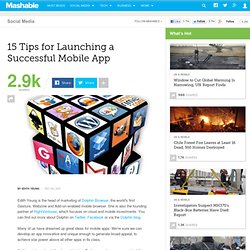 She is also the founding partner of RightVentures, which focuses on cloud and mobile investments. You can find out more about Dolphin on Twitter, Facebook or via the Dolphin blog. Many of us have dreamed up great ideas for mobile apps. We’re sure we can develop an app innovative and unique enough to generate broad appeal, to achieve star power above all other apps in its class. At this point, you've defined your big idea. The Ultimate iPhone App Marketing Strategy Guide. Updated: April 15, 2016 After a few app launches of our own, observing many more, talking with several app developers and testing cool services, we have a pretty really good idea of what can be done to make an app a success. 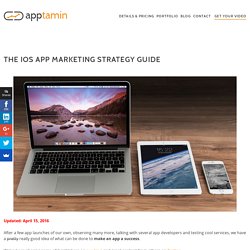 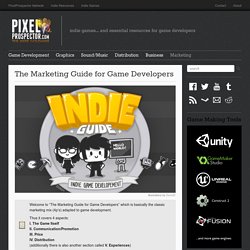 Thus it covers 4 aspects:I. The Game Itself II. Communication/Promotion III. Price IV. Guerilla Marketing and Community Building: Talk by Tanya Short. A couple of days ago, I attended a round-table discussion event set up by the IGDA Montreal. As is the case with every game dev event I’ve ever attended, it was awesome and extremely useful! Kyler (awesome Clever Endeavour artist) attended the collaborative game design talk while I attended Tanya Short’s talk about Guerilla Marketing and Community Building. This of course is of particular interest to me seeing as I’m the PR / marketing guy at CEG. Deep, meaningful image to spice up the page so you’re not seeing a wall of text Someone was offered a free drink for taking notes, and while I didn’t volunteer, I took some pretty in-depth notes. 1) A good game isn’t enough – there are plenty of amazing games out there, no one plays the ones they’ve never heard of. 2) Start marketing NOW – just go. 3) Measure and optimize your growth – treat your network as a game, where Twitter followers, Facebook likes, etc. are points, and try to win!