Barclay's: There's is nothing left to fight the coming economic storm. Special Report: Global Economy Dead In The Water. A Day Of Reckoning For The Euro Has Arrived - 26 TRILLION In Currency Derivatives At Risk. This is the month when the future of the eurozone will be decided. 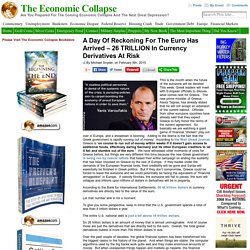 This week, Greek leaders will meet with European officials to discuss what comes next for Greece. The new prime minister of Greece, Alexis Tsipras, has already stated that he will not accept an extension of the current bailout. Officials from other eurozone countries have already said that they expect Greece to fully honor the terms of the current agreement. So basically we are watching a giant game of financial “chicken” play out over in Europe, and a showdown is looming. 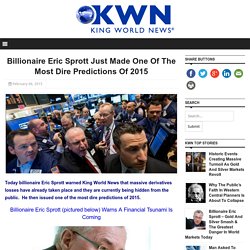 He then issued one of the most dire predictions of 2015. Billionaire Eric Sprott (pictured below) Warns A Financial Tsunami Is Coming Eric King: “What is going to trigger the disaster that brings the world back to reality?” Sprott: “There is no doubt in my mind that we are in the disaster. It is a disaster when a currency falls by 30 percent. Continue reading the Eric Sprott interview below… Advertisement To hear what billionaire Eric Sprott & Rick Rule are doing with their own money and which $7 billion company John Embry & Dr.

“The biggest issue is what’s happening in the derivatives market. One Percent Change = $10 Trillion! One quadrillion dollars is a very, very large amount. Chaos And Enormous Financial Destruction. Plummeting Oil Prices Could Destroy The Banks That Are Holding Trillions In Commodity Derivatives. Could rapidly falling oil prices trigger a nightmare scenario for the commodity derivatives market? 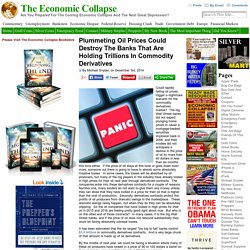 The big Wall Street banks did not expect plunging home prices to cause a mortgage-backed securities implosion back in 2008, and their models did not anticipate a decline in the price of oil by more than 40 dollars in less than six months this time either. If the price of oil stays at this level or goes down even more, someone out there is going to have to absorb some absolutely massive losses. In some cases, the losses will be absorbed by oil producers, but many of the big players in the industry have already locked in high prices for their oil next year through derivatives contracts. The companies enter into these derivatives contracts for a couple of reasons. WORLD BANKER MAKES STUNNING CONFESSION. Seeds being sown for the next GFC.

Lehman Brothers' collapse came after a raft of regulatory changes in the years leading up to the GFC.

Capitalism supposedly rewards risk takers. In the years leading up to the crisis, bankers, taking risks with other people's money, were rewarded alright. Then, when it all blew up they were rewarded again, first by not going to jail and then from having their pockets filled with free money. That they have managed to shift the burden of their mistakes onto taxpayers, have successfully watered down every attempt to restrict their activities, including Basel III and the Dodd-Frank Act, can only further their capacity for greed, stupidity and criminality. Before the crisis bankers hoped governments would rescue them; now they know they will. Having learned also that regulators are weak, politicians and ratings agencies can be bought and that no matter their crime, a banker never goes to jail, the seeds of the next crisis are already being sown. – senseih

Photo: Bloomberg The global financial crisis started in earnest with the collapse of Lehman Brothers in September 2008. 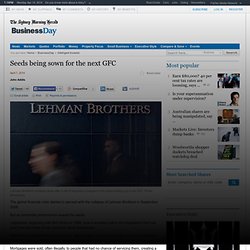 But an ensemble performance sowed the seeds. Legislators, beginning with Bill Clinton in 1999, took a wrecking ball to the regulations that had kept financial crises at bay since the Great Depression. Retail banks merged with trading banks, allowing them to punt ever-larger sums with depositor funds. House Of Rothschild Hoarding Gold In Face Of Coming Collapse? Pending market correction - Billionaires Dumping Stocks. A handful of billionaires are quietly dumping their American stocks . . . and fast. 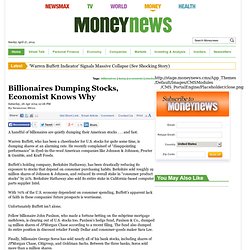 Warren Buffett, who has been a cheerleader for U.S. stocks for quite some time, is dumping shares at an alarming rate. He recently complained of “disappointing performance” in dyed-in-the-wool American companies like Johnson & Johnson, Procter & Gamble, and Kraft Foods. Buffett’s holding company, Berkshire Hathaway, has been drastically reducing its exposure to stocks that depend on consumer purchasing habits. Berkshire sold roughly 19 million shares of Johnson & Johnson, and reduced its overall stake in “consumer product stocks” by 21%. Berkshire Hathaway also sold its entire stake in California-based computer parts supplier Intel. With 70% of the U.S. economy dependent on consumer spending, Buffett’s apparent lack of faith in these companies’ future prospects is worrisome. Russia and China 'Furiously' Buying Up Gold As "a Global Currency Crisis – Albeit Unstated – is Underway" A larger global currency shift is underway… And it may be happening much more quickly than anyone has realized. 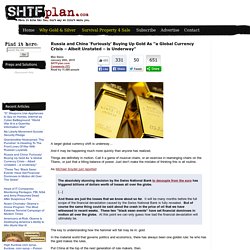 Things are definitely in motion.