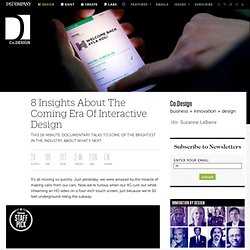 Just yesterday, we were amazed by the miracle of making calls from our cars. Now we’re furious when our 4G cuts out while streaming an HD video on a four-inch touch screen, just because we’re 50 feet underground riding the subway. Connecting is a short documentary by Bassett & Partners and Microsoft that explores how our lives (and our gadgets) have and will change in a more connected world. It’s 18 minutes long but very worth the time, as it features interviews with designers from Method, Twitter, Arduino, Frog, Stamen, Microsoft, and Nokia. What’s crazy, even with the magic of editing, is that so many of these talented perspectives tend to finish one another’s sentences. As you watch, you’ll see a general consensus on a few really important points. Our phones demand too much attention, detracting from our real experiences. But that doesn’t make any of the ideas wrong. [Hat tip: The Creators Project] Jinsop Lee: Design for all 5 senses.

The Technology of Touch. Tech Demos. Technology In session 1 of TED2013, we are meeting many new robots. 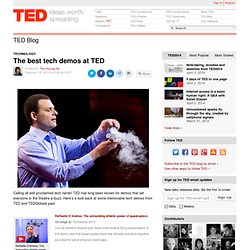 First, we watched the amazing clip above of a troupe of tiny humanoid Nao robots dancing intricate choreography in unison. (They were presented by Bruno Maisonnier of Aldebaran Robotics at TEDxConcorde and beamed straight to the TED stage.) Next, Rodney Brooks unveiled Baxter, the human–like […] Culture The Best Props at TED. Kill the Password. You have a secret that can ruin your life. 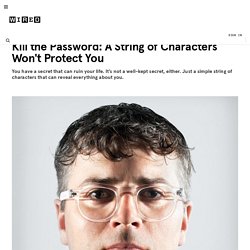 It’s not a well-kept secret, either. Just a simple string of characters—maybe six of them if you’re careless, 16 if you’re cautious—that can reveal everything about you. Your email. Your bank account. Your address and credit card number. No matter how complex, no matter how unique, your passwords can no longer protect you. Look around. This summer, hackers destroyed my entire digital life in the span of an hour. The age of the password is over. Since that awful day, I’ve devoted myself to researching the world of online security. First thing I do?

This summer I learned how to get into, well, everything. The common weakness in these hacks is the password. Passwords are as old as civilization. In 413 BC, at the height of the Peloponnesian War, the Athenian general Demosthenes landed in Sicily with 5,000 soldiers to assist in the attack on Syracusae. During the formative years of the web, as we all went online, passwords worked pretty well.

Eye Tracking. What if you could move a cursor on your TV with just your eyes? Or turn the page of an ebook without using your hands? These are the promises of PredictGaze, what’s basically (and somewhat allegedly) a series of ingenious algorithms by a team of garage engineers. PredictGaze can work with the lousy webcam in your smartphone, tablet, or laptop, and even in low-light conditions, track your eyes and identify your face to enable all sorts of futuristic controls.

One demo shows the iPad scrolling through eye movements alone. What makes this impressive? No doubt, Kinect could handle eye tracking were its cameras higher resolution. To be fair, all of this potential techno-magic makes me a bit skeptical that PredictGaze can work as well as advertised. I reached out to PredictGaze several weeks ago but never heard back, so I can’t speak to how realized these demos are. See more here. [Hat tip: Core77] [Eye Image: Morphart Creation via Shutterstock] Trend 2013. Yes, it’s already that transitional time when our current year ends and another begins, and today and tomorrow are quickly changing hands. Rather than look back at significant trends of the past 366 days (2012 was a leap year, remember?) , we asked a wide variety of technologists, designers, and strategists across Frog’s studios around the world to take a look to the future. The near future, that is. “Near” in that 2013 is not only upon us, but also “near” in that these technologies are highly feasible, commercially viable, and are bubbling up to the surface of the global zeitgeist.

We believe you’ll be hearing a lot more about these trends within the next 12 months, and possibly be experiencing them in some form, too. Smartphone accessories become smarter Assistant Vice President of Strategy Timothy Morey, San Francisco I recently interviewed a doctor who had used AliveCor’s iPhone ECG on a flight to diagnose a fellow traveler with a heart attack.

We lose control of our cars.