Driving in Portugal after Brexit. On 13th September 2018, the UK Government published its latest round of technical notices which included what will be required in the event of the UK leaving the European Union without a deal.Below is a summary of relevant notices to help understand what will happen in the scenario and what sort of actions that you should take. 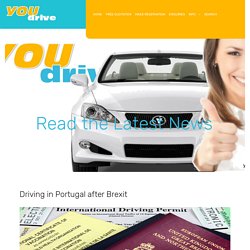 The good news is You do not need an International Driving Permit (IDP) to drive n Portugal unless the UK leaves the EU without a deal and you’re staying for more than 185 days. What happens when the UK leaves the EU and what will the impact be on driving abroad? This is entirely dependent whether a deal is struck and what sort of deal that is. However, in the event of no-deal being agreed, UK drivers taking their car to, or driving in EU states may require additional documentation to their UK driving licence. In the event of no-deal, what will I need if I take my car abroad? Which IDP will I require? Portugal Elected World’s Leading Destination. You Drive Car Hire New Responsive Site. Algarve - Europe's Top Golf Destination. Read important news and comments for car hire information. Faro Car Hire > Algarve > Portugal. Brits will need a DVLA code to hire a car in Algarve from 8 June. 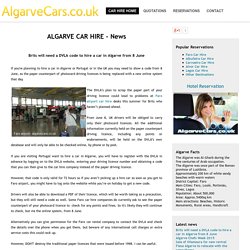 The DVLA’s plan to scrap the paper part of your driving licence could lead to problems at Faro airport car hire desks this summer for Brits who haven’t planned ahead. From June 8, UK drivers will be obliged to carry only their photocard licences. All the additional information currently held on the paper counterpart driving licence, including any points or endorsements, will be held on the DVLA’s own database and will only be able to be checked online, by phone or by post. However, that code is only valid for 72 hours so if you aren’t picking up a hire car as soon as you get to Faro airport, you might have to log onto the website while you’re on holiday to get a new code. 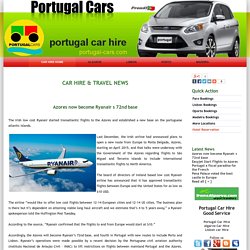 Last December, the Irish airline had announced plans to open a new route from Europe to Ponta Delgada, Azores, starting on April 2015, and that talks were underway with the Government of the Azores regarding flights to São Miguel and Terceira islands to include international transatlantic flights to North America. The board of directors of Ireland based low cost Ryanair airline has announced that it has approved transatlantic flights between Europe and the United States for as low as $10 USD. The airline “would like to offer low cost flights between 12-14 European cities and 12-14 US cities. Easyjet Start Flights to Azores. Easyjet Start Flights to Azores London based low-cost easyJet was the first foreign carrier to take advantage of the new liberalization policy by establishing four flights a week between Lisbon and Ponta Delgada, starting March 29. 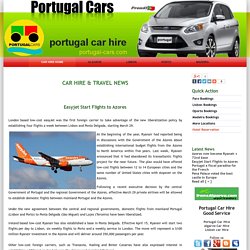 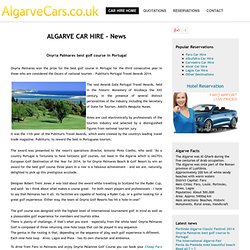 Garrett McNamara surfed the Gasoline. Portugal Car Hire Busy Summer Expected. Following the trend observed in recent months, it is expected a significant increase in tourists in the Algarve this year. 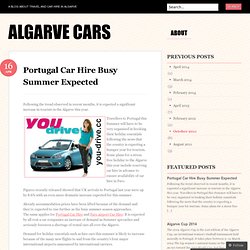 Travellers to Portugal this Summer will have to be very organised in booking their holiday essentials following the news that the country is expecting a bumper year for tourism. Some plans for a stress free holiday to the Algarve this year include reserving car hire in advance to ensure availability of car hire in Faro. Figures recently released showed that UK arrivals to Portugal last year were up by 8.6% with an even more dramatic increase expected for this summer. Already accommodation prices have been lifted because of the demand and they’re expected to rise further as the busy summer season approaches. 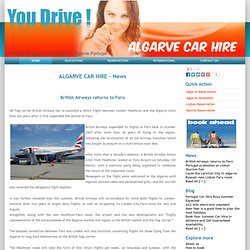 British Airways suspended its flights to Faro back in October 2007 after more than 40 years of flying to the region, following the termination of its GB Airways franchise which was bought by easyJet in a multi-billion euro deal. Car Rental in Portugal. Portugal is located in South-Western Europe, on the Iberian Peninsula, and it is the westernmost country of mainland Europe, being bordered by the Atlantic Ocean to the west and south and by Spain to the north and east. 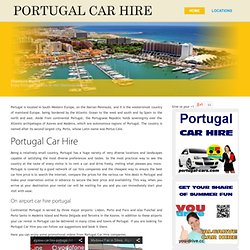 Aside from continental Portugal, the Portuguese Republic holds sovereignty over the Atlantic archipelagos of Azores and Madeira, which are autonomous regions of Portugal. The country is named after its second largest city, Porto, whose Latin name was Portus Cale. Faro airport Car Hire Algarve Portugal. Loulé the Carnival City in Algarve. 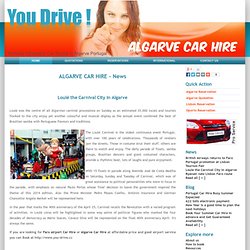 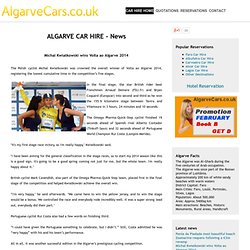 In the final stage, the star British rider beat Frenchmen Arnaud Demare (FDJ.fr) and Bryan Coquard (Europcar) into second and third as he won the 155.9 kilometre stage between Tavira and Vilamoura in 3 hours, 24 minutes and 10 seconds. The Omega Pharma-Quick-Step cyclist finished 19 seconds ahead of Spanish rival Alberto Contador (Tinkoff-Saxo) and 32 seconds ahead of Portuguese World Champion Rui Costa (Lampre-Merida).

"It's my first stage race victory, so I'm really happy," Kwiatkowski said. "I have been aiming for the general classification in the stage races, so to start my 2014 season like this is a good sign. “I'm very happy," he said afterwards. Portuguese cyclist Rui Costa also had a few words on finishing third. Algarve Car Hire Portugal. Algarve Cup 2014 The 2014 Algarve Cup is the 21st edition of the Algarve Cup, an invitational women's football tournament held annually in Portugal. It takes place between 5–12 March 2014 The top women's national teams in the world have an eye toward the 2015 World Cup, but they must first compete for a title in the prestigious 2014 Algarve Cup.

This year's event will once again take place in Portugal and will feature 12 squads battling in a round-robin tournament. However, only the top eight-ranked teams (included in Groups A and B) have a chance to come away as winners. Lisbon and Oporto top cities for foreign investors. Lisbon and Oporto top cities for foreign investors Lisbon and Oporto have been placed second and third in a list containing the most attractive cities for foreign investment. Overall for Europe, the Portuguese capital was placed 22nd while London has retained its position as FDI’s European City of the Future 2014/15. Germany’s Nordrhein-Westfalen has sailed to the top to rank first among Europe’s regions. London ranked first place in the Economic Potential category for major European cities, thanks to its vast and growing market and its significant FDI attraction – particularly in the software and IT, business services, and financial services sectors.

For European Regions of the Future, Nordrhein-Westfalen ranked first, rising six places from the previous ranking in 2012/13. In southern Europe, Barcelona topped the list, followed by Lisbon and Oporto. Porto is the best European destination of 2013. Porto is the best European destination of 2013 Porto was named by Lonely Planet as the best of 10 holiday destinations of choice in Europe in 2013, in new international distinction promoted by leading global publisher in the publication of guidebooks. According to reports from the Tourism Association of Porto (ATP), the Port and the Douro region was ranked 'first' by the editors and columnists of Lonely Planet Travel, a list that also includes Budapest (Hungary), Moravia (Czech Republic) , Bern (Switzerland), Marseille (France), Zagreb (Croatia), Copenhagen (Denmark), Cinque Terre (Italy), North Iceland and Northern Ireland, writes Lusa.

The Lonely Planet list for 2013 includes destinations that their editors classified as hot spots to visit, as well as cities already known, but they now have something new to offer. Faro Car Hire Portugal. Festival Med Loule It is already in 28th and June 29th that irresistible streets, alleyways and squares of the historic center of Loulé will again be invaded by thousands of people in search of the best music, crafts and cuisine come a little all over the World. The event, an organization of the Municipality of Loulé and this year marks its tenth edition, promises many hours of deep animation, unforgettable experiences and many discoveries. Alvor dive park with one more ship.

Alvor dive park with one more ship. New boat for diving park in Alvor. New ship for diving park in Alvor. Taxi Ferry links Portimão and Ferragudo. Taxi Ferry links Portimão and Ferragudo A new taxi-boat service between Portimão and Ferragudo (Lagoa) has been launched, filling a niche sought after by a growing number of residents and tourists. Rui Manuel Modesto, head of the Taxi Ferry company, says the venture has been launched to “satisfy a need” that had become obvious. Faro airport in Algarve general information and car hire. ^ Use this form to make your Booking for Faro aiportCar Hire ^ Unique cultural and gastronomic tourism experiences.