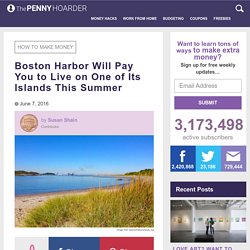 The Boston Harbor national recreation area is seeking seasonal island caretakers — and the gig sounds so cool that I might just pack my bags and go. If you love nature and are seeking an escape from the city, keep reading… How to Become a Seasonal Island Caretaker As an island caretaker, your duties would include helping and interacting with visitors, grooming trails and managing volunteers and their projects. The position starts in mid-June and runs through early September. The pay is $1366.80 bi-weekly, which comes out to about $2733 per month. “I Want to Make Money From Anywhere in the World – Where Should I Start?” An old friend visited Bali a few weeks back and we had a great time catching up on life. 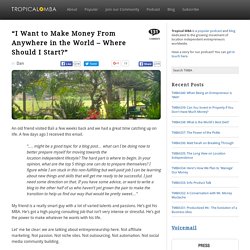 A few days ago I received this email. “…. might be a good topic for a blog post… what can I be doing now to better prepare myself for moving towards the location independent lifestyle? The hard part is where to begin. In your opinion, what are the top 5 things one can do to prepare themselves? Get a Free Car to Drive on Your Next Road Trip. Tips for living out of your car during a road trip. Living out of your car during a road trip has its perks; photo by Brandon Scherzberg Luxury takes on new meaning when one attempts to live out of one’s car and, on road trips, it can be especially tricky to navigate your increasingly shrinking living space. 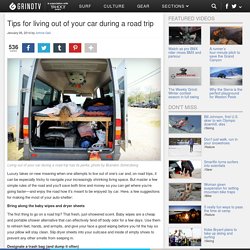 But master a few simple rules of the road and you’ll save both time and money so you can get where you’re going faster—and enjoy the road how it’s meant to be enjoyed: by car. Here, a few suggestions for making the most of your auto-shelter: Dream of Living in an RV? Here’s How to Make Money From the Road. My wife and I were camping at a hot spring in Arizona when a small camper van pulled in. 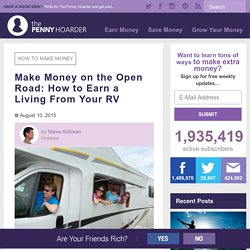 We watched a man get out and remove many large plastic bags, which he piled on the roof. He was making room so he could spend the night in his home-on-the-road. Later, around a campfire, we asked him about the bags. They were full of used stuffed animals he bought at thrift stores, and he said he made about $4,000 per month selling them alongside various highways and roads as he travelled. It may be an unusual way to make a living, but according to Workamper News, many people live in and work from motor homes, trailers, truck campers and conversion vans. 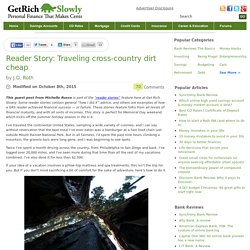 Some reader stories contain general “how I did X” advice, and others are examples of how a GRS reader achieved financial success — or failure. These stories feature folks from all levels of financial maturity, and with all sorts of incomes. This story is perfect for Memorial Day weekend, which kicks off the summer holiday season in the U.S. 10 Tips for a Successful Car-Camping Road Trip. A few years ago, my husband and I took a monthlong road trip through the American Northwest, starting in Mammoth Lakes, California, and making a big loop through Nevada, Idaho, Wyoming, Montana, Washington, and Oregon. 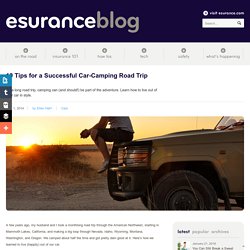 We camped about half the time and got pretty darn good at it. Here’s how we learned to live (happily) out of our car. Signal Mountain Campground, Grand Teton. Advice regarding extended road trip or living out of a vehicle... - travel roadtrip vans. Experience: I live in my car. On 12 July 2006, I shut the door to "normal" life for the last time and went to live in my car. 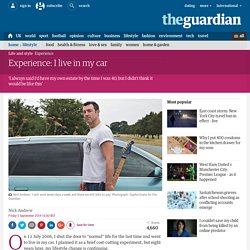 I planned it as a brief cost-cutting experiment, but eight years later, my lifestyle change is continuing. How to fund cross country driving for a living. So you want to be a travel blogger. If there is one question I get asked more than anything in the world, it has to be the dreaded “how do you make money?” 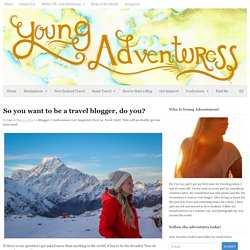 I kid you not, 99 out of 100 times when I tell people I am a professional travel blogger, that question pops up at one point or another, generally accompanied with a look on their faces like I’ve grown a second head. Sometimes it’s subtly snuck into the conversation masked with hoity toity language like, “so do you find travel blogging to be a fiscally sustainable option in this day and age?” 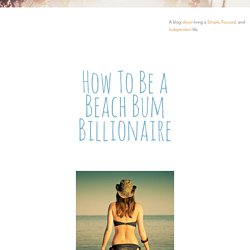 It’s a person that balances the freedom of a beach bum and the access of a billionaire. These disparate lifestyles are in some ways similar and in others opposite. Some would look down on the beach bum, while revering the billionaire, when in fact both lifestyles have their pros and cons. Make Money and Travel - RV Geeks. This Make Money and Travel series exists as a source of inspiration. 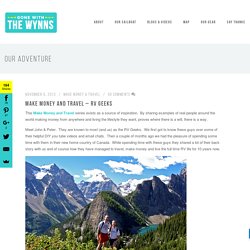 By sharing examples of real people around the world making money from anywhere and living the lifestyle they want, proves where there is a will, there is a way. Meet John & Peter. They are known to most (and us) as the RV Geeks. We first got to know these guys over some of their helpful DIY you tube videos and email chats. Then a couple of months ago we had the pleasure of spending some time with them in their new home country of Canada. Back in April of 2003 these two sold everything, bought an RV (even though neither of them had ever been in one) and hit the road full time. Peter was diagnosed with Cancer at the young age of 37, only two months after meeting John, and they decided change was on the horizon.

Earning A Living On The Road. Though any job performed while living in an RV would fall under the broad definition of workamping, in this section we are talking about jobs that could be done from a sticks & bricks home. If you really need to earn quite a bit of money on the road to support your lifestyle, many workamping jobs would not be sufficient. Often you can work for a local company in the area of your desire and earn more money. Though most workamping positions include a "free" campsite, you may find that it is financially better to pay for a campsite and take a more traditional position in the location you desire. Also, if health insurance and other traditional employee benefits are important or even necessary, traditional employment while living in the RV may be the best option. With the continual improvement of mobile technology, it is becoming easier and easier to work from a mobile office.

Some people just take the jobs they had before full-timing and take them on the road. How RVers make money while living on the road. The most important thing to realize about making a living while on the road is that you won't need anywhere near as much income as you need now. That's what makes the RV lifestyle possible for so many people. When you cut your living expenses down to less than $1,000 a month, earning a living becomes so much easier.

If you do much boondocking (camping free where there is no water, electric or sewer connections), you can easily get your expenses down below $1,000 a month. Of course, if your budget is $2,000 a month, you can live less frugally, travel more, stay in nicer RV parks, boondock less, go out to eat more and do a few more tourist things. Ten Unsual Ways to make A Living on the Road - Tom Thumb. The International Writers Magazine: Travel Tips The truth is the only limits to finding ways to make a living on the road are your imagination, courage and acumen. Here are ten ideas to get you started: 1. Bucket List Ideas: 101 Things To Do Before You Die. “Every man dies – Not every man really lives.” ~ William Ross“The only people who fear death are those with regrets.” ~ Author Unknown A few days ago, I was surfing online when I came across someone’s bucket list.

It quickly inspired me to create my own list and write an article about it at the same time. How To Finance Your Dream Trip. Asserting that you’re going to travel once and for all is the first domino which sets everything in motion. As self-helpish as it sounds, the hardest part of travel is simply deciding to. After that, everything falls into place. Setting a budget is crucial to breaking down the process into manageable bits.

Your budget should include plane tickets, food, accommodation, transportation, and recreational expenses. Maps Built for Travelers.