United Kingdom's Coolest Neighbourhoods. Hipster Neighborhoods - The Brooklyn of Every State - Thrillist. Though pockets of it are still holding strong, most of Brooklyn has been swept by a sea of trilby-wearing millennials with waxed beards, who just wanna give back to the neighborhood with an artisanal dog treat shop, you know? 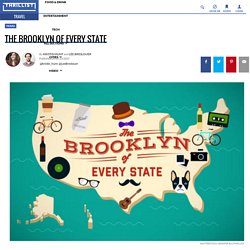 But the New York borough is far from the only gentrified hotspot in America. We rounded up the most Brooklyn 'hood in every single state, based on metrics including trendy restaurants, "craft" cocktail bars, bike friendliness, and, of course, urban expansion. By the time you finish reading the list, they probably won't be cool anymore, so hurry up: Avondale (Birmingham) Occupancy in this Birmingham 'hood shot from 25% to 75% in just four years as more and more young people discovered its potential.

Top 5 hipster neighbourhoods in Canada. Living in Melbourne: City guide - Travel. Australia's second city has long been a draw for those seeking a great work-life balance. 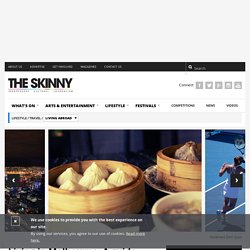 Here's a guide for anyone thinking of taking the plunge Hipster paradise, bookworm borough, jock haven and foodie favourite – the many sides of Melbourne are a tantalising draw for ex-pats looking for warmer climes. While there are unglamorous sides to the Victorian capital, for the most part the unsightly moments are confined to socialising with British neds, drinking cheap wine in backpacker hostels. The Hipster’s Guide to Going Out in Leeds. A Guide to Atlanta's Hipster Neighborhoods - This Is My South. Just as Nashville has become a haven for the young and hip, a recent influx of transplants looking for cheap places to live, as well as great restaurants and markets, have turned Atlanta into hipsterville. 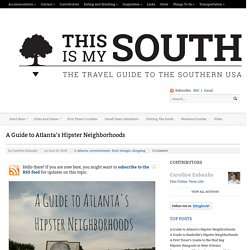 It’s even been listed as one of the top 35 cities for hipsters by Travel + Leisure, alongside Savannah, New York, Portland and San Francisco, among others. So should you be on the lookout for coffee shops, music venues and dive bars frequented by your peers, you just have to know where to look. East Atlanta Village Delia’s Chicken Sausage Stand. 10 of the best breakfast and brunch spots in Berlin. Cafe Wintergarten im Literaturhaus Just a few steps down an elegant side street off Berlin's famed Kurfürstendamm is the Literaturhaus, a literary salon that hosts readings and exhibits housed in a turn-of-the-century villa. 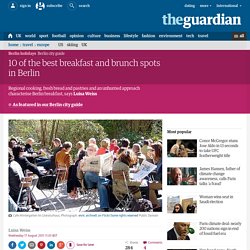 There's a bookshop at the ground level, while the top floor of the villa houses an atmospheric cafe that is especially lovely at breakfast time. The breakfast offerings range from smoked salmon on rye with a glass of champagne, to two poached eggs with a roll; and from quinoa and amaranth müsli to waffles with fresh berry compote and cream. Berlin's 10 Best Gallery Spaces. Share The main exhibition space of Sprüth Magers' Berlin Gallery Photo: Courtesy Sprüth Magers Berlin London The exterior of Capitain Petzel Gallery on Karl Marx Allee Photo: Stephan Müller via Capitain Petzel Perhaps more than any city around the globe, the German capital has a remarkably wide range of commercial environments in which to see art—some of its best, too. 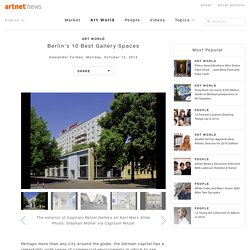 London: The Hidden City – 10 Secret Places in London You Probably Didn't Know About. Welcome to London Below, the city hidden within a city. 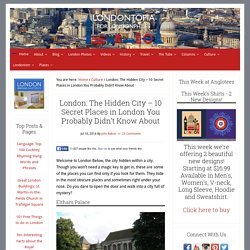 Though you won’t need a magic key to get in, these are some of the places you can find only if you look for them. They hide in the most obscure places and sometimes right under your nose. Do you dare to open the door and walk into a city full of mystery? Eltham Palace. Best Hipster bars in Brighton, United Kingdom. The Hipster’s Guide to Going Out in Leeds. Ain’t nothing wrong with being cool, so why not check out the hottest hipster joints in town? 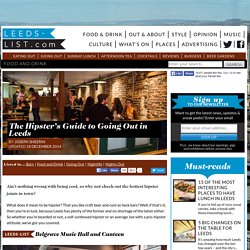 What does it mean to be hipster? That you like craft beer and cool as heck bars? Well, if that’s it, then you’re in luck, because Leeds has plenty of the former and no shortage of the latter either. So whether you’re bearded or not, a self-confessed hipster or an average Joe with a pro-hipster attitude, we’ve got you covered. Hipster Guide to Berlin. It’s undoubtedly Europe’s coolest city. 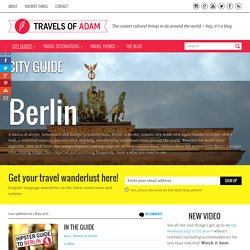 With 24-hour nightlife, a growing culinary scene and affordable living, Berlin has attracted people from all over the world. DJs want to play Berlin’s clubs (some of the best in the world) and artists want their work shown in the hundreds of independent galleries. Simply heaven - Berlin at Christmas time!

Berlin Area Guides. When you're planning a trip to Neukölln - the latest Berlin borough to be hailed as the centre of all things hip - Google Street View is of no use to you. 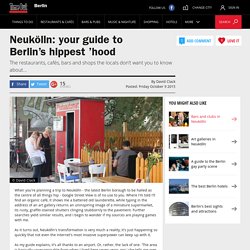 Where I'm told I'll find an organic café, it shows me a battered old launderette, while typing in the address of an art gallery returns an uninspiring image of a miniature supermarket, its rusty, graffiti-stained shutters clinging stubbornly to the pavement. Further searches yield similar results, and I begin to wonder if my sources are playing games with me. Berlin city guide.

Berlin Art – Guide to Galleries – Time Out Berlin. London has its pubs, New York its delis and in Berlin, it's impossible to fling a currywurst without hitting an art gallery of some kind. 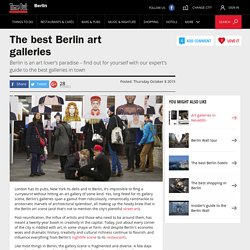 Yes, long feted for its gallery scene, Berlin's galleries span a gamut from ridiculously, romantically ramshackle to aristocratic marvels of architectural splendour, all making up the heady brew that is the Berlin art scene (and that's not to mention the city's plentiful street art). Post-reunification, the influx of artists and those who need to be around them, has meant a twenty-year boom in creativity in the capital. Galleries. The Needle: Sharp on Berlin. Friedrichshain-Kreuzberg. Friedrichshain-Kreuzberg – © Christian Kruppa Friedrichshain-Kreuzberg is set in the heart of Berlin, on either side of the River Spree, on the border between east and west.

It is one of Berlin's most interesting and fascinating districts. You'll experience urban buzz, vibrancy and diversity here at every turn. The streets and buildings have retained their very special atmosphere. The district's most well-known landmark is the listed Oberbaumbrücke bridge with its striking towers.More information ... Highly recommended. Berlin Pass - The Berlin Sightseeing Pass. 10 of the best museums in Berlin. Käthe Kollwitz Museum Of all Berlin's artists, no one captured the pain suffered in and exported from this place more than Käthe Kollwitz.

The intense intimacy of her work revealed residents' hopes and horrors, as well as the unspoken pains of the poor, in images and forms which – 60 years after her death – still appear to burst from the artist's heart. My city: Berlin with Andreas Schneider - video. 10 of the best cafes and bakeries in Berlin. Oliv Café Charcoal walls, modernist chairs and slab tables give this corner cafe on a happening street in Mitte a contemporary edge; but this is the place to go for homey slices of German cheesecake made with Quark, jars of puckery fruit crumble and wedges of flourless chocolate cake.

The baristas at Oliv are experts and the coffee is delicious, as are the sandwiches and vegetable quiches served with a tangle of greens for lunch. In warm weather, customers cluster around small wooden tables on the street. 10 of the best cocktail bars in Berlin. Beckett's Kopf It's unmarked save for an eerily glowing photograph of Samuel Beckett in the window, so you'll need to ring a doorbell to gain access to this Prenzlauer Berg bar. Inside are two elegant, dimly lit rooms (one reserved for smokers) with low tables and chesterfield sofas. The comprehensive drinks list – ensconced between the pages of a Beckett tome – is divided into sections such as fresh and funky, and herbal and floral, and always features seasonal specials.

The ice is hand-cut, and staff are happy to tailor-make drinks for the undecided. 10 of the best bars in Berlin. Barbie Deinhoff's With charismatic customers clad in studded jockstraps and gimp masks, it's safe to say that Barbie Deinhoff's attracts people of all persuasions. Sophisticated, ruby-lipped cross-dressers rub shoulders – and other body parts – with louche local artists and intellectuals, while students lap up the raucous atmosphere and cheap prices.

48 hours in Berlin. Why go now? 10 of the best galleries in Berlin. East Side Gallery Berlin. 10 of the best bars in Berlin. 10 of the best museums in Berlin. The Secret Bar Behind the Boulangerie François - finding berlin. I always forget that this part of Friedrichstrasse exists. But walking up to the spotlit bright blue exterior of the BOULANGERIE FRANÇOIS, with all these fancy people queuing up behind the red rope in heels (HEELS! FINDING BERLIN / FROM DÖNER TO DÖNER. Bar & Food Night at Neue Heimat. To trans­form an old rail­way sta­tion into an urban space for con­certs, street food and hap­pen­ings of diverse nature is a very good idea in and of itself already. But the Neue Heimat venue has actu­ally also brought life into an almost for­got­ten area of the city, too (for­got­ten by me, mostly). Every street between Warschauer Straße and Box­ha­gener Platz was taken over by binge-drinking pub­crawl­ers who were look­ing for a cheap Ber­lin thrill and every­one I know moved away as quickly as pos­sible.

No won­der Revaler Straße has been called the “Techno-Strich” for a while now, although to be com­pletely hon­est, I don’t even know if that still applies (it looks fairly res­id­en­tial to me now). Now Neue Heimat is bring­ing me back to Friedrich­shain exactly how I want it: by lur­ing me with food and drinks. It all star­ted with the Ber­lin Vil­lage Mar­ket, a street food mar­ket with all sorts of global won­drous snacks and sand­wiches. The world's most 'hipster' neighbourhoods.

Williamsburg, New York Williamsburg is the epicentre of New York hipsterdom, where you’re not allowed in without an asymmetrical haircut and an ironic tattoo. Top Hipster Destinations « Travelanthropist. A Breakdown of the Paris Arrondissements by a Sassy New Yorker. Is there a city quite as impressive and daunting as Paris? Planning a trip to the city of light can be challenging, especially when it comes to finding a place to stay. With 20 neighborhoods (arrondissements) to chose from, looking for accommodation can be terrifying, at least it was for me last spring when I was planning a 5 day trip to Paris.

Best hidden bars in Berlin. Stagger LeeSchönebergHow to get in: Full disclosure -- this place isn't entirely hidden, but it does remain one of Berlin’s best-kept secrets thanks to the lack of hype about its location, its low-key facade, and its speakeasy attitude. The bar: With its low-hanging saloon lamps, wooden paneling, and a large mechanical till, SL takes you right back to the prohibition era. The knowledgeable staff serves well-crafted unusual cocktails, but you might want to kick the night off with the Alabama Song if you really want to stay in context. Berlin Drinking – Best 30 Bars – Time Out Berlin. © Thilo Reich With its cheap beer and non-existent licensing laws, you might think Berlin is overrun with drunken stags on an Irish pub crawl, but instead you'll find a rich and very civilised drinking culture.

London guides. USE-IT Brussels. Hipster City Travel Guides. Shares Hipster City Guides Where are you going? Simply click on the city you’re planning to visit to view my travel tips. Each guide includes information on the best bars, nightlife, food, restaurants and things to do. Share with your friends I read this article and found it very interesting, thought it might be something for you. Submit. EUROPE.