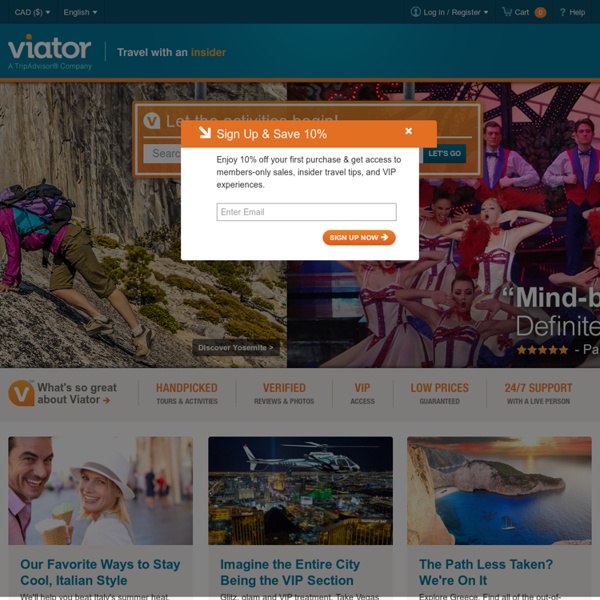 Athens Airport Buses - Bus X95 and X96, the cheap way into Athens Unwilling to pop 40-50 Euro for a taxi into Athens? Consider taking the Athens Airport Bus. Most of these buses usually run 24 hours a day, though service on some lines can be almost nonexistent between midnight and dawn. Tours and activities: Still looking for breakthrough company This is part two of our three part series on the online tours and activities market, focusing on the buzz around venture-backed startups in the space. Part one here. There are only a handful of companies that matter these days in selling tours and activities, and they are a mix of old-guard established companies, a hungry wannabe, and an online travel agency making some overtures. Tokyo's best souvenirs Going home to see the family? Got a client coming to visit? First time in Tokyo and searching for a hip souvenir? Selecting gifts can be a nerve-wracking experience, no matter if you’re just passing through or trying to take a bit of Tokyo home with you. It’s not just a matter of what to buy, but also where to get it. Omiyage (souvenirs) can be found practically anywhere and there’s a vast range of gifts and souvenirs on sale in the city.

Athens Guide: Public Transportation, buses, trolleys Athens City Buses Yellow Trolleys and Blue Buses can take you anywhere in the city and in the suburbs.The Trolleys run on electricity and the stops are usually yellow. The Blue bus-stops are blue. Tickets cost 1 Euro and must be bought from a kiosk or at special stands in main squares and at some bus terminals. They are sold individually or in bundles of 10 and must be validated by a machine on the bus. Priceline’s Booking.com triples mobile booking transactions - Mobile Commerce Daily - Revenue The Booking.com Kindle Fire app Priceline’s Booking.com has seen the total transaction value of mobile hotel bookings rise from $1 billion in 2011 to more than $3 billion in 2012. In addition, more than 20 million mobile applications have been downloaded to date. The latest data is proof that mobile bookings are growing – especially because of its convenience.

Kea Hiking by Ecotourism-Greece.com Kea is a hiker’s paradise. Sign-posted paths of total length of 36 kilometres, at least half of which are cobblestone, run through dreamy routes and dense forests with oaks and lead to beautiful isolated beaches. There are hiking maps you can buy on the island with many routes. There are also gravel hiking roads off the beaten path, such as those in Kalogerados and of the Pera Meria. GetYourGuide raises $14M for tours and activities push in new markets In what could be one of the biggest investments so far in the growing online tours and activities sector, GetYourGuide has grabbed $14 million from Spark Capital and Highland Capital Partners Europe. The company says the Series A investment round will be used help with “rapid growth” into new markets. Spark has previous invested in companies such as Twitter, Tumblr, Foursquare and Akamai, while Highland’s portfolio includes Lycos, MapQuest and VistaPrint. The level of investment in GYG signifies the major interest in the tours and activities segment of the industry. Previous high rounds included $7 million into US-based Zozi in May 2011. Despite attracting $2 million from PROfounders Capital, Andy Phillipps (founder of Active Hotels) and Karen Hanton (founder of TopTable) in March 2012, Europe-based GYG has been active on the capital raising circuit since late last year.

Mountaineering-Hiking You can explore Greece’s variety of landscapes, remote coves and the ruins of ancient cities, walking! Greek islands and mainland are a hiker's paradise with numbered routes, and well-organised systems of trails. Discover “the unspoiled Greece” while following walking paths through wild flowers, lush valleys, ancient sites, watermills, and old pathways. Get to know the locals, drink wine with them, and taste the food in restaurants and tavernas. You can also find local guides who lead botanical tours along the ancient paths of the islands, while sharing with you their knowledge on folklore, history, agriculture, and archaeology. Master with them the ancient art of bee-keeping and find out how old remedies made from herbs and flowers heal new wounds.

Almost Untouched Nature - Waterfall Restaurant, Philippines Image credit Visiting this interesting Waterfall Restaurant located in San Pablo City, Philippines at the Villa Escudero Plantations and Resort can be a truly unique and memorable experience. Visitors can enjoy in lunch served on bamboo dining tables while the crystalline running water flows under their feet.