Airbnb and Female Business Travelers: The Challenge – Skift. Airbnb’s strengths can also be liabilities for many solo female business travelers. 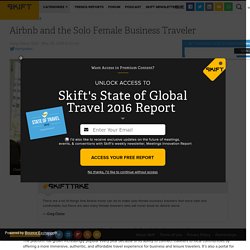 The platform has grown increasingly popular every year because of its ability to connect travelers to local communities by offering a more immersive, authentic, and affordable travel experience for business and leisure travelers. It’s also a portal for self-discovery because it offers access into so many varied neighborhoods around the globe.

Airbnb is about experiencing the destination on your own terms. It’s about freedom, personalization, choice, and self-determination, but it also requires a degree of flexibility and independence on the part of the individual traveler. That very lack of structure is what causes concerns among many females traveling alone to business meetings and conferences. Their questions are many, including: Who else has keys to the listing? Airbnb has safeguards in place, of course. Beginning with Tracy Stuckrath, president of Atlanta-based Thrive! The Local Neighborhood Experience. The 9 Largest Hotel Loyalty Programs – Skift. As major hotel chains make a big push this year to increase the size of their loyalty programs through book-direct campaigns, they might take satisfaction in the fact that their programs grew at a healthy pace in 2015 but that presents a potential challenge — a large chunk of their rosters are inactive. 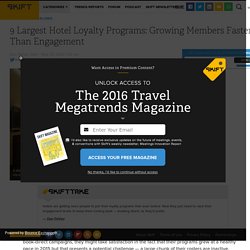 Major chains saw their numbers of loyalty program members in 2015 increase an estimated 13.1 percent to more than 344 million members compared with 2014. [See note below on how we calculated those numbers]. But it’s likely that more than half of these memberships are inactive or lapsed, which generally means that a member hasn’t redeemed points or miles within the past year to 18 months. For example, 25.5 percent, or 2.8 million, of La Quinta Returns’ 11 million members were considered active as of the end of 2015, a Securities and Exchange Commission filing states. 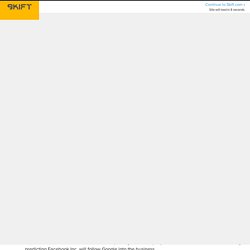 Facebook is already working on e-commerce, letting users save their payment information on the social media giant’s site and purchase products they see advertised there directly through “buy” buttons. Hotels Should Better Use TripAdvisor to Their Advantage – Skift. In its latest report, “Luxury Hotels: Regional Search Strategies,” New York-based brand consultancy L2 suggests upper upscale and luxury hotel brands should be looking to TripAdvisor more often than they are now. 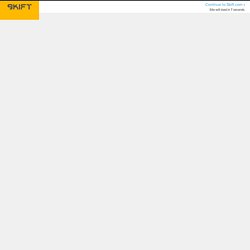 As hotel brands are forced to compete in an increasingly crowded online marketplace with both online travel agencies (OTAs), as well as Google Hotel Ads, it’s becoming more and more difficult for hotels to make it to the first page of Google search results for hotels in a specific city. L2, which compiles an annual “Digital IQ Index” of 55 luxury hotel brands, found the following: Airbnb Joins World Tourism Organization – Skift. On May 11, Airbnb became one of 26 new affiliate members of the World Tourism Organization (UNWTO), an agency of the United Nations that promotes responsibility, sustainability, and universal accessibility in tourism. 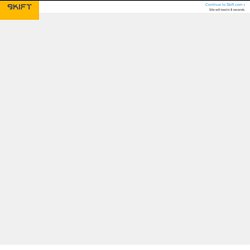 To date, the UNWTO has 157 member states and more than 480 affiliate members, Airbnb included. Affiliate members include private companies, universities, tourism association, and local tourism authorities from around the world. U.S. members include the American Hotel & Lodging Educational Institute, Destination Marketing International, Green Globe, and TripAdvisor, to name a few. For Airbnb, the membership is symbolic of the platform’s importance as “a sustainable form of tourism” and it also enhances its global reputation as a major player in the $1.4 billion travel and tourism sector, which continues to grow. The first real time Intelligent Advisor for hospitality managers - Travel Appeal. 3 Ways of Rethinking the Premium Airport Lounge – Skift. The airline lounge is a evolving beast. 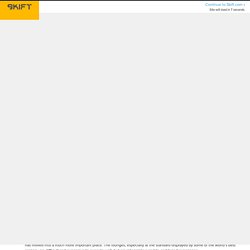 What was once a easy, membership-based place for business travelers to knock back a whiskey and make a few pre-flight calls has moved into a much more important place. The lounges, especially at the standard displayed by some of the world’s best carriers, are difficult and expensive to execute well, but are integral to a end-to-end brand experience. Ment, YouTourism and More in Today's Travel Startup Watch – Skift. It’s not always easy to keep track of new travel startups. 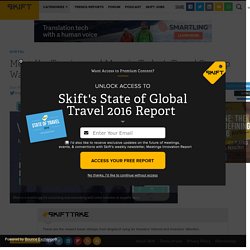 Three days a week we alert readers to new startups in the travel industry that have set up profiles on AngelList, the platform for early startup investing. These startups may have just launched a product or the may merely be an idea in the head of an entrepreneur, but they are worth looking at to better understand where the activity is in the travel sector. Special interest trips, guided tours and activities by local suppliers worldwide. Ment is an airport social app to connect you to likeminded travelers at your gate/terminal. It allows young travelers to engage with others around them in real-time. Daytourz is the first and only online booking engine for day tour in every destination. Bolloré aménage des stations Autolib’ en points relais. Dimanche, une internaute parisienne a étrenné sa dernière acquisition : une machine à eau gazeuse achetée sur Cdiscount. 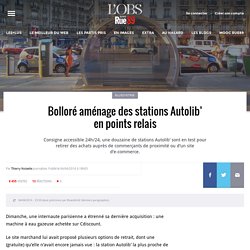 Google preps a new travel app to launch in beta next week. Les comptes Snapchat de voyageurs du monde entier à suivre. Google Is Planning on Launching a Travel Assistant App – Skift. Is it telling that Google will be rolling out a beta of “a new travel assistant app” this week and that it will be certain members of its Local Guides program who will be among the first to get a “sneak peak?” 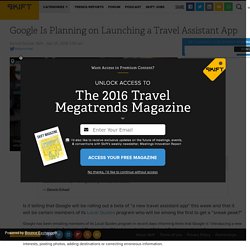 Google has been emailing members of its Local Guides program in recent days informing them that Google is “introducing a new travel assistant app for Android and iPhone, and we’ll be giving select Level 2+ Local Guides a sneak peak.” Members of Google Local Guides, which debuted in early 2015, contribute to Google Maps by writing reviews of points of interests, posting photos, adding destinations or correcting erroneous information. Local Guides members at various status levels earn rewards ranging from access to Google-hosted events and hangouts at Level 1 to becoming a “Google insider” with access to products before they’re released and the ability to apply to attend a Google Local Guides Summit at Level 5. Forum Expat - Le guide de l'expatriation et de la mobilité internationale. 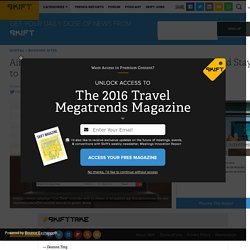 It made the announcement in San Francisco at a live press conference. The company says the tagline was “designed in response to the growing dissatisfaction and disappointment with standardized tourist offerings that have become the hallmark of modern tourism.” Previous taglines used by Airbnb include “Welcome Home” and “Belong Anywhere.” The global campaign, launched today, includes 15, 30, and 60 second television spots, as well as digital, out-of-home, and print creative. How Machine Learning is Making Hoteliers Smarter. How Booking.com Profits Handsomely From Bidding on Hotel Names. Few things can be more frustrating for a hotel brand, including independent properties, than when they see a major online travel agency such as Booking.com or Expedia outbid them in Google AdWords on the hotels’ own trademarked brand names.

But it is a huge business for the online travel agencies — and could entail a substantial hit for the hotel brands in lost business or higher distribution costs, according to a blog post by Spain-based Mirai, which focuses on enabling hotels to boost their direct bookings. In fact, Mirai estimates that 15 percent of Booking.com’s sales come from bookings gained by using hotel brands’ trademarked names in Google AdWords.

It wasn’t until 10 years after starting the laundry service, in January 2015, that Zabludovsky repositioned Slate as a tech company. Les bagageries automatiques pour touristes prolifèrent à Paris. Les hôtels interdits aux enfants ont du succès en Allemagne. Hilton Deepens Its Uber Relationship in New Loyalty Push. Hilton may not have been the first hospitality company to partner with Uber — that distinct honor goes to Starwood — but it is the first hotel company that’s allowing its loyalty members to view their hotel stay information and be able to check-in from the Uber app, all while they travel to their hotel in the very Uber they were reminded to book from their Hilton HHonors app.

Now, when a Hilton HHonors guest’s stay is approaching, the Uber app will pre-set his or her Hilton hotel as the recommended destination and once they get into their Uber ride, they can tap a “View Stay Details” option in the Uber app that takes them to the Hilton HHonors app. From there, they can check in, choose their room, and request a Digital Key while they make their way to the property. This new feature is an expansion of Hilton’s partnership with the San Francisco-based ridesharing platform that was originally announced in September 2015. Hilton’s Loyalty Push.

Une nuit Airbnb au milieu des requins. Booking.com Sees Loyalty Programs as a Burden, Not an Opportunity. Loyalty programs among online travel agencies seemed to be a trend with the launch of Orbitz Rewards in 2013 and then Expedia revamped its program a year later but hotel-site Booking.com wants no part of them. Priceline Group CFO Daniel Finnegan, speaking at a Bank of America Merrill Lynch retail tech conference in mid-March, said there is a downside to loyalty programs and its Booking.com unit would rather create a great user experience for site visitors and app users instead of paying them to be loyal.

“I feel our performance has been strong without being beholden to loyalty programs,” Finnegan said. Noting that many hotels have loyalty program and rival Expedia does too, Finnegan said it can be costly to compensate customers through loyalty programs when perhaps they were going to become repeat customers and be loyal anyway. You have to pay these customers even when they were going to book direct anyway, he said. TripAdvisor and Industry Groups Are Optimistic About Europe, Despite Travel Alert. What are the prospects for vacation travel to Europe this summer? Although some Americans are cancelling their travel plans to Europe in the wake of the terrorist attacks and a U.S.

State Department travel alert, TripAdvisor officials believe travelers will be resilient and return to impacted destinations while the American Society of Travel Agents thinks — or hopes — that many travelers will maintain their Summer itineraries for Europe. The Airport Security Measure That Works, Yet too few Airports Use. The departure hall bombing at Brussels airport has triggered debate over whether to move the security cordon at Europe’s airports to the terminal doors and beyond. Most travelers, I suspect, will have the same gut response: What, more lines? That’s also the reaction of some aviation security experts, who believe that in the 15 years since 9/11, we have lost the balance between security, cost and convenience — often, they suspect, to little effect.

“I would really hope we do not introduce additional screening points in response to this,” said Philip Baum, editor of Aviation Security International Magazine and author of a book published this month, on the history of aviation hijacks and bombings. Not only are there more effective ways to provide security, says Baum, but “it’s taking away the pleasure of flight and travel.” Security, it seems, has been an issue for as long as there have been commercial flights. How Translation Technology is Shaping the Future of the Global Traveler Experience.

De nouvelles chambres cachées dans la tombe de Toutânkhamon ? La Vallée des Rois, en Égypte, est encore loin, très loin d'avoir révélé tous ses secrets. Brussels Airport Attack Is Rare Breach in Aviation Security. The terrorist attack on Brussels airport was only the third against an aviation hub in the past decade to claim a death toll in double figures following the worldwide security clampdown in the wake of the Sept. 11, 2001, attacks on the U.S. Tuesday’s attack on the Belgian capital’s Zaventem hub, which killed at least 11 people, is the bloodiest at an airport since 2014, when the Pakistani Taliban raided an aircraft maintenance facility next to Karachi’s Jinnah International terminal, resulting in the deaths of 26 workers and 10 militants. Airbnb Will Start Selling Travel Experiences Later This Year – Skift. Uber to Start Providing Cross-Border Trips From U.S. to Mexico. Americans who want to cross the Mexican border, perhaps to enjoy Tijuana’s bars, bullfighting, or street art, will be able to do so in an Uber for the first time.