Your Next Trip, Courtesy of Google Search. Photo wants to make it easy for travelers to decide where and when to go on vacation, and to see at a glance what a trip is likely to cost, right from their mobile phones. 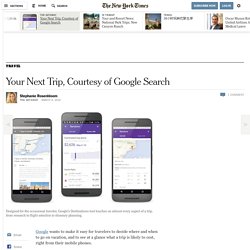 The company on Wednesday announced a search feature, Destinations on Google, that touches on almost every aspect of a vacation, from research to flight selection, hotel booking and itinerary planning. Destinations does not offer off-the-beaten-path guides or exclusive information that can’t be found elsewhere on the web. Rather, it’s meant to make researching and planning a trip on a mobile phone (typically a clumsy experience) more intuitive and productive for the occasional traveler by delivering good-quality basic information. This is the first time Google has introduced a travel tool on mobile (where people are increasingly spending their time) before desktop; it’s available through your mobile browser or the Google app on iOS and Android. 11 Android Apps You Need for Traveling the World. “Twenty years from now you will be more disappointed by the things you didn’t do than by the ones you did do. 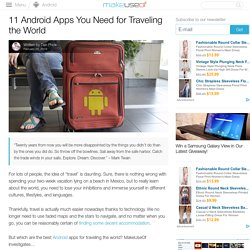 So throw off the bowlines. Sail away from the safe harbor. Catch the trade winds in your sails. Explore. Dream. For lots of people, the idea of “travel” is daunting. Thankfully, travel is actually much easier nowadays thanks to technology. No Cookies. Search Bus & Train Tickets to 2,000+ cities - Wanderu. 1715015133#_ga=1.221630232.1268082208. If you’re looking to save money of plan a trip but want the flexibility to check lots of flights, dates, and destinations, you have tons of options. 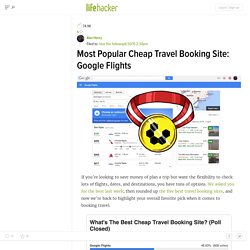 We asked you for the best last week, then rounded up the five best travel booking sites, and now we’re back to highlight your overall favorite pick when it comes to booking travel. The top spot goes to Google Flights by a pretty wide margin: close to 47% of the votes cast. Perhaps because it’s a Google product, maybe because it’s semi minimalist and easy to use, and maybe because it also ties neatly in with other Google services like Google Now, you praised it for its great interface, its flight search engine, and speedy results.

Second place went to Skyscanner, with over 21% of the votes cast. Lifehacker. GoEuro App. The Good Life France - Everything you ever wanted to know about france and more. 101 things to do in Paris for tourists – culture, restaurants, shopping, nights out and more. Insider's Guide to the 11th Arrondissement in Paris. [Editor’s Note: After the November 13th terrorist attacks, we would like to celebrate the arrondissement where so much tragedy took place.] 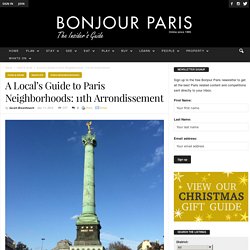 The 11th arrondissement has long been known as a lively melting pot where happy locals and tourists alike sip wine and share great food with friends. The 10 best budget hotels in Paris for 2015. Park yourself at one of Paris' top affordable hotels, such as the Hotel du Champ de Mars, above. 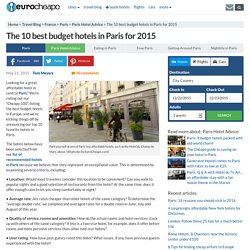 (All photos by EuroCheapo.com) Looking for a great, affordable hotel in central Paris? We’re rolling out our “Cheapo 100”, listing the best budget hotels in Europe, and we’re kicking things off by announcing our top 10 favorite hotels in Paris. The hotels below have been selected from our list of recommended hotels in Paris because we believe that they represent an exceptional value.

This is determined by examining several criteria, including: • Location: Would most travelers consider this location to be convenient? • Average rate: Are rates cheaper than other hotels of the same category? • Quality of service, rooms and amenities: How do the actual rooms and hotel services stack up with others of the same category?

Best Artisanal Pastry Shops in Paris - Secrets of Paris - Tours and Travel Planning. "artisanal (adjective): Food made fresh daily, by hand, in small batches that requires skills from a maker/master with a combination of science and art derived from experience" (from Artisanal Defined) There are many "Top Ten" style lists of Paris pastry shops, but there are also several hundred to choose from (there are over 350 selected by author and pastry chef David Lebovitz in the Paris Pastry Guide). 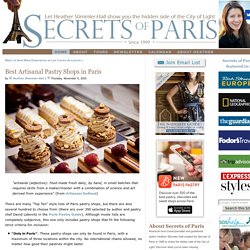 Although mosts lists are completely subjective, this one only includes pastry shops that fit the following strict criteria for inclusion: Paris woos commuters with new transport apps. Paris transport chiefs are rolling out extensive upgrades to their traveller apps, including real time updates, new games, and an English-language audio tourguide for bus journeys. 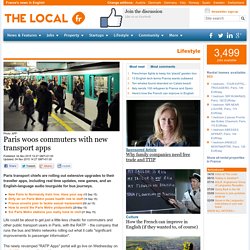 Life could be about to get just a little less chaotic for commuters and other public transport users in Paris, with the RATP - the company that runs the bus and Metro networks rolling out what it calls "significant improvements to passenger information". The newly revamped "RATP Apps" portal will go live on Wednesday on the RATP website, offering 12 new apps from everything to entertainment to travel. On top of this, there will be a separate new app offering real time information for the RER A, the capital's busiest line that runs from east to west and passes through the financial district of La Défense. Ten essential free phone apps for a visit to Paris. Paris might be a city rich in history but any visitor these days would be wise to make use of modern technology to get the most out of their trip to the City of Light. 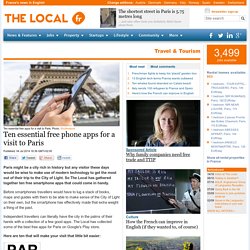 So The Local has gathered together ten free smartphone apps that could come in handy.