“I want to go to there” « KRISATOMIC 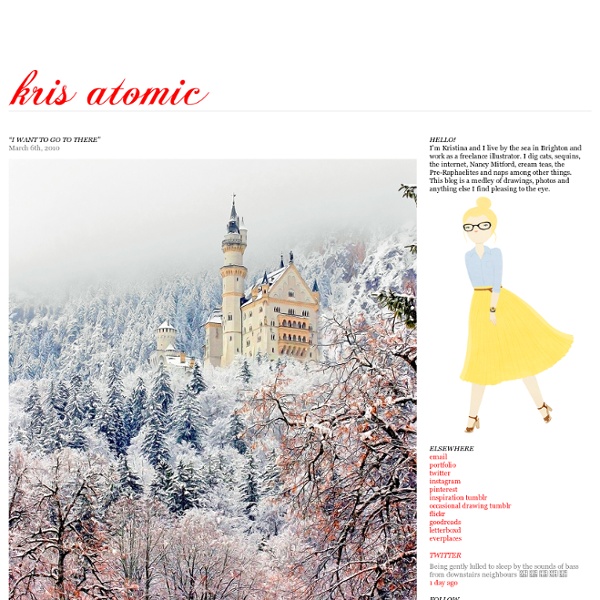 Neuschwanstein Castle in Bavaria, Germany by Luiz Pires There are so many places I want to see, I’ve been browsing and bookmarking and basically putting together travel porn (oh dear, that phrase isn’t going to be good for my blog search results is it). I’m going to Nice in may and maybe Davos in the summer, so that should satisfy me for the year. If I had unlimited funds I’d do a leisurely Trans Siberian Railway route through Russia and then travel around China and Japan. Where would you go? St. Hanoi, Vietnam by Larpoon. Iceland by orvaratli. Prague, Czech Republic by Adam Gut. Crystal River Mill, Colorado, USA by Rob Lee. North Coyote Buttes near the Utah and Arizona border, USA by coulombic. Varanasi, India by Larpoon. Dalat, Vietnam by Larpoon. Oia in Santorini, Greece by marcelgermain. Brennisteinsalda volcano in Iceland by ystenes. Honningsvåg, Norway by richard mcmanus. Fribourg, Switzerland by Adam Gut. Erg Chebbi sand dunes, Morocco by mikemellinger.

Kayaking the Thumb Kayaking the Thumb Kayaking the Thumb, Port Austin, Michigan: Photos & Trip Report (2009) And thanks to Nila Repard here is a photo from the very same island, taken by her great grandmother in 1934. And here is another photo, taken in the winter. 10th of April 2010 Probably Related Millions of historic photos Cry What is the drunkest photo ever taken of you? Eyjafjallajökull Travel Status Back home since 55 days Currently in: Switzerland Oh dear, do you realise how old your browser is? Shore Beauty: The World's 10 Most Amazing Beaches Beaches mark the borders between sea and land, and as such have unique characteristics derived from both geological parents (no wonder everyone wants a beach home). These 10 amazing beaches showcase the best, the brightest and the most sublime sandy shores ever to rock your world! Red Beach, Kaihalulu, Hawaii (images via: Patrick Smith and Xigre) The Red Sand Beach of Kaihalulu can be found on the Hawaiian island of Maui, south of Hana Bay on the far side of Ka’uiki Hill. (image via: About.com/Hawaii) From high overhead, the Kaihalulu Red Sand Beach takes on a rusty hue reflecting the high iron oxide (rust) content in the sand eroding from an inland cinder cone. Shell Beach, St. (images via: TrekEarth, Completely Coastal and Amoeba Sailing Tours) Every beachcomber enjoys searching for exquisite, exotic seashells while walking along the shore, and one won’t have to walk far if they happen to be at Shell Beach, near Gustavia on the Caribbean island of St. (image via: Byron Jorjorian) St.

John Miranda's Photography Greece Greece A few favorite pictures of Greece taken during a trip in May 2009. Acropolis in early evening, Athens. Oia, Santorini. Afternoon in Oia. Early morning in Oia, Santorini. Enjoying the view, Santorini. Candle lit dinner, Santorini Colorful entry way, Santorini One of many street dogs, living life on the edge, Santorini. Greek dog, no doubt guarding the house. A medieval village blends into the mountainside, in a quieter Greek island near Turkey. An empty beach to enjoy the clear Aegean Sea. Road side monument above the Aegean. One of my favorite restaurants during my visit, high above the ocean, located in a very secluded village. ...and the food... The harsh noon light reflects the sun drenched ancient villages of Greece. Temple of Poseidon built around 440 BC, in Cape Sounio. Temple of Poseidon. Detail - Temple of Zeus, began 6th Century BC and completed 2nd Century AD. Room vith a view, Santorini. Morning sail, Santorini. © 2011 John Miranda

Still Looking For Paradise? Maldives - justpaste.it Double chain of twenty-six atolls… The Republic of Maldives, or simply the Maldives, is an island nation in the Indian Ocean. It consists of approximately 1,190 coral islands grouped in a double chain of 26 atolls, along the north-south direction, spread over roughly 90,000 square kilometers, making this one of the most disparate countries in the world. The atolls are composed of live coral reefs and sand bars, situated atop a submarine ridge 960 kilometers long that rises abruptly from the depths of the Indian Ocean and runs from north to south. Crystal clear waters, beautiful white sand beaches, swaying palm trees and fabulous dive sites – that’s why the Maldives, is known for being one of the best tropical holiday destinations in the world. ...and no need to climb ;) With an average ground level of 1.5 metres (4 ft 11 in) above sea level, it is the lowest country on the planet. Summer never ends ... Crystal clear waters and azure blue lagoons... Resorts in the Maldives

Belize a Secret of Nature | Travel Guides, Luxury Travel and Tra Between the natural attractions of Mexico and Guatemala on the Caribbean coast of Central America you will find a place which is a gift of Mother Nature Beliza. This is a perfect tourist destination which promises both relaxation and richly rewarding authenticity. Beliza is among the very few places in the world which has not been spoiled and has drawn travelers all over the globe. Beliza is a wonderful place with waterfalls, rivers and lagoons caressing the entire country, and make people all over the world refer Belize as the blue beauty of the world. Beliza is the home to the Great Blue Hole, the longest barrier reef in the hemisphere, hundreds of beautiful islands, snorkel and exotic locations. There are many other things which might interest you in Beliza. Islay Marina & Island – The marine environment of Beliza pulls enthusiasts from all over the earth to visit the coral gardens, scuba diving in the Blue Hole and enjoy the warm sun, sand and the Caribbean Sea. How to reach Beliza?

Mopeds in Mykonos | Travel for Love I have a friend getting married soon who’s honeymooning on the Greek Islands. Her planning is reminding me of the only time I’ve been to Greece, on a Mediterranean cruise with my mom, and one particularly fun day we spent on Mykonos. Mom and I learned quickly that we did not want to be anywhere near the cruise ship tours where you get herded around town with 20 other people following a guide all day. First we rode to the main area of Mykonos Town and visited the windmills and Little Venice. It was a beautiful day and as we started getting out of town it was a blast to feel the wind in our faces as we scooted over the hills of the island. The Mykonos countryside was just gorgeous. Eventually we stopped at one of the beaches and lounged in the sun for a couple hours, enjoying the peace of having the place all to ourselves. Riding a scooter is the perfect way to explore Mykonos.

Our Mad World | Around the World Amazing Underwater River : Cenote Angelita in Mexico Underwater River in Mexico If you are a professional diver you should visit Cenote Angelita Mexico. These amazing pictures were taken by Anatoly Beloshchin in the cave Cenote Angelita, Mexico. Here’s his description: “We are 30 meters deep, fresh water, then 60 meters deep – salty water and under me I see a river, island and fallen leaves… Actually, the river, which you can see, is a layer of hydrogen sulphide.” How Cruise Lines Fill All Those Unsold Cruise Cabins Last Updated: 4/06/2014 21:24 PST A luxury cruise is one of life’s pure joys. Today’s modern cruise liners are engineering marvels; floating 5-star hotels that offer the best service, accommodation, cuisine, and activities. They visit exotic locales, with non-stop relaxation or stimulation, depending on your pleasure. Over the past few years, cruise companies have spared no expense and literally invested billions in jaw-dropping super ships. Even if you’ve cruised before, you probably have not experienced anything like these new marvels. But, the best news is that due to the slowdown in travel caused by the recession and significant overcapacity in the industry, savvy travelers can now book once-in-a-lifetime cruises at insanely low prices. How does 80 percent off the brochure price sound? Founded more than 25 years ago, Vacations To Go realized that taking a cruise vacation was a new experience for many. But, what about the discounts?