The 6 Best Flight Apps to Find the Cheapest Flight Deals. Once in a while, I plug myself back into the matrix. 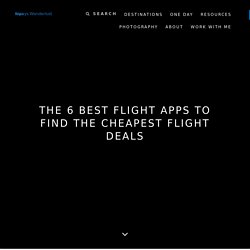 Inside, I can find flight deals where it’s practically free and all my flights are always upgraded to First-class at no extra charge. Alas, I got tricked into taking the blue pill and there the story ends. Google put the ax on my once favorite OnTheFLy Matrix app. It ran on the Google ITA Matrix flight engine which I’ve used to great success. Now with the coolest app out of the market, it’s ripe for another one to take its place. Throughout the year I’ve used and tested a few replacements. There’s a myriad of apps out there promising to make your wildest travel dreams come true. I’ve already gone through the pains and disappointments. So let’s get started! Skyscanner App The Skyscanner app is now my defacto flight booking app. When you start the app, it automatically shows you the option to pick a flight from where you are and to wherever you want to go. That’s not the only positives. Travel Tuesday: Cheap Flights to Gothenburg Sweden. Cheap Flights from Los Angeles to Gothenburg Cheap flights from LAX to Gothenburg for only $375 round trip! 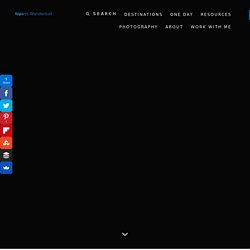 The prices fluctuate like crazy so it’s better if you secure the deal now than later. I just looked at this deal minutes ago and it was at $329. If you’re not traveling right now are very flexible (recommended), you can find the best deals through this link at SKYSCANNER. Read why I recommend Gothenburg: Why You Should Visit Gothenburg Sweden.

6 Very Useful Tips For Adventure Travel Photography. I shoot mostly scenic and adventure travel subjects and that means I’m at the mercy of what light nature gives me. 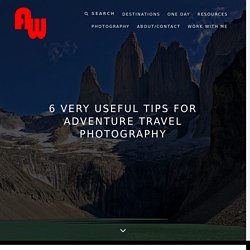 Often times the contrast is too much for film or digital sensors to handle hence my use of Graduated ND filters. HDR is also a solution if you’re shooting digital; however, I have an extensive background in traditional film so I’m still using filters to solve lighting problems. Landscape photography is one of the most challenging forms of photography. Why? Because there are too many elements outside of your control. You can’t for example, tell the Sun to move east and below the horizon, move a mountain close to the raging river just under a lenticular cloud, change the weather, or drag the moon below the shadow of the Earth to form a lunar eclipse. 1. 7 Most Unique Hostels In The World That Will Blow Your Mind. Most Unique Hostels In The World When you think of a hostel you might envision a dumpy old hole in the ground with dirty water and slow wifi. 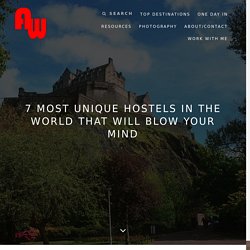 If you’ve been to some of the cheaper hostels you know what I’m talking about. While this is a reality for a lot of hostels, there are some pretty decent, might I even say, impressive hostels out there. Now, you might assume; “the better the hostel the less money in my pocket.” While I can not say this statement is completely false, it certainly isn’t 100% true either.

Asia, Europe, Africa, The Americas, The Middle East. So without any more delay let’s take a look at some cool hostiles on planet Earth! 1 – Castle Rock Hostel – Edinburgh If you’ve been to Edinburgh you’re probably familiar with the Edinburgh Castle. Edinburgh, Scotland Art fills the room along with laughter and cheer. 2 – ClinkNOORD – Amsterdam ClinkNOORD has a relatively more modern taste than Caste Rock. 3 – Athens Backpackers – Greece 4 – Ostello Bello – Milan Milan, Piazza Duomo. Save A Lot Of Money To Travel By Going Cold Turkey. There’s a lot of books and articles out there on how to save money for travel. 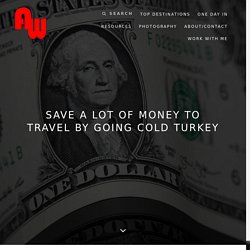 All of them require you to plan, be detail oriented, and budget like an expert accountant. They banter on about steps and exercises to cut your expenditures to reach some milestones of saving money you’ll be happy with. Well, I could never follow the points these articles detail out because they require you to keep a detailed account of every expenditure. You just spent $5 on a latte? Got to enter that on the spreadsheet. Why You Should Not Start A Travel Blog To Fund Your Travels. Back in college, I had a roommate, Andy, who I shared a studio with. 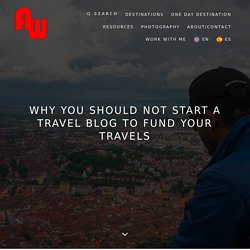 We were poor students and idealistic. Andy, in particular, was a driven individual. He had lofty dreams and aspirations. Andy wanted to become a Hollywood superstar. He would join the thousands flocking to Hollywood in the California movie industry gold rush. OK, what’s dreaming about becoming a Hollywood star and gold rush got to do with travel blogs? Want to Save a LOT of Money for Travel? Go Cold Turkey. 20 Mistakes That Will Cost You In Your Trip to Europe. How to Book Google ITA Matrix Flights. 15 Android Travel Apps You Will Actually Use In 2016. Torres Del Paine Circuit: The Botched “Q” Trek (“W” Trek) 15 Android Travel Apps You Will Actually Use In 2016.