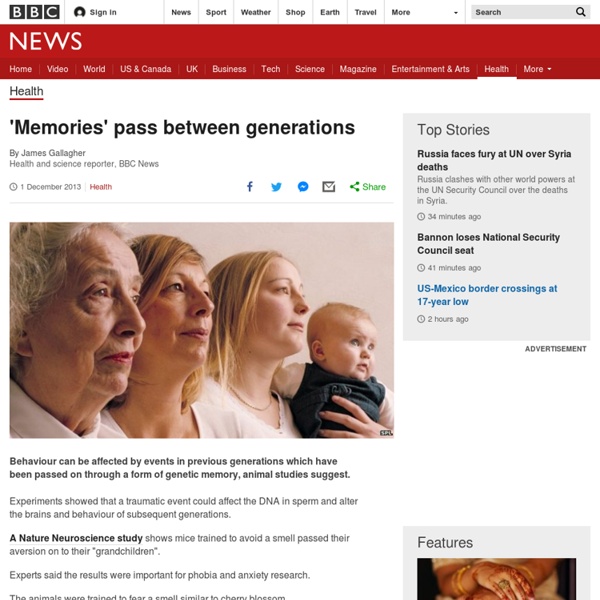 Behaviour can be affected by events in previous generations which have been passed on through a form of genetic memory, animal studies suggest. Experiments showed that a traumatic event could affect the DNA in sperm and alter the brains and behaviour of subsequent generations. A Nature Neuroscience study shows mice trained to avoid a smell passed their aversion on to their "grandchildren". Experts said the results were important for phobia and anxiety research. The animals were trained to fear a smell similar to cherry blossom. The team at the Emory University School of Medicine, in the US, then looked at what was happening inside the sperm. They showed a section of DNA responsible for sensitivity to the cherry blossom scent was made more active in the mice's sperm. Both the mice's offspring, and their offspring, were "extremely sensitive" to cherry blossom and would avoid the scent, despite never having experienced it in their lives. Changes in brain structure were also found.

Gut feelings: the future of psychiatry may be inside your stomach Her parents were running out of hope. Their teenage daughter, Mary, had been diagnosed with a severe case of obsessive–compulsive disorder (OCD), as well as ADHD. They had dragged her to clinics around the country in an effort to thwart the scary, intrusive thoughts and the repetitive behaviors that Mary felt compelled to perform. Even a litany of psychotropic medications didn’t make much difference. Sperm carries information about dad's weight Turns out dads are also eating for two. A study published December 3 in Cell Metabolism reveals that a man's weight affects the heritable information contained in sperm. The sperm cells of lean and obese men possess different epigenetic marks, notable at gene regions associated with the control of appetite. The comparisons, which included 13 lean men and 10 obese men, offer one biological explanation for why children of obese fathers are themselves more predisposed to obesity.

Health - Why feeling more pain may be better for you Psychology studies show painful experiences aren’t dictated by how long they go on for, and this could teach us an important lesson about everything from hospital operations to holidays, says Tom Stafford. When is the best treatment for pain more pain? When you're taking part in an experiment published by a Nobel prize winner and one of the leading lights in behavioural psychology, that is. The psychologist in question is Daniel Kahneman; the experiment described by the self-explanatory title of: When More Pain Is Preferred to Less: Adding a Better End.

MSG and gluten intolerance: Is the nocebo effect to blame? Photo by Marina Helli/AFP/Getty Images While living in China from 2003 to 2005, I often served as the designated translator for fellow expatriates. Whenever we ate out, this involved asking our server which menu items contained MSG. Curious study calculates the “average” female face for each country Like us on FB: In a recent study, researchers from the Scottish University blended and aligned thousands of photos of women from 40 different countries to calculate the “average” face for each nation. The resulted images are surprisingly beautiful, as aligning and blending numerous images the most part of imperfections is inevitably removed. Truth be told the study used pictures of young women, that’s why the final images portray some well-above-the-average beauties. The interesting thing about this study is that looking through the different photos you can really distinguish all the physiognomic peculiarities that make each population different from the other.

Scientists have found that memories may be passed down through generations in... New research from Emory University School of Medicine, in Atlanta, has shown that it is possible for some information to be inherited biologically through chemical changes that occur in DNA. During the tests they learned that that mice can pass on learned information about traumatic or stressful experiences – in this case a fear of the smell of cherry blossom – to subsequent generations. According to the Telegraph, Dr Brian Dias, from the department of psychiatry at Emory University, said: ”From a translational perspective, our results allow us to appreciate how the experiences of a parent, before even conceiving offspring, markedly influence both structure and function in the nervous system of subsequent generations. “Such a phenomenon may contribute to the etiology and potential intergenerational transmission of risk for neuropsychiatric disorders such as phobias, anxiety and post-traumatic stress disorder.” Research link- Source: UTAOT.

My 'Naked' Truth  Naked, I stood at the closet doors with the lights on and made myself ready. I took a deep breath and positioned the mirrors so I could see all of me. I consciously worked to remove my self-believed inner image. I opened my eyes and looked very carefully at my body. And my heart lurched at the truth: I am not a young woman anymore. I am a woman well-lived.