Rococo Romance: Elegant Designs from a Throwback Trend. We predicted that references from the Rococo period would be making waves in design in 2019, a trend we’re coining as Rococo Romance. 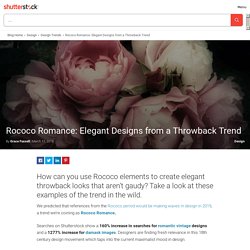 Searches on Shutterstock show a 160% increase in searches for romantic vintage designs and a 1277% increase for damask images. Designers are finding fresh relevance in this 18th century design movement which taps into the current maximalist mood in design. But how can designers use Rococo elements without straying into stuffy or saccharine territory? Here, we look at ways you can mesh Rococo with contemporary elements to create a compelling, quirky style. This fresh take on a classic look works beautifully for advertising, social media, or poster imagery.

Tiago Sousa inserts brick house into stone ruin in Portugal. Portuguese architect Tiago Sousa has renovated the remains of a traditional house in the village of Romarigães by inserting a brick volume into an existing stone shell. 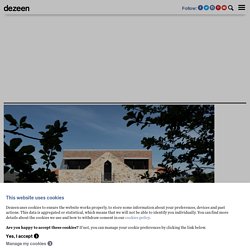 Called Box, the new two-bedroom house in Portugal does not extend beyond the footprint of the original building. Instead, openings, terraces and balconies slot into the old stone walls. "The existing volume has a singular configuration, rigid in shape and rudely built," explained Tiago Sousa. A new red-brick volume slots into this contrasting stone envelope, with a new addition that peeks above the original roofline. 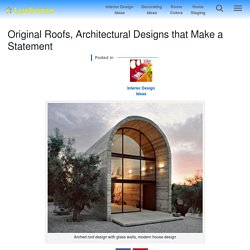 A roof is a functional architectural element that adds personality to a house exterior design and affects the style of home interiors. Modern roofs keep homes warm and dry while enhancing the style of the building. Ingenious Home Design Solutions. Architect Spends 45 Years Turning An Old Cement Factory Into A Fairytale Home. La Fábrica originated out of a vision Ricardo Bofill had for an old 1970s cement factory. 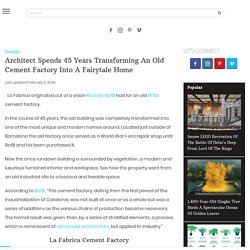 In the course of 45 years, the old building was completely transformed into one of the most unique and modern homes around. Located just outside of Barcelona the old factory once served as a World War I-era repair shop until Bofill and his team purchased it.

Guangzhou circle building in China : China. Facebook Watch. 10 FUTURISTIC HOMES - TRANSFORMING HOUSES AND DESIGN. 12 AMAZING APARTMENTS WITH INGENIOUS ARCHITECTURE. Home by Hiroshi Nakamura looks like a cluster of timber tepees. Visions Not Previously Seen: The Groundbreaking Design Work of Barbara Stauffacher Solomon. This Is How Architecture Can Curb Climate Change. If architecture helps shape our world, then perhaps it can also help save it. 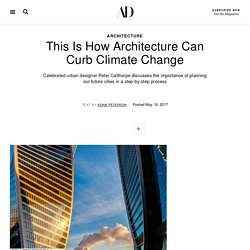 Climate change is among the most daunting problems we face today, and with more and more of the world’s population moving into cities, now is the time to both rethink how we use our resources and make certain our urban future can be clean, smart, and green. Celebrated urban designer Peter Calthorpe is already focusing on this task, and in his recent TED 2017 talk on the subject, he identified an urgent trend that requires immediate attention: urban sprawl—the random, unplanned, and inefficient use of space and resources.

Calthorpe notes that as the importance of cities grows, so will the cities themselves, adding that new development is crucial. 17 Best Concrete Buildings Around the World Photos. 5 Great Modern Eco-Friendly Homes – Modern Home. 7 fantastiska jordnära hem, från Spanien till Wales. Christian Benimana: The next generation of African architects and designers. John Cary: How architecture can create dignity for all. Biomimicrycy. 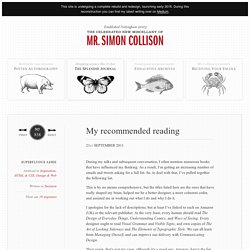 As a result, I’m getting an increasing number of emails and tweets asking for a full list. So, to deal with that, I’ve pulled together the following list. MoMoWo Catalog final. House for a Photographer by FORM/Kouichi Kimura Architects — urdesignmag. Japanese architecture office FORM/Kouichi Kimura Architects has recently conceived this house for a photographer in Shiga, Japan. 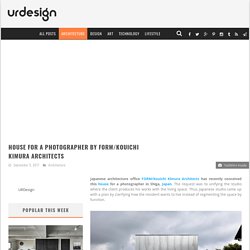 The request was to unifying the studio where the client produces his works with the living space. Thus, Japanese studio came up with a plan by clarifying how the resident wants to live instead of segmenting the space by function. Skýli Mountain Shelter by Utopia Arkitekter — urdesignmag. Projekty. Projekty. Lecture 10-21-10: Shading devices and techniques. In class today we learned about creating and manipulating shade through solar studies and various types and techniques of shading. 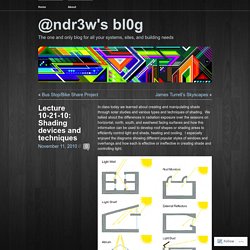 We talked about the differences in radiation exposure over the seasons on horizontal, north, south, and east/west facing surfaces and how this information can be used to develop roof shapes or shading areas to efficiently control light and shade, heating and cooling. I especially enjoyed the diagrams showing different popular styles of windows and overhangs and how each is effective or ineffective in creating shade and controlling light. In designing the bus stop/bike share hub project, these types of shading techniques directly apply. Wind and Water Bar by Vo Trong Nghia.

Vietnamese architects Vo Trong Nghia have constructed a thatched bamboo dome at the centre of a lake in Binh Duong Province (+ slideshow). 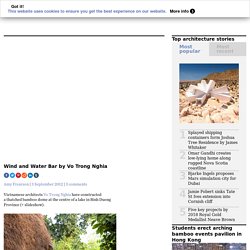 Above: photograph is by Phan Quang Stepping stones lead across the water and inside the Wind and Water Bar, which is used as a venue for music performances, local meetings and other events. The wooden structure of the building is assembled from lengths of bamboo, which are bound together and bent into arches. A circular opening at the centre of the roof lets hot air escape. 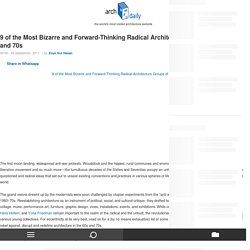 With injustices openly questioned and radical ideas that set out to unseat existing conventions and practices in various spheres of life, things weren’t any different in the architectural world. The grand visions dreamt up by the modernists were soon challenged by utopian experiments from the “anti-architecture” or “radical design” groups of the 1960–70s. Reestablishing architecture as an instrument of political, social, and cultural critique, they drafted bold manifestoes and designs, experimented with collage, music, performance art, furniture, graphic design, zines, installations, events, and exhibitions.

Den nyliberala bänken ska hålla fattiga borta. I slutet av 2010 öppnade den underjordiska tågstationen Triangeln i centrala Malmö. Heatherwick reveals Zeitz MOCAA art galleries in Cape Town grain silo. Thomas Heatherwick has created South Africa's biggest art museum – by hollowing out the inside of a historic grain silo building. Described by the British designer as "the world's tubiest building", the Zeitz Museum of Contemporary Art Africa, or Zeitz MOCAA, is set to become the world's most important exhibition space for African art. It is located inside a grain silo built on Cape Town's waterfront in the 1920s, which was once the city's tallest building. Heatherwick's team have carved huge sections out of the building's tubular interior to create a complex network of 80 gallery spaces.

The Tent House in New Zeland's Rainforest by Chris Tate — urdesignmag. Auckland-based architect Chris Tate has designed The Tent House an unusual space for retreat in the New Zealand’s rainforest. Shortlisted for a prize in Berlin’s World Architecture Festival 2017, The Tent House was an experimental project designed to challenge the expectations of what a weekend house may be.

It is not tiny but it is compact and very liveable. When not in use it is rented out for short term accommodation and photo shoots. The house comprises of 70m2 of floor space including the mezzanine sleeping area, there is compromised floor space due to the compounding angles running to the point. There is one bedroom, one bathroom, a fully functioning kitchen with the rest of the space being open plan or some what of a gallery for the living. House for a Photographer by FORM/Kouichi Kimura Architects — urdesignmag. A Foam-Wrapped Sofa's Lesson in Problem Solving. Via la-mignonette.com We can only imagine the process of making this strangely-compelling foam-wrapped sofa…that there could have been no way to plan it completely, but rather, follow the steps to making it as they became clear. That made us think of British architect Richard MacCormac’s insight: Great Big Story - Robert Lang is a physicist who worked at... Architect Turns Old Cement Factory Into His Home, And The Interior Will Take Your Breath Away.

When Ricardo Bofill stumbled upon a dilapidated cement factory in 1973, he immediately saw a world of possibilities. La fábrica was born, and almost 45 years later, the structure has been completely transformed into a spectacular and unique home. Show Full Text The factory, located just outside of Barcelona, was a WWI-era pollution machine that had closed down, and came with many repairs to be done when Ricardo Bofill and his team purchased it. MasterClass - As close to Frank Gehry’s design studio as... Dezeen. Dezeen. XS architecture vs XL furniture by Worapong Manupipatpong.

TI Design - These futuristic beach homes were inspired by... OpenIDEO. Design Kit: The Human-Centered Design Toolkit. In April 2015, IDEO.org launched an exciting new evolution of the HCD Toolkit the Field Guide to Human-Centered Design. Palimpsest – Collective memory through Virtual Reality / @ialab. Created at the Bartlett School of Architecture / Interactive Architecture, Palimpsest uses 3D scanning and virtual reality to record urban spaces and the communities that live in them.

The project aims to question/test the implication if the past, present, and future city could exist in the same place, layering personal stories and local histories of the city at a 1:1 scale. In 1998, researchers discovered that mathematical proofs by Archimedes had been overwritten with biblical texts by monks in the 13th century. Documents such as this, with previous erasures still visible beneath the primary text, are known as palimpsests. One man turned nursing home design on its head when he created this stunning facility. World's Strange Buildings. Here is a series of strange and fantastic buildings and architectures … Walt Disney Concert Hall (Los Angeles, California, USA) Innovative Family Home Built Of Reclaimed Concrete Blocks.