40 Times Boston Home Inspectors Discovered Such Interesting Things, They Just Had To Take A Photo. The Bubble Palace: A Tour of Pierre Cardin's Futuristic Home, Palais Bulles. “Clinging to the rocky Estérel, this palace has become my own bit of paradise. 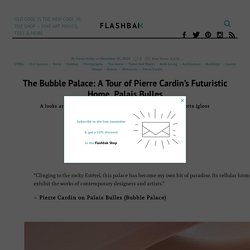 Its cellular forms have long reflected the outward manifestations of the image of my creations. It is a museum where I exhibit the works of contemporary designers and artists.”– Pierre Cardin on Palais Bulles (Bubble Palace) Italian-born fashion designer Pierre Cardin (2 July 1922 – 29 December 2020) created space-age designs in wool and poured women and men inside them. Broadcasting Architecture Worldwide. 50 Of The Worst Hotel And Airbnb Fails. The package includes a second round of PPP funding and other benefits that will help the hospitality industry. 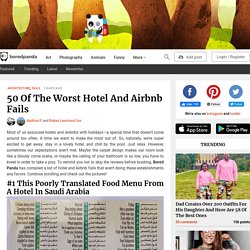 "The legislation contains many of the provisions AHLA has advocated for, including a second round of Paycheck Protection Program loans, increasing the size of PPP loans to 3.5 times payroll and making PPP loan expenses tax-deductible," Rogers explained. "This will provide a critical lifeline for hotels and other businesses that have been decimated by the pandemic. Other hotel industry priorities include a one-year extension for Troubled Debt Restructuring (TDR) relief so that banks can continue working with borrowers to gain additional forbearance and debt relief, business meal deductibility through 2022, and expanded Employee Retention Tax Credit.

" 50 Times Common Sense Went Over The Heads Of These Interior Designers (New Pics) Good design is about finding the delicate yet pleasing balance between form and function. 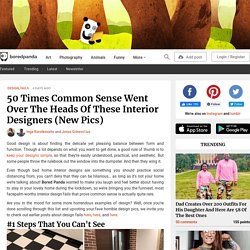 Though a lot depends on what you want to get done, a good rule of thumb is to keep your designs simple, so that they’re easily understood, practical, and aesthetic. Vøringsfossen, Norwegian Scenic Route Hardangervidda. Rescubika envisions 'babylon bridge' with waterfall over the seine in paris. Rescubika has revealed the ‘babylon bridge‘ suspended over the seine, in paris, france. the bridge design is part of a larger project that aims to study the possibility of a strong city entrance in the form of a hanging landscape, providing pleasing views to passersby, and drivers waiting in traffic on the saturated local ring road. all images courtesy of rescubika. 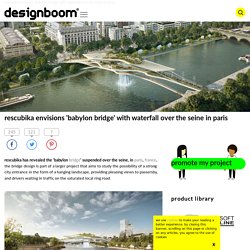 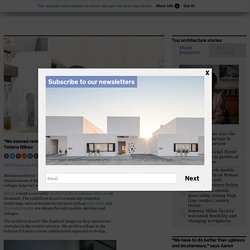 She says that making collages helps her to develop more exciting buildings. Bilbao's work is currently on show at the Louisiana Museum in Denmark. The exhibition doesn't contain any computer renderings; instead designs for projects such as Casa Ajijic and Vivienda Popular are shown through models, sketches and collages. The architect doesn't like finalised images as they can become obstacles in the creative process. Guy Finds The Worst Construction Fails And ‘Justifies’ Them With Hilarious Captions (30 Pics) Trevor Lahey, AKA Greaseball1987, is one Certified Caulk Installer with a wicked sense of humor. 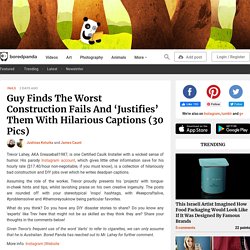 His parody Instagram account, which gives little other information save for his hourly rate ($17.40/hour non-negotiable, if you must know), is a collection of hilariously bad construction and DIY jobs over which he writes deadpan captions. Assuming the role of the worker, Trevor proudly presents his 'projects' with tongue-in-cheek hints and tips, whilst lavishing praise on his own creative ingenuity. 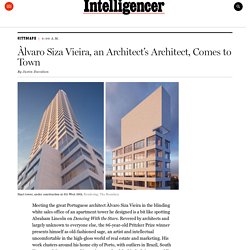 Rendering: The Boundary. 30 ‘Nightmares’ And ‘Miracles’ Spotted During Structural Inspections (New Pics) Alpha Structural, Inc. also had some advice for home-owners about making sure the buildings they own are safe and sound to live in. 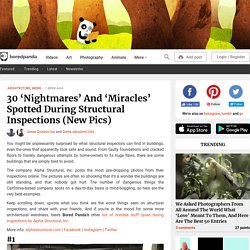 “Basic maintenance will keep your home strong for a long time to come. Top 20 winners of the A' design award and competition. Every year, the A’ design award and competition aims to showcase, share and inspire good design, creators and companies. it is an award dedicated to architects, designers and innovators who desire to gain worldwide recognition, publication for their projects, and a whole list of other prizes. however, only the very best work – whether conceptual or realized – is awarded the renowned prize. over its history 35,263 projects have been submitted to the competition with 10,051 winning awards. below, designboom highlights just 20 of our all-time favorite design and architecture-winning works. and, as a reminder, the winners of the 2020 award will be announced on april 15, 2020, on designboom! 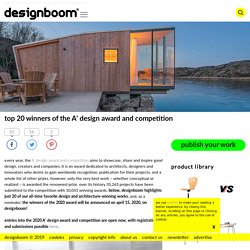 40 Epic Stair Design Fails That May Result In Some Serious Injuries. Lapee female urinal designed to reduce festival loo queues. Gina Périer and Alexander Egebjerg have designed an industrial-standard female toilet for festivals and outdoor events that allows people to pee sitting down quickly and safely. Named Lapee, the pink plastic structure has three urinals arranged in a spiral, with curving back rests that provide privacy while allowing the user to remain aware of their surroundings. Périer and Egebjerg designed Lapee to create more gender equality at outdoor events, where women are often left queuing for loos with doors while men can use urinals. Lapee is sturdy, easy to transport and easy to clean. WAF highlights best new architecture from around the globe. Parametric tool Finch can generate adaptive floor plans. Architecture studio Wallgren Arkitekter and Swedish construction company BOX Bygg have created a parametric design tool called Finch, which can generate floor plans adapted to the constraints of a site.

The tool is designed to help architects understand the constraints and potential of a site in the early stages of the design process. Finch will be launched in 2020 as a plug-in to visual programming tool Grasshopper within 3D computer graphics software Rhino. "The idea of Finch is to create a more user-friendly tool for architects to be able to enjoy the benefits of parametric design without any knowledge of Grasshopper or coding," Pamela Wallgren, co-founder of Wallgren Arkitekter told Dezeen.

The parametric design tool, which is currently under development, uses data inputted into it on the size of the building and local planning regulations to create an optimum internal plans either in two or three dimensions. Elmgreen & dragset insert 24-hour ATM onto concrete segment of the berlin wall. M.Y.O.M. Stacie Woolsey creates own design masters after being priced out. Priced out of further education, British design graduate Stacie Woolsey approached designers to help her create her own masters course. 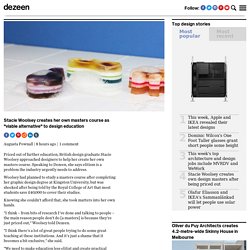 Speaking to Dezeen, she says elitism is a problem the industry urgently needs to address. Woolsey had planned to study a masters course after completing her graphic design degree at Kingston University, but was shocked after being told by the Royal College of Art that most students save £40,000 to cover their studies. De Allegri and Fogale create marble-lined mausoleum for a moment of solace. 上海华都建筑设计有限公司. Snøhetta designs terraced stone entrances for Norway's huge Stad Ship Tunnel.

The chosen era is marked by political and cultural freedom in the country, following Japanese colonial rule in the early 20th century that suppressed and discontinued the country's culture and traditions. In 1967, pioneering Korean architect Kim Swoo-gen sought to find a cultural identity free from Japanese influence and traditional Korean style. Foster + Partners designs first bathroom range for Porcelanosa.