Marine debris is litter that ends up in oceans, seas, and other large bodies of water. The Great Pacific Garbage Patch, also known as the Pacific trash vortex, spans waters from the West Coast of North America to Japan. The patch is actually comprised of the Western Garbage Patch, located near Japan, and the Eastern Garbage Patch, located between the U.S. states of Hawaii and California. These areas of spinning debris are linked together by the North Pacific Subtropical Convergence Zone, located a few hundred kilometers north of Hawaii. This convergence zone is where warm water from the South Pacific meets up with cooler water from the Arctic.

The entire Great Pacific Garbage Patch is bounded by the North Pacific Subtropical Gyre. Love Food Hate Waste. Carrot-top pesto and beetroot-leaf dip: how to waste less in the kitchen this year. The Water We Eat - Discover how much WATER we EAT every day. Are spotty fruits and vegetables safe to eat? - Elizabeth. There’s a whole world of plant pathogens out there. 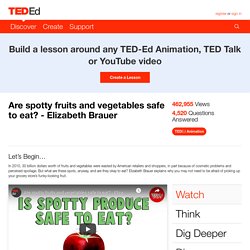 Every single plant species has multiple types of pathogens. To find out more about how microbes infect their host and microbe life styles, check out the American Phytopathology Website. To see just how disgusting those spots can get and what they do over time take a look at this site! Do you think that plant and animal immune systems are very different? How different? Did this lesson leave you wondering about food waste? Our plastic footprint: reuse to take the pressure off recycling.

The recycling crisis is forcing us all to consider what to do with our waste, but recycling should be the last resort for the global problem of plastic pollution. 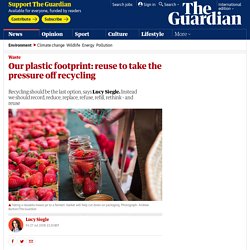 37 Ways to Reduce Trash in Your Home. We have a trash problem. 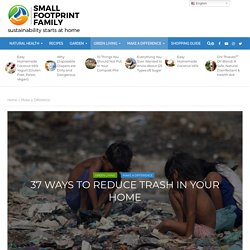 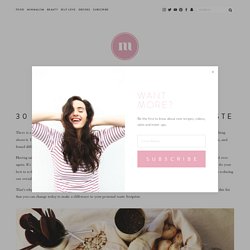 Learn to cook and make your own food I have lots of videos to help you learn how to cook your own delicious vegan food and to avoid getting takeaway. (148) Loliware: The First And Only Biodegr(edible) Cups. Red Dot Design Award: Knock-Troc. Kaffeeform coffee cups are made from old recyclable coffee grounds. Berlin backyard start-up kaffeeform has won the red dot product design award 2018 for its innovative use of old recyclable coffee grounds to create reusable coffee cups. german designer julian lechner is behind the brand which combines used coffee grounds with natural glues to create a new material. all images courtesy of kaffeeform lechner creates the coffee cups by first collecting the leftovers from local cafes in berlin. he then combines them with natural glues and particles of wood from sustainable sources to produce a liquid that can be injection moulded to create the reusable cups. 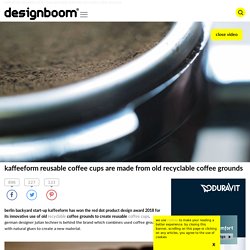 ‘as the global coffee consumption is steadily growing, the coffee grounds that are basically waste, will be available en masse‘, lechner says. ‘kaffeeform uses this wasted ressources, to creative a sustainable and eco-friendly alternative to products based on mineral oils.’ This alternative to single use plastics offers eco-friendly energy gel packaging for athletes. Ending world hunger, one meal at a time. Proudly telling the world about #generationIB in our 50th anniversary year MYP Personal Project connects local restaurants with food banks to eliminate food waste “A homeless man approached me one day asking for money to buy food. 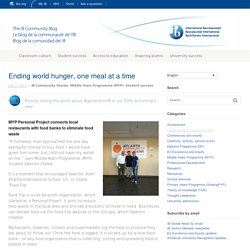 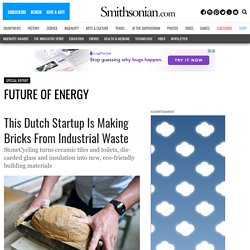 This was no ordinary blender though. Dutch designers convert algae into bioplastic for 3D printing. Dutch designers Eric Klarenbeek and Maartje Dros have developed a bioplastic made from algae, which they believe could completely replace synthetic plastics over time. 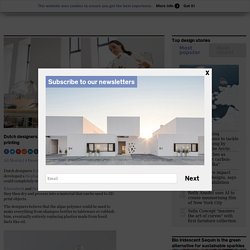 Klarenbeek and Dros cultivate algae – aquatic plants – which they then dry and process into a material that can be used to 3D print objects. The designers believe that the algae polymer could be used to make everything from shampoo bottles to tableware or rubbish bins, eventually entirely replacing plastics made from fossil fuels like oil. Do you even compost, bro? Instead of being an organism in nature’s vast ecosystem, you could literally run your own! 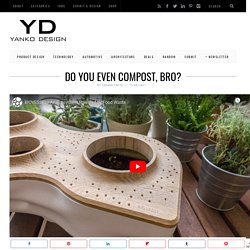 We generate a lot of waste, a large part of it being natural. However, in most scenarios, natural and man-made waste both end up in the same landfill, where the natural waste doesn’t decompose, or if it does, it decomposes at a rate six times slower than normal. You could put your natural waste to much better use with a compost pit like the BioVessel. Designed to turn every ounce of your waste into rich natural fertilizer, the BioVessel is an in-home compost pit. Throw your vegetable scraps and waste food into one of its holes, introduce some earthworms (nature’s engineers) to the mix and they break down your waste, turning it into a rich compost that you can directly use in the BioVessel, turning it into a planter, or use independently in other planters you may have around the house.

James Dyson Award. Sustainable design. CIRCULARIS. reuse. reduce. recycle. rethink. Bike Washing Machine : Wash Your Clothes While Riding The Stationary Bike - Tuvie. Bike Washing Machine, from the name of this project you would already know what it is. This project combines 2 activities into one. Riding a bike is a popular exercise, washing laundry is something that you might do on daily basis or at least once a weak (unless you keep buying new clothes and underwear), so why not combine them into a single useful equipment/appliance? Bike Washing Machine combines a stationary bicycle and washing machine, you can exercise while at the same time simultaneously washing your clothes.

These 14 Teenage Inventors Built a Glove That Translates Sign Language—and Other Tech Solutions by Lindsey Weedston. Teenagers tend to get a bad rap. No, I don’t mean they listen to bad rap. I mean that they get unfairly judged as lazy, immature, and generally incapable. Just last month, Roger Daltrey of The Who was moaning that kids these days don’t have any movements or sense of purpose, because apparently the only new band he knows is One Direction. Fresh Bowl. Paris is opening the world's largest urban rooftop farm. Europe’s most densely populated city is growing. But we’re not talking about people here: it’s growing fruit and vegetables.

At the edge of the French capital, an urban farm is being built that will supply residents with a tonne of food a day. AIR-INK™ - Graviky Labs: Capturing air pollution and recycling to Inks. Air Pollution has been one of the most conspicuous of all the problems we face today. If not captured it causes health problems, global warming, haze- billions of dollars worth of losses to governments.

We capture pollution and then we turn it into Inks. Very few industries around the world have proper means to dispose off the captured pollution waste. Several industries that use fossil fuels, brick kilns, pyrolysis plants currently capture pollution and dump it into waste streams. AIR-INK is made by recycling the PM 2.5/soot that is produced by several industrial air polluting sources.

7 fashion brands that are designing out waste.