The Greener Bruno Taut (biomimicry), vegetal cities. Another case is presented for an organic visionary architecture; one that is born of the human imagination, but derived from nature. 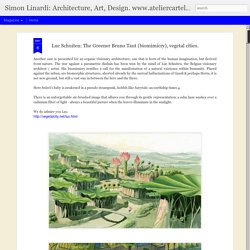 The war against a parametric disdain has been won by the mind of Luc Schuiten, the Belgian visionary architect / artist. His biomimicry testifies a call for the manifestation of a natural existence within humanity. Placed against the urban, are biomorphic structures, aborted already by the surreal hallucinations of Gaudi & perhaps Horta, it is not new ground, but still a vast way in between the here and the there. Researchers find a better power law that predicts earthquakes, blood vessels, bank accounts.

Giant earthquakes and extreme wealth may not appear to have much in common, but the frequency with which the "Big One" will hit San Francisco and how often someone will earn as much money as Bill Gates can both be predicted with a statistical measurement called a power law exponent. 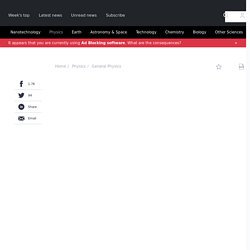 For the last century, researchers have used what's called a power law to predict certain kinds of events, including how frequently earthquakes at certain points on the Richter scale will occur. But a University of Michigan researcher noticed that this power law does not fit all circumstances. Mitchell Newberry, a Michigan fellow and assistant professor at the U-M Center for the Study of Complex Systems, suggests an adjustment to the power law that would account for events that increase or decrease in fixed proportions—for example, when a manager makes roughly 20 percent more than his or her employee. 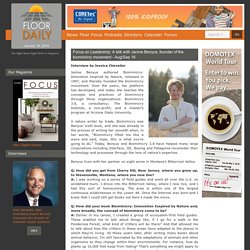 Buildings are systems. They exist... - Build Naturally with Sigi Koko. Hedgehog Spines Hold the Secret to Preventing Concussions. If you ever find yourself watching hedgehog go about its day, you’ll notice that they tend to fall out of trees — a lot. 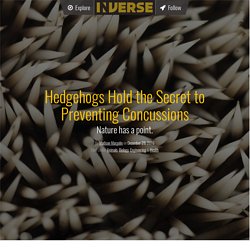 Wild hedgehogs climb trees as high as 30 feet, looking for insects and food to eat. Sometimes they fall by accident, other times they fall on purpose to evade a predator or because falling is a lot faster than climbing down. As a hedgehog falls toward the ground, it keeps itself safe by rolling into a ball to surround itself with “spines” that absorb the impact. Biomimicry Could Be Your Child’s Career – Parenting for the Future. Biomimicry what? 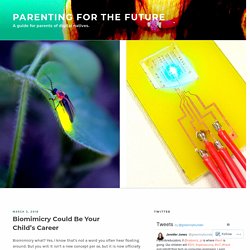 Yes, I know that’s not a word you often hear floating around. But you will. It isn’t a new concept per se, but it is now officially a discipline and a rapidly growing one because the technology that supports it is becoming more sophisticated, and it has the potential to yield solutions for sustainable design and climate change. UPDATE: since so many are asking about... - Biomimicry Institute. What is Biomimicry? Broadcast Yourself. 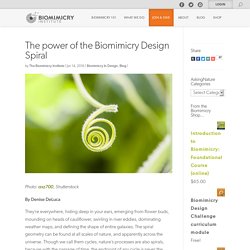 The spiral geometry can be found at all scales of nature, and apparently across the universe. Though we call them cycles, nature’s processes are also spirals, because with the passage of time, the endpoint of any cycle is never the same as the starting point. From ambiguous to aspirational: Is your company ready to be bio-inspired? – Biomimicry Institute.

By Taryn Mead This is the first of a two-part series to introduce Dr. 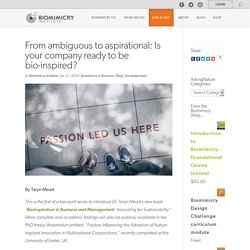 Biomimicry: What Would Nature Do Here? - Bioneers. SYNAPSE by B3.8 - Climate change solutions: How does nature manage carbon? Innovators Compete for $100,000 to Revolutionize Global Food Systems. “Can you imagine buildings that could produce oxygen, absorb CO2, and use and recycle stormwater efficiently—like how nature would do it?” 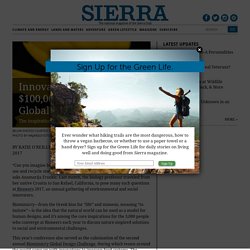 Asks Anamarija Frankic. Last month, the biology professor traveled from her native Croatia to San Rafael, California, to pose many such questions at Bioneers 2017, an annual gathering of environmental and social innovators. Biomimicry—from the Greek bios for “life” and mimesis, meaning “to imitate”—is the idea that the natural world can be used as a model for human designs, and it’s among the core inspirations for the 3,000 people who converge at Bioneers each year to discuss nature-inspired solutions to social and environmental challenges.

This year’s conference also served as the culmination of the second annual Biomimicry Global Design Challenge, during which teams around the world came up with innovations to improve food systems. The design challenge is sponsored by the Biomimicry Institute, and the Ray C. Biomimicry: How Designers Are Learning from the Natural World. In 1989, Japan’s Shinkansen Bullet Train had a problem. 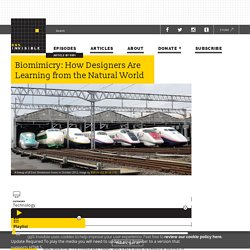 It was really fast, pushing 170 miles per hour. But every time it exited a tunnel, it created a loud sonic boom that disrupted surrounding residential neighborhoods. So an engineering team was brought in to design a quieter, faster and more efficient train. Biomimicry Immersion Workshop in Costa Rica. What To Expect Every immersion workshop is tailored to the local ecosystem, setting up each day to be brimming with content and exploration. 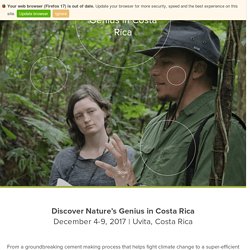 You should plan to clear your agenda and fully immerse yourself in the biomimicry experience. In Costa Rica, we’ll explore mangroves by kayak, snorkel among parrotfish in the coral reef, and discover the wonders of the rainforest with a local expert. 14 Smart Inventions Inspired by Nature: Biomimicry: Nature as R&D Lab. Companies seeking breakthrough products tend to ignore the greatest invention machine in the universe: life’s more than three-billion-year history of evolution by natural selection.

They have many advantages over conventional silicon solar cells, which require energy intensive processes to create. DSSCs are generally considered much more environmentally benign to produce than conventional solar cells because they use relatively non-toxic materials that require little energy to manufacture. In this lesson plan, students learn how to produce electricity by constructing a dye-sensitized solar cell at ambient temperatures, using a few simple materials. The lab offers an excellent hands-on illustration of a biomimetic technology and has been used successfully with students in upper elementary grades to undergraduates in college. Lesson plans for the lab are provided in both English and Spanish geared toward high schoolers in 10th-12th grade, and home schoolers in upper elementary grades through high school.

Lab procedure video. Biomimicry 3.8. Biomimicry Institute - Home. Biomimicry. Genius of Biome Report by HOK. Bionic leaf turns sunlight into liquid fuel: New system surpasses efficiency of photosynthesis. The days of drilling into the ground in the search for fuel may be numbered, because if Daniel Nocera has his way, it'll just be a matter of looking for sunny skies. Nocera, the Patterson Rockwood Professor of Energy at Harvard University, and Pamela Silver, the Elliott T. and Onie H.

Adams Professor of Biochemistry and Systems Biology at Harvard Medical School, have co-created a system that uses solar energy to split water molecules and hydrogen-eating bacteria to produce liquid fuels. The paper, whose lead authors include post-doctoral fellow Chong Liu and graduate student Brendan Colón, is described in a June 3 paper published in Science. An earthworm inspired biomimicry innovation wins $10K. A new innovation that enables the creation of healthier soils by retaining nutrients and preventing runoff from fields has won the first Living Product Prize in the Biomimicry Global Design Challenge.

The $10,000 prize was awarded to the University of Oregon design team in Pittsburgh, Pennsylvania. The system’s entire design was inspired by mimicking earthworms, which create natural filtration systems. The goal of the system is to reduce the amount of nutrients that are lost from the soil in runoff, improving the overall health of the soil and reducing the amount of fertiliser used. It is designed to be a direct replacement for conventional agricultural drainage, more closely emulating the natural environment. Podcast: Michael Pawlyn - Ecosystems as a unifying model for cities and Industry - Circulate. Janine Benyus: Biomimicry in action. Biomimicry versus Biophilia: What's the Difference? - Terrapin Bright Green.

Learn more about our work and services in biophilia and bioinspired innovation by emailing us at info@terrapinbg.com. Follow the conversation on twitter: @TerrapinBG. 5 great GreenBiz videos about biomimicry. "WWND" is the name of this design game — that is, "What Would Nature Do? " Greenbiz. TED talks related to Biomimicry.