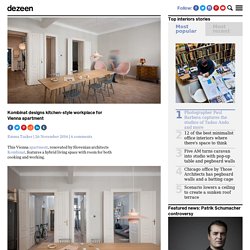 The firm demolished a partition wall to create the space in the 96-square-metre apartment, which overlooks a street in the Austrian capital. To enable this area to serve as a kitchen, office and meeting place, Kombinat installed a long counter that functions as a dining table but also a workstation when required. Wooden storage adjacent to the front window forms both a kitchen counter and a place for readers to perch. Tiny Houses From MUJI - TINY HOUSE TOWN. If you're a fan of the Japanese retailer MUJI, get ready for an exciting addition to the company's list of products- tiny houses! 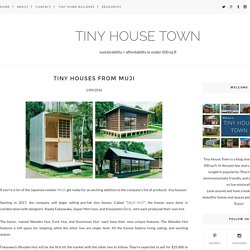 Starting in 2017, the company will begin selling pre-fab tiny homes. A Little Design creates 22m2 apartment in Taiwan. Taiwanese studio A Little Design has renovated a 22-metre-square micro apartment to serve every need of its occupant (+ slideshow). 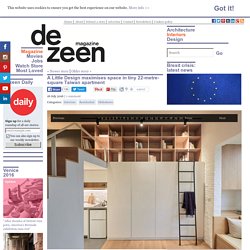 A bath, floor-to-ceiling storage and space for exercise are included in the compact flat, located in Taipei City, where property prices are driving young buyers into smaller homes. A Little Design described the client as a young woman who travels frequently for work, and when she gets home "all she needs is a hot bath and a good sleep". As such, the team designed a fully equipped bathroom, replacing the former shower with a full bath and moving the washing machine to the kitchen, which has more limited function. Storage spans one entire wall of the living room, covering the 3.3 metres from floor to ceiling. The storage features wardrobes on the bottom and square shelves on top, allowing the resident to access the clothes she needs easily every day, while using a ladder on the occasions she needs her books and other objects.

Archiquote2. Willem Dudok: Meet the Father of Dutch Modernism. Willem Marinus Dudok (6 July 1884 - 6 July 1974) was one of The Netherlands' most influential Modernist architects. 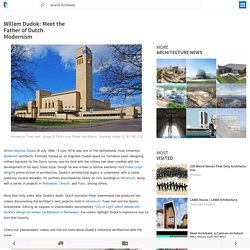 Formally trained as an engineer, Dudok spent his formative years designing military barracks for the Dutch forces, and his time with the military has been credited with the development of his early linear style, though he was known to borrow elements from Frank Lloyd Wright's prairie school of architecture. Dudok's architectural legacy is undeniable: with a career spanning several decades, his portfolio encompasses nearly all civic buildings in Hilversum, along with a series of projects in Rotterdam, Utrecht, and Paris, among others. More than forty years after Dudok's death, Dutch journalist Peter Veenendaal has produced two videos documenting the architect's best projects, both in Hilversum: Town Hall and the Sports Grandstand. Verticalforest-7. Willem Dudok: Meet the Father of Dutch Modernism. Constructing a Dream World out of Ordinary Architecture.

Welcome to a world governed by line, form, and color. 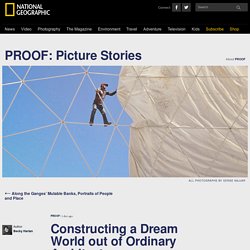 Enter one of Serge Najjar’s square frames and end up in an isolated dreamscape—high above the ground, outside of time, and punctuated by the suspended motion of a stranger. I stumbled into this world myself through the Instagram rabbit hole and have been curious about these images ever since. @Serjios, as Najjar identifies on Instagram, doesn’t post captions with his photos, adding to their intrigue. Hooked by his consistent style, I reached out to him for the story behind these scenes. “It started four years ago,” he says of his interest in photography. Extending Window. Extending Window November 2nd, 2015 | Tech | Innovative window designed by Aldana Ferrer Garcia allows people to lean over the edge and look at the sky. 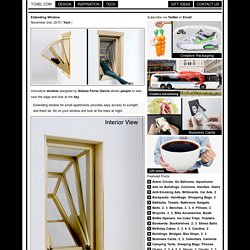 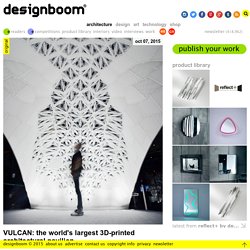 20 of the World's Best Building Images Shortlisted for Arcaid Awards 2015. Arcaid has shortlisted 20 of the year's best architectural images for their 2015 awards - the annual Arcaid Images Architectural Photography Awards. 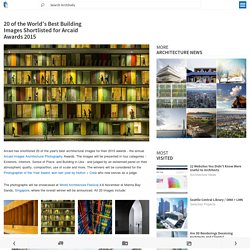 The images will be presented in four categories - Exteriors, Interiors, Sense of Place, and Building in Use - and judged by an esteemed panel on their atmospheric quality, composition, use of scale and more. Gallardo-0 – Fubiz Media. NASA Digs This Idea for Robots to Build Igloos on Mars. Well before NASA announced that liquid water exists on Mars, a team of designers from Clouds Architecture Office and Space Exploration Architecture (SEArch) toiled to figure out how we could use ice—so, in essence, water—as shelter on the Red Planet. 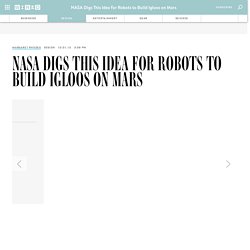 It’s a simple idea, really. We’ve known for some time that Mars is home to large quantities of water ice, and that this ice could serve as a locally sourced building material. Ice is also translucent, and all homes need a little natural light. The team of eight ultimately came up with the Mars Ice House, a sloping, triangular structure that would be autonomously built by robots using additive manufacturing techniques. 5 Eco-Friendly Homes In Europe. The world’s largest Delta 3D printer can print nearly zero-cost housing out of mud. The future of affordable (and sustainable) housing may lie with 3D printing. 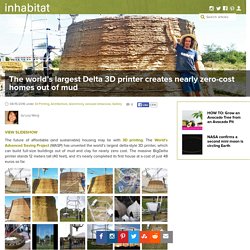 The World’s Advanced Saving Project (WASP) has unveiled the world’s largest delta-style 3D printer, which can build full-size buildings out of mud and clay for nearly zero cost. The massive BigDelta printer stands 12 meters tall (40 feet), and it's nearly completed its first house at a cost of just 48 euros so far. Tomás amat estudio bases the cicada pavilion on insect morphology. Sep 17, 2015. Your first source for architecture, design & art news. ‘I’ve seen the future, and it’s …. paper’ Interlocking origami zigzag paper tubes can be configured to build a variety of structures that have stiffness and function, but can fold compactly for storage or shipping. (credit: Rob Felt) A new origami “zippered tube” design that makes paper-based (or other thin materials) structures stiff enough to hold weight, yet can fold flat for easy shipping and storage could transform structures ranging from microscopic robots to furniture and even buildings.

That’s what researchers from the University of Illinois at Urbana-Champaign, the Georgia Institute of Technology, and the University of Tokyo suggest in a Proceedings of the National Academy of Sciences paper. Swayinstallation-3 – Fubiz Media. WASP Unveils the World’s Largest Delta 3D Printer – 12 Meters Tall & Set to Print Houses. Over the past couple of years, we have seen our fair share of mammoth sized 3D printers, but perhaps none quite as intriguing as the one which WASP plans to present at an upcoming show in Massa Lombarda, Italy next weekend (September 18 – 20). WASP (World’s Advanced Saving Project), a company which we have covered numerous times in the past, has been striving to bring 3D printed homes to 3rd world, developing countries around the globe. The idea is a simple one; “create a means for affordable fabrication of homes, and provide these means to the locals in poverty stricken areas”.