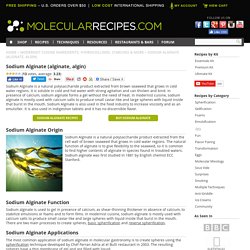 Sodium Alginate Function Sodium alginate is used to gel in presence of calcium, as shear-thinning thickener in absence of calcium, to stabilize emulsions or foams and to form films. Sodium Alginate Applications The most common application of sodium alginate in molecular gastronomy is to create spheres using the spherification technique developed by Chef Ferran Adria at el Bulli restaurant in 2003. Sodium alginate is also used as stabilizers in ice cream. View recipes with Sodium Alginate. 041a - Agars for Microbiology Media and Other Uses. There are many types of agar produced in many countries. 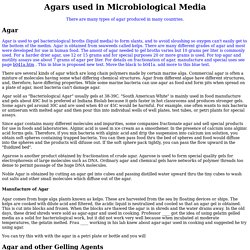 Agar Agar is used to gel bacteriological broths (liquid media) to form slants, and to avoid sloushing so oxygen can't easily get to the bottom of the medim. Additives : Sodium alginate. Function An algae-extracted gelling agent, sodium alginate is used in molecular gastronomy in association with calcium salts for the basic spherification and reverse-spherification processes, whether to make small caviar-like pearls or large ravioles. 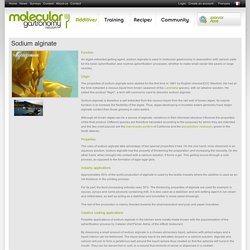 Origin The properties of sodium alginate were studied for the first time in 1881 by English chemist ECC Stanford. He had at the time extracted a viscous liquid from brown seaweed of the Laminaria species, with an alkaline solution. Alginic acid - Wikipedia. Alginic acid, also called algin or alginate, is an anionic polysaccharide distributed widely in the cell walls of brown algae, where through binding with water it forms a viscous gum. 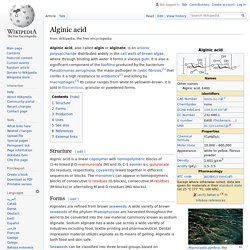 It is also a significant component of the biofilms produced by the bacterium Pseudomonas aeruginosa, the major pathogen in cystic fibrosis,[1] that confer it a high resistance to antibiotics[2] and killing by macrophages.[3] Its colour ranges from white to yellowish-brown. It is sold in filamentous, granular or powdered forms. Structure[edit] Agar - Wikipedia. A blood agar plate used to culture bacteria and diagnose infection. 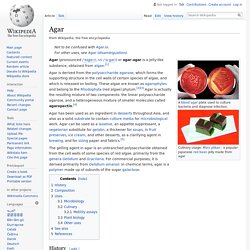 Agar (pronounced /ˈeɪɡɑːr/, US /ˈɑːɡər/) or agar-agar is a jelly-like substance, obtained from algae.[1] Agar is derived from the polysaccharide agarose, which forms the supporting structure in the cell walls of certain species of algae, and which is released on boiling. These algae are known as agarophytes and belong to the Rhodophyta (red algae) phylum.[2][3] Agar is actually the resulting mixture of two components: the linear polysaccharide agarose, and a heterogeneous mixture of smaller molecules called agaropectin.[4] DM - Elastic Impression Material Flashcards. Neri Oxman Is Redesigning the Natural World - SURFACE. Design by Noam Dvir Photos by Tony Luong June 7, 2016 Neri Oxman at MIT Media Lab. … Last March, on the day of Zaha Hadid’s death, Neri Oxman’s inbox exploded with emails. 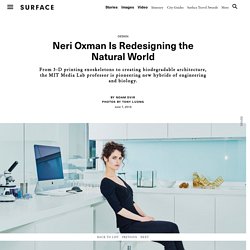 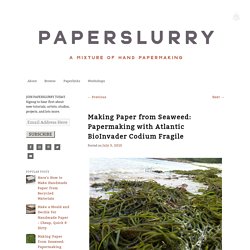 Originally featured on Aldo & Leonardo, (A Wilderness Science and Art Collaboration) these are Megan’s musings on making paper and art from a common invasive seaweed on Cape Cod. And without further ado… The relationships that exist within the natural world inspire me. A large part of my studio practice is exploring the materiality and transformative properties of plants, specifically I investigate invasive plants and their impact within the ecosystems they are invading. The first day I arrived on Cape Cod I encountered Codium fragile, commonly known as “Deadman’s Fingers” or “Green Fleece”.

The papermaking process for me begins with exploring sites that are being affected by invasive species and collecting plants. Make Your Own Paper from Plants. I have been making paper for over 15 years and I love every step, from wandering around outdoors scoping out the plants to removing the finished sheets from the drying rack. 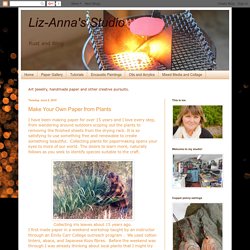 It is so satisfying to use something free and renewable to create something beautiful. Collecting plants for papermaking opens your eyes to more of our world. The desire to learn more, naturally follows as you seek to identify species suitable to the craft. Collecting iris leaves about 15 years ago. I first made paper in a weekend workshop taught by an instructor through an Emily Carr College outreach program .

Swamp grass: collected dry in late fall on left, dried fresh in summer on right. Chronique d’une makeuse en matériaux (23) Skill of the Month: Making Black Walnut Dye. (As featured in the October 2008 issue of Practically Seeking) Now is the time to head out and collect those wonderful green spheres from underneath Black Walnut trees! 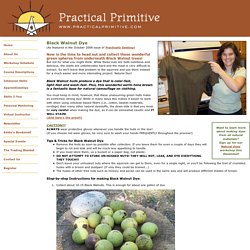 But not for what you might think. While these nuts are both nutritious and delicious, the shells are unbelievably hard and the meat is very difficult to extract. So we'll leave that problem to the squirrels and use them instead for a much easier and more interesting project: Natural Dye! Natural dyes: their history and how to make them. The first step in dyeing, after gathering the plant material, is to get the color out of the plants and into a pan of water. 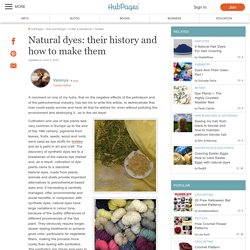 Some plants require special procedures, but in general, it's a simple matter that can be easily reassumed so:1) Shed fresh, soft plant parts, such as flowers and leaves, into a pan, cover with water, and simmer for half hour to an hour, until the water is colored and the tissues look bleached out. If the flowers or leaves have been dried, soak for several hours or overnight and then simmer in the same water.2) Press down on juicy fruits or berries to break the skins, then cover with water and add a little vinegar.

Soak a few days at room temeprature for best results.3) Chop or grind hard material, such as roots, bark or nut hulls, into chips: the smaller the chips, the better the dye flows (a hand-cranked flour mill or meat grinder works well). Works Archive - Lorenzo Oggiano. Tutorials « materiability research network. Plastic made from orange peel and CO2 - Advanced Science News. Share Tweet Email Take orange peel, extract the natural substance limonene, oxidize it and connect it with carbon dioxide, and what is produced is a biobased plastic, the basis for various industrial applications without high costs. 16-year-old South African girl invents drought-fighting super material from orange peels. In the midst of South Africa’s worst drought in recorded history, one Johannesburg schoolgirl has created a super absorbent polymer that could change the way crops are grown.

The polymer is created from simple, readily available recycled materials – orange peel and avocado skin – and it’s capable of storing hundreds of times its own weight in water. Kiara Nirghin’s project “No More Thirsty Crops” won the Google Science Fair’s Community Impact Award for the Middle East and Africa. Considering that South Africa’s agricultural union has been pleading with the government for subsidies to help weather the recent water crisis, Nirghin’s project could offer much-needed relief. Orange is the new black gold: how peel could replace crude oil in plastics. Orange juice, both delicious and nutritious, is enjoyed by millions of people across the world every day.

However, new research indicates that it could have potential far beyond the breakfast table. The chemicals in orange peel could be used as new building blocks in products ranging from plastics to paracetamol – helping to break our reliance on crude oil. Today’s society is totally reliant on the chemicals and materials that are obtained from our diminishing supply of fossil fuels. As such, there is an increasing global focus on the development of renewable chemical feedstocks from a variety of sustainable sources such as sugarcane and fatty acids in the production of biofuels.

And the chemically rich essential oils contained within waste citrus peels are another such source that is being investigated with real zest. This is promising, as the orange juice industry uses highly inefficient and wasteful juicing processes, with almost 50% of the fruit thrown away. A fruitful idea: fabric made from orange peel by Orange Fiber. In Italy, the citrus industry discards one million tonnes of citrus fruit peels annually. While the peels are of course biodegradable, it still costs a lot of money to dispose of them properly.

The start-up Orange Fiber, run by Adriana Santanocito and Enrica Arena, has developed a new kind of fabric, which is entirely made of waste citrus fruit peels. The idea came to Santanocito while working on her thesis in fashion design. Since Sicily, where she is from, is responsible for a major amount of peels, she tried to think of a way to reduce the amount of waste. And thus the idea to make fabric from the discarded peels was born. Eeuw geleden werd eerste vrouw professor - NRC. Artists Materials - Pigments from the Earth: Part 1 - Natural Pigments. Finding and collecting earth pigments can be both exciting and rewarding endeavor. Collecting pigments from the earth is something that can be done causally as you drive through the country, or with much planning and preparation to identify and collect specific mineral pigment types. This is the first article in a series on finding, collecting and preparing your own earth pigments.

A few years ago, I stopped along Highway 80 in the Sierra Nevada Mountains of California, about an hour west of Lake Tahoe. Recent road construction had scarred the earth next to the highway, revealing a deep blood-like orange beauty. Not often leaving my car so close to speeding traffic on an interstate highway, I opened the car door with excitement and some trepidation. Pigge weet raad met natriumbicarbonaat - drogisterij A.J. van der Pigge. A Fresh Perspective on the Psychology of Scent. The Illustrated Bead Bible: Terms, Tips & Techniques - Theresa Flores Geary, Debra Whalen.

Sodium metabisulfite. The Properties and Parameters of Experimental Bioplastics by gabriella smith on Prezi.