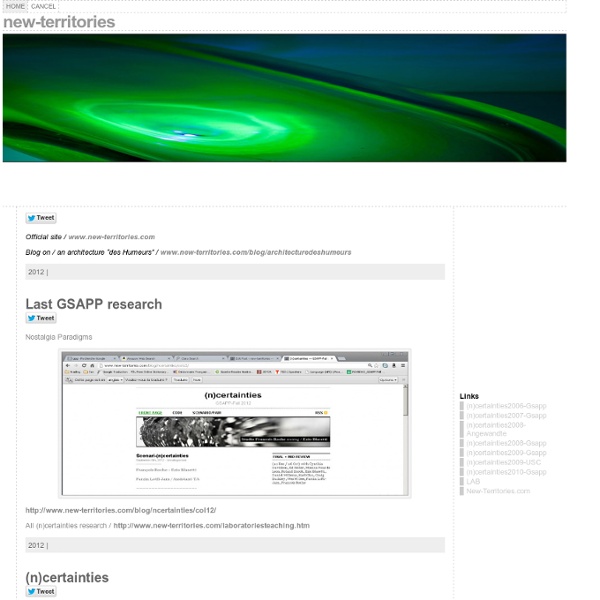 French + English Version ‘From Radicalism to Idiotcracy, From Y.F. to P.S.’ At cross-purposes As multipurpose as a Swiss army knife, shunted back and forth every which way between art and architecture, he is at once an alibi, a foil, a spiritual father, a defeated ideologue whose scars are an atonement (the deafness, whether real or feigned – we’ll come back to it later) and rather handy… a paper architect, an ideologue, the kind of brand that keeps on giving, still legitimized by the French establishment, that funny alter cocker Yona Friedman® with the slight Slavic accent that makes you smile, whose foibles everyone forgives, since they’re so charming and “inoffensive.” Yona Friedman® is perfectly adaptable… inflatable balloons to mimic the Spatial City,[1] floating cartons filed with salon-utopian political phraseology, pathetic and pathological. Has Friedman become, through no fault of his own, an icon for fakers, architects who reek of cheap – and lazy – political aesthetics?

A Vertical Manifesto for Mumbai Finalist 2011 Skyscraper Competition Ankita Dahiya, Dhruv Bahl, Mayank Ojha India 1 The following key concepts, taking off from a conventional habitat, form the core of our design, along with justifying the manifestation of the adjective – vertical. Movie: tour of Architecture at Show RCA 2012 with Alex de Rijke Movie: the final tour we filmed at this year's Royal College of Art graduate show features projects from the Architecture course including a high-rise hotel growing tropical fruit and an insect-powered office tower. Above: Data Harvest by Christopher Green Professor of Architecture Alex de Rijke introduces the course and presents student Louis Hall's investigation into the way cities develop around motorway infrastructure and the effects major corporations might have on the built environment.

supermanoeuvre SUPERMANOEUVRE is an architectural practice that sees computation as a means of opportunistically collaborating with the heterogeneity and flux of social, cultural and ecological substrates. Employing both genetic and phenotypical strategies of formation in which multiple intelligences and behaviours compete for the gift of instantiation, supermanoeuvre seeks to move beyond the diagram as the dominant of architectural understanding. The resulting complex and adaptive morphologies achieve their definition performatively as the emergent outcome of highly specific architectural concerns embedded within generating rulesets. The City as an Ecosystem Currently our urban design and development practices work within the framing of modernism, which positions humans at the centre of existence that prioritises the status of objects and operates through the technology of machines. The processes engaged by modernism involve the simplification of systems to command their obedience, without any ideological commitment to return something in exchange for their servitude. In modern cities we have delegated their development to planners, architects and engineers, assigning roles to people, as one would identify parts of a machine.

supermanoeuvre SUPERMANOEUVRE is an international award winning architecture and innovation practice. The firm is led by three partners, Dave Pigram, Iain Maxwell and Chris Duffield and operates globally out of Sydney, Australia. The directors have considerable experience in leading roles on internationally significant projects ranging from cultural and government institutions to stadiums and large-scale urban developments. SUPERMANOEUVRE's projects and research have been exhibited internationally including at New York's Storefront for Art and Architecture, the 2008 and 2010 Beijing Architecture Biennales and the partners lectured on the firms work at such institutions as the Architectural Association in London; Columbia and Princeton Universities.

The big idea : Springbok & Radish Why this blog? After collective decades working as designers and developers in the industries of “things” (dishwashers, web sites, automobiles, software products, medical devices, buildings, and so on), the authors of this blog find themselves with a growing passion for work that more directly impacts the roots of social health and the enabling of systemic transformation, resulting in more social health. We find ourselves making a shift from working mostly with physical and digital materials to work that starts with “social materials.” (Sorry if that term sounds cold and academic. Interactive Art & Computational Design / Spring 2011 » LookingOutwards shawn sims-lookingOutwards-Project 4 I plan on continuing some of the work that began in the Marius Watz/MakerBot workshop a could of weeks ago. This potentially means that the project will include Reaction/Diffusion+Camera interactions and/or a digital output for Rapid Prototyping or milling. Comments Off

A Man-Made, Net-Zero Energy Island Off the Coast of Istanbul - Design This year Istanbul Design Week goes back to the future with a very ambitious project: HavvAda, a cutting-edge net-positive-energy residential island conceptualized by New York-based Studio Dror. Turkish developer Serdar Inan has commissioned the project, which will be unveiled in Istanbul on September 29. HavvAda will be built off Istanbul’s shore, using excavated soil from a new massive canal planned between the Black Sea and the Sea of Marmara. Inan has asked that the project be completed in time for the Turkish Republic’s Centennial in 2023. For the design, Dror has drawn on its fascination with spatial geometry, as well as Buckminster Fuller’s legacy in structural engineering and Ebenezer Howard’s Garden City. 12 LOUIS VUITTON Photos: Stephane Muratet Pop-Up Store | LOUIS VUITTON | Selfridges, London | August 24th 2012 Collaboration Louis Vuitton – Yayoi KusamaExecutive architect: MARC FORNES / THEVERYMANY, LLC Innovation: first carbon fiber self supported shell applied to architecture. Ultra thin and lightweight structure without need for any primary structure.