Kaffa, Where the Plague Hitched a Ride to Europe. Plague Traveled from Asia to Europe, through Kaffa. 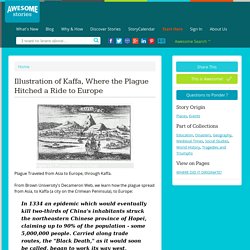 From Brown University's Decameron Web, we learn how the plague spread from Asia, to Kaffa (a city on the Crimean Peninsula), to Europe: In 1334 an epidemic which would eventually kill two-thirds of China's inhabitants struck the northeastern Chinese province of Hopei, claiming up to 90% of the population - some 5,000,000 people. Carried along trade routes, the "Black Death," as it would soon be called, began to work its way west, striking India, Syria, and Mesopotamia.In 1346, the Plague came to Kaffa, a Genoese cathedral city and a port central to the successful Genoese trade industry located on the Crimean Peninsula of the Black Sea.

The Tartar forces of Kipchak khan Janibeg, backed by Venetian forces - competitors of the Genoese - had laid siege to Kaffa in hopes of removing the Genoese from one of the cornerstones of Europe's defense against Eastern attack and Genoa's dominance of east-west trade. The Siege of Kaffa and the Black Death. After ravaging Central Asia, the plague descended on China, India and Persia. 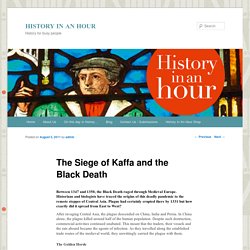 In China alone, the plague killed around half of the human population. Despite such destruction, commercial activities continued unabated. This meant that the traders, their vessels and the rats aboard became the agents of infection. As they travelled along the established trade routes of the medieval world, they unwittingly carried the plague with them. The Golden Horde It is with little wonder then that the plague continued to spread, reaching Southern Russia sometime between 1345 and 1346.

For several years, the Mongols had allowed a group of merchants from Genoa to control Kaffa, a bustling seaport on the Crimean Peninsula. In 1343, in the Crimean town of Tana, these tensions were transformed into violence after a fight between locals and Italians left one Muslim dead. ‘This Pestilential Disease’ In 1345-6, while laying siege to the city of Kaffa, the Mongol army became infected with the Black Death. KS3 Bitesize History - The Black Death : Revision. The Black Death, 1348. Coming out of the East, the Black Death reached the shores of Italy in the spring of 1348 unleashing a rampage of death across Europe unprecedented in recorded history. 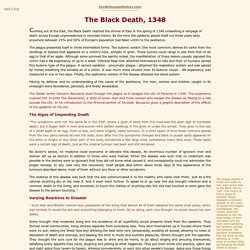 Although some survived the painful ordeal, the manifestation of these lesions usually signaled the victim had a life expectancy of up to a week. Having no defense and no understanding of the cause of the pestilence, the men, women and children caught in its onslaught were bewildered, panicked, and finally devastated. Many others adopted a course of life midway between the two just described. The Flagellants Attempt to Repel the Black Death, 1349< The Flagellants were religious zealots of the Middle Ages in Europe who demonstrated their religious fervor and sought atonement for their sins by vigorously whipping themselves in public displays of penance. 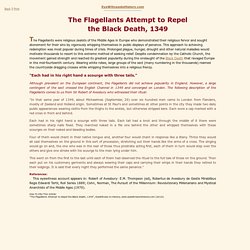 This approach to achieving redemption was most popular during times of crisis. Prolonged plague, hunger, drought and other natural maladies would motivate thousands to resort to this extreme method of seeking relief. Despite condemnation by the Catholic Church, the movement gained strength and reached its greatest popularity during the onslaught of the Black Death that ravaged Europe in the mid-fourteenth century. Wearing white robes, large groups of the sect (many numbering in the thousands) roamed the countryside dragging crosses while whipping themselves into a religious frenzy. Although prevalent on the European continent, the Flagellants did not achieve popularity in England. Each had in his right hand a scourge with three tails. The Pied Piper of Hamelin.

The Black Death - What Was It?