The Search for a Volatile Human Specific Marker in the Decomposition Process. Abstract In this study, a validated method using a thermal desorber combined with a gas chromatograph coupled to mass spectrometry was used to identify the volatile organic compounds released during decomposition of 6 human and 26 animal remains in a laboratory environment during a period of 6 months. 452 compounds were identified. 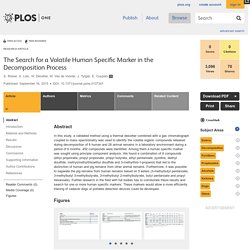 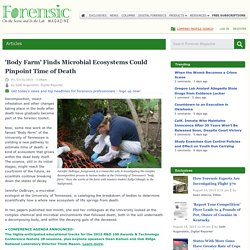 Theconversation. Meet the ‘living dead’: Forensic scientists’ new weapon. In the seconds after you breathe your last breath, the living dead take over. 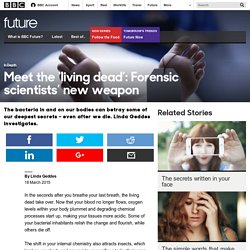 Now that your blood no longer flows, oxygen levels within your body plummet and degrading chemical processes start up, making your tissues more acidic. Some of your bacterial inhabitants relish the change and flourish, while others die off. The shift in your internal chemistry also attracts insects, which land on your body and creep into your orifices to lay their eggs, bringing with them their own microbial hitchhikers.

Several days later, these eggs hatch, and as the larvae begin to feast on your flesh they carry with them yet more microbes – as well as antimicrobial compounds that inhibit the growth of susceptible bugs. In other words, you might be dead, but your body is more alive than ever. Forensic scientists are now trying to harness this “necrobiome”. Unique bacteria Though you might consider yourself a single entity, you are in fact comprised of billions of living organisms. Predictable populations. Your death microbiome could catch your killer - life - 28 August 2014. MILLIONS want you dead. 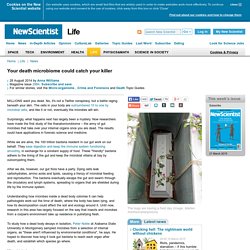 No, it's not a Twitter conspiracy, but a battle raging beneath your skin. The cells in your body are outnumbered 10 to one by microbial cells, and like it or not, eventually the microbes will win. Surprisingly, what happens next has largely been a mystery. Now researchers have made the first study of the thanatomicrobiome – the army of gut microbes that take over your internal organs once you are dead.

The results could have applications in forensic science and medicine. The Bugs That Decompose Bodies and Help Solve CSI Secrets. Post-mortem-change. Taphonomy: What Happens To Bones After Burial? Last week I discussed a way of preserving bodies almost indefinitely in some cases: embalming. 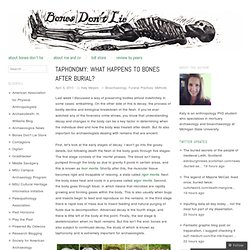 On the other side of this is decay, the process of bodily decline and biological breakdown of the flesh. If you’ve ever watched any of the forensics crime shows, you know that understanding decay and changes in the body can be a key factor in determining when the individual died and how the body was treated after death. Decomposition. FACTS: WHAT HAPPENS TO A BODY AFTER DEATH (WARNING - Not for the squeamish) UPON DEATH Nature is very efficient at breaking down human corpses. 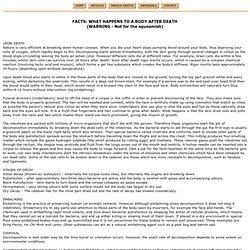 When you die your heart stops pumping blood around your body, thus depriving your cells of oxygen, which rapidly begin to die. Decomposing starts almost immediately, with the skin going through several changes in colour as the blood stops circulating leaving the body an ashen color. However different cells die at different rates. For example, brain cells die within a few minutes, whilst skin cells can survive over 24 hours after death. Upon death blood also starts to settle in the those parts of the body that are closest to the ground, turning the top part grayish white and waxy looking, whilst darkening the underside.

Forensic Scientist Shares Zombie Survival Guide. Kimberlee Sue Moran recalls that she was living in London in 2002 when she and her friend went to see the new zombie flick, 28 Days Later. 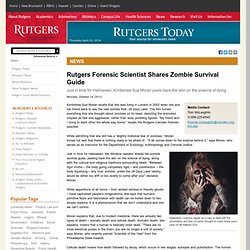 The film turned everything that she thought about zombies on its head, depicting the animated corpses as fast and aggressive, rather than slow, plodding figures. “My friend and I clung to each other the whole way home,” recalls the Rutgers–Camden forensic scientist. While admitting that she still has a “slightly irrational fear of zombies,” Moran knows full well that there is nothing really to be afraid of. 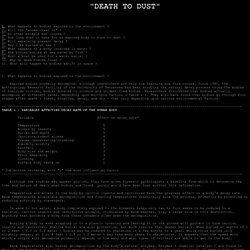 Temperature and access to the body by carrion insects and carnivores have the greatest effect on a body's decay rate. Warm temperatures also hasten decomposition by the body's natural enzymes.