Taylor & Francis Online. Infant circumcision causes 100 deaths each year in US. A new study published yesterday in Thymos: Journal of Boyhood Studies estimates that more than 100 baby boys die from circumcision complications each year, including from anesthesia reaction, stroke, hemorrhage, and infection. Because infant circumcision is elective, all of these deaths are avoidable. The International Coalition for Genital Integrity applauds that, for the first time, a rational attempt has been made to estimate the scale of the problem, and is simultaneously appalled by how many baby boys needlessly die each year in the United States. The study concluded: “These boys died because physicians have been either complicit or duplicitous, and because parents ignorantly said ‘Yes,’ or lacked the courage to say ‘No.’”

And called the deaths “an unrecognized sacrifice of innocents.” The study found that approximately 117 neonatal (first 28 days after birth) circumcision-related deaths occur annually in the United States, one out of every 77 male neonatal deaths. Penile Adhesion: The Hidden Complication of Circumcision. Penile Adhesion: The Hidden Complication of Circumcision ABSTRACT A penile or prepuce adhesion can occur after a circumcision if the remaining skin is not retracted after the circumcision has healed. 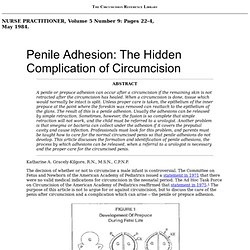 When a circumcision is done, tissue which would normally be intact is split. Unless proper care is taken, the epithelium of the inner prepuce at the point where the foreskin was removed can reattach to the epithelium of the glans. The result of this is a penile adhesion. Usually the adhesions can be released by simple retraction. Katharine A. Infant circumcision causes 100 deaths each year in US. CIRCUMCISION INSANITY. Deaths from Circumcision. Paediatr Child Health Vol 12 No 4 April 2007 Coroner's Corner. 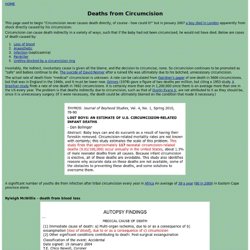 Boston/Botswana circumcision trial – 2. Yesterday’s post (click here) concerned a randomised trial from Botswana (accessible here), which was so poorly designed and executed by the researchers from Boston, that it failed to answer the question it ostensibly asked; which method of neonatal circumcision is best? 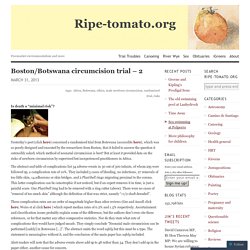 But at least it provided data on the risks of newborn circumcision by supervised but inexperienced practitioners in Africa. The abstract and table of complications list 34 adverse events in 30 out of 300 infants, of whom 295 were followed up, a complication rate of 10%. They included 5 cases of bleeding, no infections, 27 removals of too little skin, 14 adhesions or skin bridges, and 2 Plastibell rings migrating proximal to the corona. This latter complication can be catastrophic if not noticed, but if an expert removes it in time, is just a painful scare.

One Plastibell ring had to be removed with a ring cutter (above). Alert readers will note that the adverse events above add up to 48 rather than 34. In other words. Estimated U.S. Incidence of Neonatal Circumcision Complications. Death From Circumcision. By Danelle Frisbie © 2010 1 ounce of blood - size comparison in glass beaker to a U.S. quarterA newborn baby is in a state of critical hemorrhage from a loss of just 1 ounce of blood. 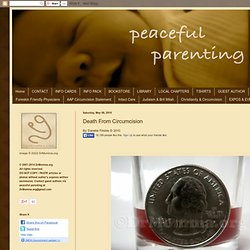 A baby only needs to lose 1 ounce of blood to hemorrhage, and just 2.3 ounces to die as a result of this blood loss. It can, and does, occur at a frightening quick pace. Slide11.jpg (JPEG Image, 600 × 403 pixels) Circ-penile-amputation. Necrotizing faciitus. Fasc2. The First Rule of Circumcision Deaths Is: Don’t Talk About Circumcision Deaths. So let’s see: A baby with a serious heart condition is circumcised, bleeds profusely, and dies. 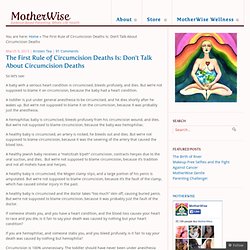 But we’re not supposed to blame it on circumcision, because the baby had a heart condition. A toddler is put under general anesthesia to be circumcised, and he dies shortly after he wakes up. But we’re not supposed to blame it on the circumcision, because it was probably just the anesthesia. A hemophiliac baby is circumcised, bleeds profusely from his circumcision wound, and dies. A healthy baby is circumcised, an artery is nicked, he bleeds out and dies. Botch Gallery 1 - skin bridges. A Gallery of Circumcisions 1. Skin-bridges A skin-bridge is formed when the raw remnant where the foreskin was cut attaches to the raw surface of the glans and heals that way. This happens after the doctor has lost interest in the case and the mother, who has been told her son's circumcised penis is now "low maintenance" and has no idea what it is "supposed" to look like, does not notice that anything is the matter.

It is not only ugly, but creates a space where smegma may be trapped and - unlike under the intact foreskin - can not be readily cleaned. Skin bridge. Circumcision Gallery - excessive skin removed. Flaccid-erect excess skin removed. Multi-scar 4-tw. Circumcision Complications. For a fuller list of Reasons Not to Circumcise, click there. 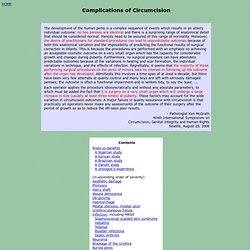 Death now has its own page. Strictly speaking, a disease has complications, surgery such as circumcision has side-effects. Risks vs Benefits An article in Pediatrics in January 2000 attempts to compare the benefits of circumcision with the risks. However, the only risks considered are the direct complications of surgery - and only some of those. "Complications" are defined very conservatively, including only those that are noticed before the baby leaves hospital or that lead to him being brought back to the same hospital or doctor. The researchers did not cite two of the main studies of complications, those of William and Kapila or Patel. Benefits are defined very generously, using a lot of the work of Wiswell, rather than those who estimate the benefits more conservatively, such as To. No intrinsic worth is assigned to having intact genitalia, or to not performing invasive surgery, or to having a choice.

Tight Extreme Painful Erections From Circumcision. BJ shares his experience with his tight painful erections from circumcision, resulting inrips, tears, and trips to the hospital…all of which could have been avoided had he not been circumcised. 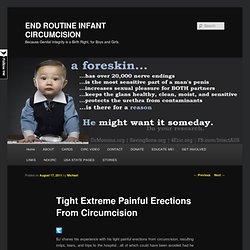 One of the risks associated with circumcision is that too much skin is removed, resulting in these tight painful erections, some of which are extreme, which you will read below. Thank you BJ for sharing with us your personal story. BJ writes, “I was circumcised when I was an infant. I never really knew the difference or that anything had ever been done to me until I reached puberty. THAT is when I knew something was wrong, erections were painful. Fear of Unknown/STD's/Complications.

[If you do not see a blue menu bar on the right, click here. 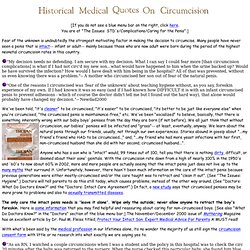 You are at "The Issues: STD's/Complications/Caring for the Penis".] Fear of the unknown is undoubtedly the strongest motivating factor in making the decision to circumcise. Many people have never seen a penis that is intact-- infant or adult-- mainly because those who are now adult were born during the period of the highest neonatal circumcision rates in this country. "My decision needs no defending. I am secure with my decision. No Family and No Child Should Have to Suffer the Way Michael Did. 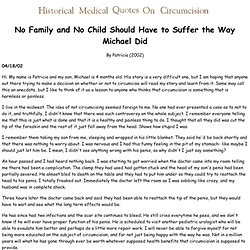 My name is Patricia and my son, Michael is 4 months old. His story is a very difficult one, but I am hoping that anyone out there trying to make a decision on whether or not to circumcise will read my story and learn from it. Some may call this an anecdote, but I like to think of it as a lesson to anyone who thinks that circumcision is something that is harmless or painless. I live in the midwest. The idea of not circumcising seemed foreign to me.

I remember them taking my son from me, sleeping and wrapped in his little blanket. An hour passed and I had heard nothing back. Three hours later the doctor came back and said they had been able to reattach the tip of the penis, but they would have to wait and see what the long term effects would be. Botched Circumcision Horror Stories - Fathering Magazine Reference. Circumcision Horror Stories What can go wrong? 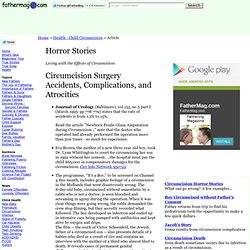