David Brin: Do We Really Want Immortality? David Brin is an honorary Sentient Developments guest blogger; this article is republished with his permission. 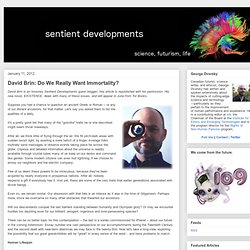 His new novel, EXISTENCE, deals with many of these issues, and will appear in June from Tor Books. Suppose you had a chance to question an ancient Greek or Roman -- or any of our distant ancestors, for that matter. Let's say you asked them to list the qualities of a deity. It's a pretty good bet that many of the "god-like" traits he or she described might seem trivial nowadays. After all, we think little of flying through the air. Few of us deem these powers to be miraculous, because they've been acquired by nearly everyone in prosperous nations.

Even so, we remain mortal. Will our descendants conquer the last barriers standing between humanity and Olympian glory? There can be no better topic for this contemplation -- the last in a series commissioned for iPlanet -- about our future in the coming millennium. Human Lifespan. Climbing Mount Immortality: Death, Cognition and the Making of Civilization. 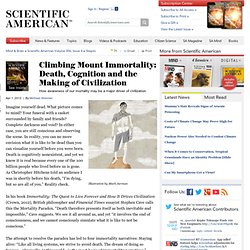 What picture comes to mind? Your funeral with a casket surrounded by family and friends? Complete darkness and void? In either case, you are still conscious and observing the scene. In reality, you can no more envision what it is like to be dead than you can visualize yourself before you were born. In his book Immortality: The Quest to Live Forever and How It Drives Civilization (Crown, 2012), British philosopher and Financial Times essayist Stephen Cave calls this the Mortality Paradox. The attempt to resolve the paradox has led to four immortality narratives: Staying alive: “Like all living systems, we strive to avoid death. All four fail to deliver everlasting life. That leaves us with the legacy narrative, of which Woody Allen quipped: "I don’t want to achieve immortality through my work; I want to achieve it by not dying.

" Is Death Bad for You? - The Chronicle Review. By Shelly Kagan We all believe that death is bad. 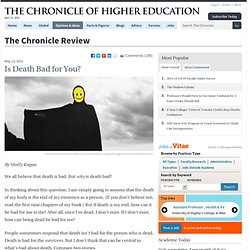 But why is death bad? In thinking about this question, I am simply going to assume that the death of my body is the end of my existence as a person. (If you don't believe me, read the first nine chapters of my book.) But if death is my end, how can it be bad for me to die? People sometimes respond that death isn't bad for the person who is dead. Story 1. Story 2. Story 2 is worse. In thinking about this question, it is important to be clear about what we're asking. Maybe nonexistence is bad for me, not in an intrinsic way, like pain, and not in an instrumental way, like unemployment leading to poverty, which in turn leads to pain and suffering, but in a comparative way—what economists call opportunity costs. Despite the overall plausibility of the deprivation account, though, it's not all smooth sailing.

If death has no time at which it's bad for me, then maybe it's not bad for me. Suppose that on Monday I shoot John. Hmm. Stephen Cave - Stayin' alive. A group of American psychologists has discovered a simple way of turning ordinary people into fundamentalists and ideologues. 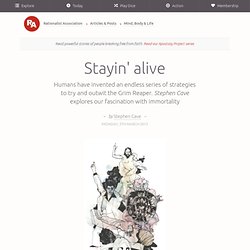 Their method requires neither indoctrination nor isolation nor any form of brainwashing; indeed, it can be done anywhere and in a matter of minutes. It is just this: the researchers remind these ordinary folks that they will one day die. In one experiment, for example, the psychologists asked a group of Christian students to give their impressions of the personalities of two people. In all relevant respects, these two people were very similar – except one was a fellow Christian and the other Jewish. Under normal circumstances, participants showed no inclination to treat the two people differently. The researchers behind this work – Sheldon Solomon, Jeff Greenberg and Tom Pyszczynski – were testing the hypothesis that most of what we do we do in order to protect us from the terror of death; what they call “Terror Management Theory”.

Close Encounters of the Cancer Kind: Is Philosophy a Preparation for Death? There is nothing like a diagnosis of stage four inoperable lung cancer with bone metastases to give one a shock. 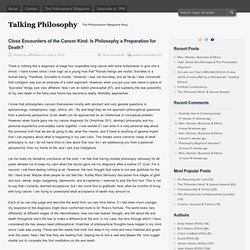 I have known since I took logic as a young man that “Human beings are mortal. Socrates is a human being. Therefore, Socrates is mortal.” However, I was not Socrates, and as far as I was concerned that syllogism was just an example of a valid argument. However, when you put your own name in place of “Socrates” things look very different. I know that philosophers concern themselves mostly with abstract and very general questions in epistemology, metaphysics, logic, ethics, etc.. Let me state my tentative conclusion at the start. Each of us can only judge and describe the world from our own time frame. Plato’s famously stated that “Philosophy is a preparation for death.” I confess a great love of Plato and his amazing Socrates.