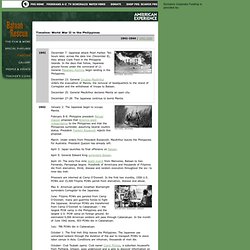 July: 786 POWs die in Cabanatuan. Bataan Death March. Bataan Death March One of the earliest and most severe mistreatment of prisoners of war became known to the world as the DEATH MARCH. All troops, both Filipino and American, gathered at various points on Bataan after the April 1942 surrender to the Japanese and then were forced to march 65 miles from Mariveles on the tip of Bataan to San Fernando under conditions that no one believed could happen. All valuables were confiscated; Jack Heinzel recalls: "All prisoners were stripped of personal possessions, watches, jewelry and cigarettes by the oncoming Japanese front line troops. " There was very little food, no water and no medical attention to the sick and wounded. Ferron Edwin Cummins attests in "This Is My Story" that "we were placed in a kneeling position, searched again and left sitting in the hot tropical sun for about six hours without food or water. 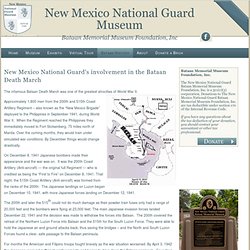 Approximately 1,800 men from the 200th and 515th Coast Artillery Regiment – also known as the “New Mexico Brigade” deployed to the Philippines in September 1941, during World War II. When the Regiment reached the Philippines they immediately moved to Fort Stotsenberg, 75 miles north of Manila. Over the coming months, they would train under simulated war conditions. By December things would change drastically. On December 8, 1941 Japanese bombers made their appearance and the war was on. The 200th and later the 515th could not do much damage as their powder train fuses only had a range of 20,000 feet and the bombers were flying at 23,000 feet.

For months the American and Filipino troops fought bravely as the war situation worsened. Those that survived the march would spend the next 40 months in horrific conditions in confinement camps. The 200th & 515th Corregidor men’s experience is worth taking notice. Bataan Death March (World War II) Bataan Death March. The Bataan Death March began on April 10, 1942, when the Japanese assembled about 78,000 prisoners (12,000 U.S. and 66,000 Filipino). 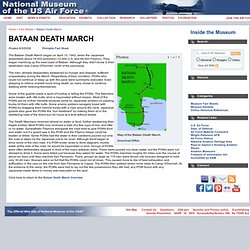 They began marching up the east coast of Bataan. Although they didn't know it, their destination was Camp O'Donnell, north of the peninsula. The men, already desperately weakened by hunger and disease, suffered unspeakably during the March. Regardless of their condition, POWs who could not continue or keep up with the pace were summarily executed. Even stopping to relieve oneself could bring death, so many chose to continue walking while relieving themselves. Asian Americans and Pacific Islanders in the U.S. Army. The Battle of Bataan ended on April 9, 1942, when U.S. 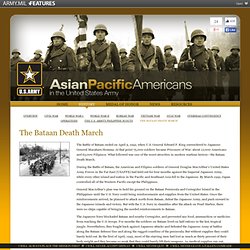 General Edward P. King surrendered to Japanese General Masaharu Homma. At that point 75,000 soldiers became Prisoners of War: about 12,000 Americans and 63,000 Filipinos. What followed was one of the worst atrocities in modern wartime history—the Bataan Death March. During the Battle of Bataan, the American and Filipino soldiers of General Douglas MacArthur’s United States Army Forces in the Far East (USAFFE) had held out for four months against the Imperial Japanese Army, while every other island and nation in the Pacific and Southeast Asia fell to the Japanese.