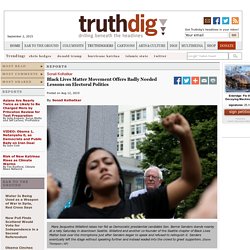 Bernie Sanders stands nearby at a rally Saturday in downtown Seattle. The Three Percent: Why BLM Seattle Won When They Interrupted Bernie Sanders. UPDATE: Activist Talib Kweli went on the Bill Maher Show and agreed, bringing in even more insight on why BLM Seattle was successful after interrupting Sanders. 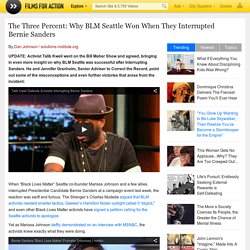 He and Jennifer Granholm, Senior Adviser to Correct the Record, point out some of the misconceptions and even further victories that arose from the incident: When “Black Lives Matter” Seattle co-founder Marissa Johnson and a few allies interrupted Presidential Candidate Bernie Sanders at a campaign event last week, the reaction was swift and furious. The Stranger’s Charles Mudede argued that BLM activists needed smarter tactics, Gawker’s Hamilton Nolan outright called it “stupid,” and even other Black Lives Matter activists have signed a petition calling for the Seattle activists to apologize. Yet as Marissa Johnson deftly demonstrated on an interview with MSNBC, the activists knew exactly what they were doing. Some of their tactics, from an activist’s perspective, are questionable. What does this mean?

Mic drop. Bernie Sanders and the Democrats: Why the disruptions. Well, I am not perplexed. 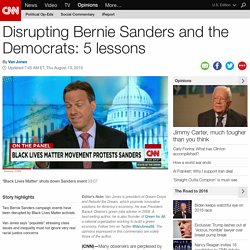 The new generation of civil rights activists never accepted "trickle-down economics" from conservatives. Today they are rejecting "trickle-down justice" from the liberals. An Open Letter to Bernie Sanders Supporters. Dear Bernie Sanders supporters, Shut up and listen for once. 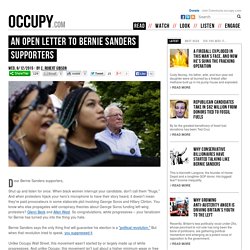 When black women interrupt your candidate, don't call them "thugs. " And when protesters hijack your hero's microphone to have their story heard, it doesn't mean they're paid provocateurs in some elaborate plot involving George Soros and Hillary Clinton. You know who else propagates wild conspiracy theories about George Soros funding left-wing protesters? Glenn Beck and Allen West. Annabel Park - Protesters Rude but Reaction More Rude. Bernie Sanders and the Democrats: Why the disruptions. Bernie Sanders is not the Black Lives Matter savior: Arguing over whether a single protest “worked” is missing the point. In writing, it is said that you must kill all your darlings. 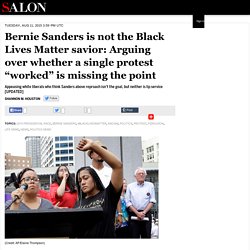 What sounds good and what feels good on the page and to the writer (and especially to the writer’s egos and emotions) may not be best for the body of work. So, you sacrifice and let go of small pieces for the whole. It’s a difficult, sometimes impossible lesson to learn, but damn if it doesn’t apply to just about all facets of life.

Sandra Bland, Michael Brown, Rekia Boyd, Eric Garner, Walter Scott, Freddie Gray, Tamir Rice, Samuel DuBose. Why White Liberals Need To Stop Policing #BlackLivesMatter. #BlackLivesMatter More Than the Hurt Feelings of White Progressives™ #ABLC. The last few weeks have exposed some real ugliness in the progressive movement, ugliness that has been simmering just below the surface for a long time, but which, due to Black women’s increasing recognition of our political power coupled with leadership in the #BlackLivesMatter movement and unapologetic commitment to dismantling white supremacy, has erupted into a fountain of White Progressive™ racism. 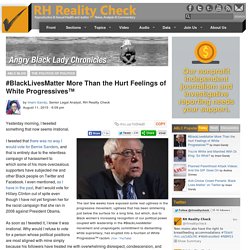 (Vox / YouTube) Yesterday morning, I tweeted something that now seems irrational. I tweeted that there was no way I would vote for Bernie Sanders, and that is entirely due to the relentless campaign of harassment to which some of his more overzealous supporters have subjected me and other Black people on Twitter and Facebook. I even mentioned, as I have in the past, that I would vote for Hillary Clinton out of spite even though I have not yet forgiven her for the racist campaign that she ran in 2008 against President Obama. As soon as I tweeted it, I knew it was irrational. Don’t. Bernie Sanders Gets Clear on Racial Politics. The Sanders paper titled “Racial Justice” states: “It is an outrage that in these early years of the 21st century we are seeing intolerable acts of violence being perpetuated by police, and racist terrorism by white supremacists.” 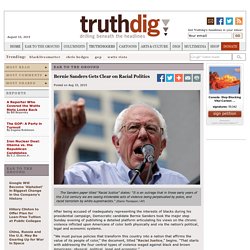 (Elaine Thompson / AP) After being accused of inadequately representing the interests of blacks during his presidential campaign, Democratic candidate Bernie Sanders took the major step Sunday evening of publishing a detailed platform articulating his views on the chronic violence inflicted upon Americans of color both physically and via the nation’s political, legal and economic systems. “We must pursue policies that transform this country into a nation that affirms the value of its people of color,” the document, titled “Racial Justice,” begins. “That starts with addressing the four central types of violence waged against black and brown Americans: physical, political, legal and economic.” BELOW: Watch Symone Sanders introduce Sen. The Real Black Lives Matter Wants Activists To Apologize to Bernie Sanders.

Black Lives Matter wants the two women who shut down a Bernie Sanders event in Seattle on Saturday to publicly apologize to the Senator and Presidential Candidate. 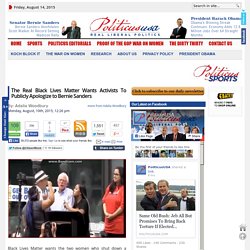 Jason Easley wrote about Marissa Johnson and Mara Willaford shutting down Bernie Sanders’ rally in Seattle. They led organizers and the media to believe they are part of Black Lives Matter. It’s not hard to understand why. BLM is succeeding in its efforts to raise awareness and get action on the multitude of issues that are a direct consequence of structural racism. The Black Lives Matter movement is very loosely structured without a central organization. This is explained in a tweet by Sean Jordon. In other words, there is an organization called Black Lives Matter.

Bernie Sanders, Black Lives Matter and the racial divide in Seattle - The Seattle Globalist. On Saturday, Bernie Sanders came to Seattle for a fundraiser and rally. 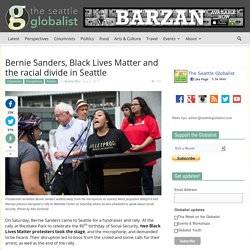 At the rally at Westlake Park to celebrate the 80th birthday of Social Security, two Black Lives Matter protesters took the stage, and the microphone, and demanded to be heard. Their disruption led to boos from the crowd and some calls for their arrest, as well as the end of the rally. For the rest of the afternoon and evening, social media was in an uproar over the actions of these two women. Many stated that the women were just hurting the #BLM cause, others wondered why Sanders was targeted and not other candidates. Some claimed that the women were plants paid by the Clinton campaign to stir up trouble. #BlackLivesMatter Protesters Are Not the Problem. The activist group #BlackLivesMatter emerged out of the rage and mourning that accompanied George Zimmerman’s acquittal for the murder of Trayvon Martin more than three years ago. 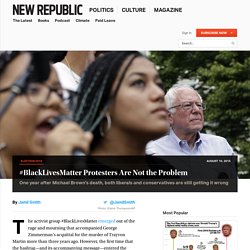 However, the first time that the hashtag—and its accompanying message—entered the American lexicon to stay was one year ago this past Sunday, when Michael Brown, another unarmed black teenager, was gunned down by a Ferguson, Missouri police officer, less than one month after an NYPD chokehold took Eric Garner’s life. On Sunday night, Ferguson reverted to its younger, violent self again, complete with a commemorative protest on West Florissant Avenue being met with police and things turning tragically violent in short order. Guest Editorial: Why Saturday's Bernie Sanders Rally Left Me Feeling Heartbroken. Washington State Senator Pramila Jayapal (not pictured) was at the Bernie Sanders rally that got interrupted yesterday in Seattle.

She offered some thoughts about the event on Facebook, and we're reprinting them in full here. Alex Garland Many people have been e-mailing and asking me how I am thinking about what happened yesterday at the event on social security and medicare, when some protesters identifying as Black Lives Matter got up on stage to challenge Bernie Sanders on race and racism, and ended up shutting down the event so Bernie could not speak.

I'm struggling but in the spirit of community, here's what comes to mind. The Good in BLM disruption of Sanders. O'Malley and Sanders interrupted by Black Lives Matter protesters in Phoenix. The Democratic presidential candidates Martin O’Malley and Bernie Sanders were heckled and constantly interrupted during an appearance at the Netroots Nation conference on Saturday, as protesters over police brutality towards African Americans took the stage in Phoenix. O’Malley was eventually forced offstage, after the protest and his attempts to respond delayed the appearance of Sanders. O’Malley, who stood patiently throughout the interruption, which was led by Tia Oso, national coordinator for the Black Alliance for Just Immigration in Phoenix, attempted to answer questions from activists.

Reverse Dog-Whistle Racism. DN! "I Don’t Believe Sandy Committed Suicide": #BlackLivesMatter Co-Founders Speak Out on Sandra Bland. This is a rush transcript. Copy may not be in its final form. NERMEEN SHAIKH: This week, protests across the country have called for justice in Sandra Bland’s case. Here in New York, at least a dozen people were arrested Wednesday after sitting down and locking arms in the street. They also raised questions about the death of Kindra Chapman, an 18-year-old African American found dead in her jail cell in Alabama just one day after Sandra Bland was found dead. Chapman was arrested July 14th on accusations of stealing a cellphone. UNIDENTIFIED: And I’m a second year in college. KALISA MOORE: I am KaLisa Moore of Peoples Power Assemblies. KIMBERLY: My name is Kimberly.

AMY GOODMAN: The lives of Sandra Bland, India Clarke, Renisha McBride, Aiyana Stanley-Jones, Michael Brown, Eric Garner, Tamir Rice, Kajieme Powell, John Crawford and so many others will be the focus of a major Movement for Black Lives Convening in Cleveland this weekend. We welcome you all to Democracy Now!

Robert Reich (Why Progressives Must Stay United) Imprisoning a staggering number of our people is wrong. The way our nation does it is even worse. We must end mass incarceration, now. If I’m walking down the street with a Black or Latino friend, my friend is way more likely to be stopped by the police, questioned, and even arrested. Even if we’re doing the exact same thing—he or she is more likely to be convicted and sent to jail. Unless we recognize the racism and abuse of our criminal justice system and tackle the dehumanizing stereotypes that underlie it, our nation – and our economy – will never be as strong as it could be.

Please take a moment to watch the accompanying video, and please share it so others can understand what’s at stake for so many Americans. DN! blacklivesmatter activists disrupt sanders and o malley speeches. AJ+ - #BlackLivesMatter Protesters Interrupt Bernie Sanders. Black Lives Matter. Sandra Bland. The Link between Inequality & Racism. Please Don't Let Idiots Ruin the #BlackLivesMatter Movement Because it is Too Important. FILED TO: Headline Articles With the routine killing of unarmed African Americans by the police, the Black Lives Matter movement could not be more important an issue right now. It should be at the forefront of any serious Presidential candidate’s campaign, and anyone who does not address it appropriately should not be taken seriously.

With the explosion of cell phone videos and police body cams, there is no hiding how bad the problem is, and there is no turning back. When it comes to protesting effectively though, strategy must always take precedence over raw feeling. One easy way to become irrelevant in the social media age is to let the extremists become the face of your movement – or in the case of organizations like Code Pink and PETA, become the movement itself. “Get him in check or we’re shutting this event down right now,” Johnson told Sanders as one of his managers attempted to stop her from interrupting Sanders, who had literally just started speaking.