Death of a salesman 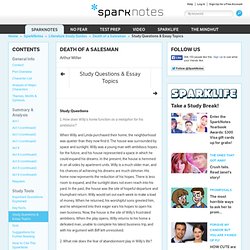 How does Willy’s home function as a metaphor for his ambitions? When Willy and Linda purchased their home, the neighborhood was quieter than they now find it. The house was surrounded by space and sunlight. Willy was a young man with ambitious hopes for the future, and his house represented a space in which he could expand his dreams. 2. Willy’s obsession with making his family conform to the ideals of the American Dream seems rooted in the childhood emotional trauma of his abandonment by his father. Willy’s fear of abandonment is probably also responsible for his obsession with being well liked. 3. Willy believes that Biff’s discovery of Willy’s adulterous affair contributed to Biff’s disillusionment with the American Dream that Willy cherishes so dearly.

Suggested Essay Topics 1. 2. 3. 4. 5. 6. 7. Death of a Salesman: Act II (continued) The boys’ confrontation with Linda, Biff’s final confrontation with Willy, and Willy’s decision to take a late-night drive Summary Biff and Happy return home later that night with a bouquet of roses for Linda. 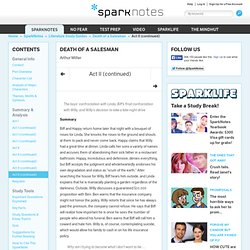 She knocks the roses to the ground and shouts at them to pack and never come back. Happy claims that Willy had a great time at dinner. Linda calls her sons a variety of names and accuses them of abandoning their sick father in a restaurant bathroom. Why am I trying to become what I don’t want to be . . . Biff tells Willy that he is leaving for good and that he will not keep in touch. Analysis Willy’s final confrontation with Biff exposes the essential gridlock of their relationship. During the confrontation, Biff makes no attempt to blame anyone for the course that his life has taken. Willy’s happy reaction to Biff’s frustrated tears demonstrates that Willy has again missed an opportunity to take refuge in the love of his family. Death of a Salesman: Requiem. Summary He’s a man way out there in the blue . . . 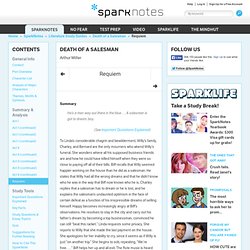 Death of a Salesman. Death of a Salesman: Analysis of Major Characters. Willy Loman Despite his desperate searching through his past, Willy does not achieve the self-realization or self-knowledge typical of the tragic hero. 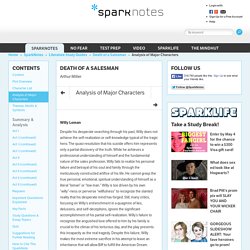 The quasi-resolution that his suicide offers him represents only a partial discovery of the truth. While he achieves a professional understanding of himself and the fundamental nature of the sales profession, Willy fails to realize his personal failure and betrayal of his soul and family through the meticulously constructed artifice of his life.

He cannot grasp the true personal, emotional, spiritual understanding of himself as a literal “loman” or “low man.” Willy is too driven by his own “willy”-ness or perverse “willfulness” to recognize the slanted reality that his desperate mind has forged. Ben’s final mantra—“The jungle is dark, but full of diamonds”—turns Willy’s suicide into a metaphorical moral struggle, a final skewed ambition to realize his full commercial and material capacity. Biff Loman Happy Loman Linda Loman and Charley. Death of a Salesman: Themes, Motifs & Symbols. Themes Themes are the fundamental and often universal ideas explored in a literary work. 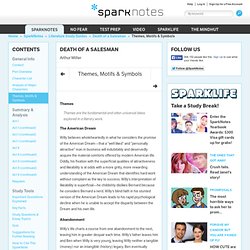 The American Dream Willy believes wholeheartedly in what he considers the promise of the American Dream—that a “well liked” and “personally attractive” man in business will indubitably and deservedly acquire the material comforts offered by modern American life. Oddly, his fixation with the superficial qualities of attractiveness and likeability is at odds with a more gritty, more rewarding understanding of the American Dream that identifies hard work without complaint as the key to success. Willy’s interpretation of likeability is superficial—he childishly dislikes Bernard because he considers Bernard a nerd. Abandonment Willy’s life charts a course from one abandonment to the next, leaving him in greater despair each time.