Sex, Death and the Meaning of Life - Episode Guide. Series 1 Summary Ideas about the soul and the afterlife, of sin and God's purpose have shaped human thinking for thousands of years. 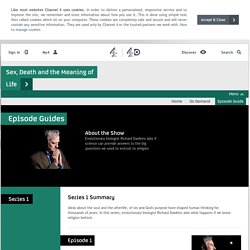 A Medium Talks About Contacting the Dead. NDEaccounts. The HEALING Environment of a Near Death Experience : Natalie Sudman. NATALIE SUDMAN: “Natalie Sudman discusses a ENTIRELY NEW ASPECT of her near death experience after her truck was hit by a roadside bomb in Iraq. 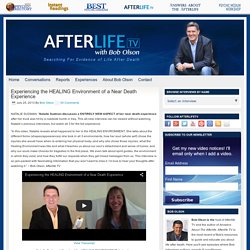 This all-new interview can be viewed without watching Natalie’s previous interviews, but watch all 3 for the full experience. “In this video, Natalie reveals what happened to her in the HEALING ENVIRONMENT. She talks about the different forms (shapes/appearances) she took in all 3 environments, how her soul (whole self) chose the injuries she would have when re-entering her physical body–and why she chose those injuries, what the Healing Environment was like and what it teaches us about our soul’s detachment and sense of humor, and why our souls make choices for tragedies in the first place. We even talk about spirit guides, the environment in which they exist, and how they fulfill our requests when they get mixed messages from us. This interview is so jam-packed with fascinating information that you won’t want to miss it. View Transcript.

'Thoughts read' via brain scans. Scientists say they have been able to monitor people's thoughts via scans of their brains. 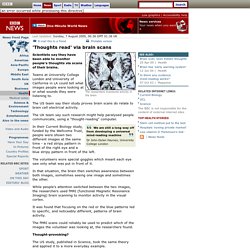 Teams at University College London and University of California in LA could tell what images people were looking at or what sounds they were listening to. The US team say their study proves brain scans do relate to brain cell electrical activity. The UK team say such research might help paralysed people communicate, using a "thought-reading" computer. In their Current Biology study, funded by the Wellcome Trust, people were shown two different images at the same time - a red stripy pattern in front of the right eye and a blue stripy pattern in front of the left.

The volunteers wore special goggles which meant each eye saw only what was put in front of it. In that situation, the brain then switches awareness between both images, sometimes seeing one image and sometimes the other. Richard Dawkins Interview. Interview: Richard Dawkinsby Sheena McDonaldThe Vision Thing, 15 August 1994.Channel 4 (U.K.) 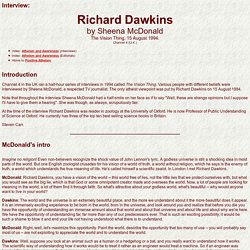 Introduction Channel 4 in the UK ran a half-hour series of interviews in 1994 called The Vision Thing. Various people with different beliefs were interviewed by Sheena McDonald, a respected TV journalist. Parapsychology and Life after Death. Aristotle’s Body/Soul Distinction. Tuesday, January 27, 2009 PrintEmailTweet This! 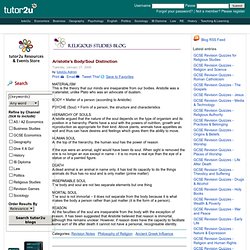 Save to Favorites MATERIALISM This is the theory that our minds are inseparable from our bodies. Aristotle was a materialist, unlike Plato who was an advocate of dualism. BODY = Matter of a person (according to Aristotle) PSYCHE (Soul) = Form of a person, the structure and characteristics HIERARCHY OF SOULS Aristotle argued that the nature of the soul depends on the type of organism and its position in a hierarchy. HUMAN SOUL At the top of the hierarchy, the human soul has the power of reason If the eye were an animal, sight would have been its soul.

DEATH A dead animal is an animal in name only, it has lost its capacity to do the things animals do thus has no soul and is only matter (prime matter) INSEPARABLE SOUL The body and soul are not two separate elements but one thing MORTAL SOUL The soul is not immortal – it does not separate from the body because it is what makes the body a person rather than just matter (it is the form of a person). Plato’s Body/Soul Distinction. Tuesday, January 27, 2009 PrintEmailTweet This! 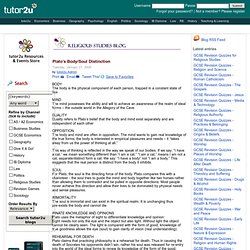