Victorian Period- The House in Mourning. The manner of caring for the dead is growing gradually into a closer imitation of life, and we see the dear ones now lying in that peaceful repose which gives hope to those who view them. 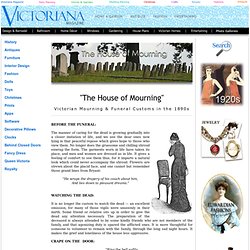 No longer does the gruesome and chilling shroud enwrap the form. The garments worn in life have taken its place, and men and women are dressed as in life. It gives a feeling of comfort to see them thus, for it imparts a natural look which could never accompany the shroud. Flowers are strewn about the placid face, and one cannot but remember those grand lines from Bryant: "He wraps the drapery of his couch about him, And lies down to pleasant dreams. " It is no longer the custom to watch the dead — an excellent omission, for many of those vigils were unseemly in their mirth. "Ring the bell softly, There's crape on the door. " Black crape tied with white ribbon is placed upon the door or bell knob, as an indication that the dread visitor has entered the home, and borne away another prize. 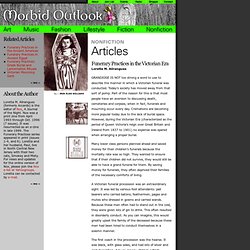 Alirangues Grandiose is not too strong a word to use to describe the manner in which a Victorian funeral was conducted. Today’s society has moved away from that sort of pomp. Part of the reason for this is that most people have an aversion to discussing death, cemeteries and corpses, when in fact, funerals and mourning occur every day. Many lower class persons planned ahead and saved money for their children’s funerals because the mortality rate was so high. 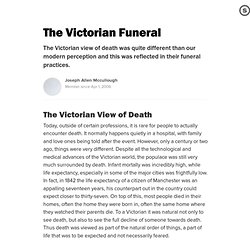 It normally happens quietly in a hospital, with family and love ones being told after the event. However, only a century or two ago, things were very different. Mourning - Victorian Era. Civil War-Era Death and Mourning Customs and Rituals. By Hoag Levins CAMDEN, N.J. -- Death, the topic, descended on the Camden County Historical Society yesterday but it wasn't a morbid or unhappy event. 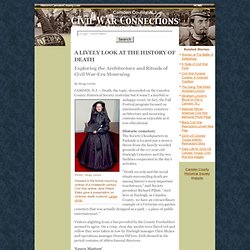 In fact, the Fall Festival program focused on nineteenth-century cemetery architecture and mourning customs was as enjoyable as it was educational. Historic cemetery The Society's headquarters in Parkside is located just a stone's throw from the heavily wooded grounds of the 117-year-old Harleigh Cemetery and the two facilities cooperated in the day's activities. "Death records and the social rituals surrounding death are among history's most important touchstones," said Society president Richard Pillatt.

Visitors alighting from a bus provided by the County Freeholders seemed to agree. 'Grave Matters' The tour through winding roads of temple-like mausoleums, angelic statuary and soaring stone monoliths ended with a bus ride back to the Historical Society's auditorium. In the house you had to cover all the mirrors," she said. Mourner. Post Mortem - Info and Photos of Victorian Funerals. Came across a really cool site this morning called "Post Mortem". 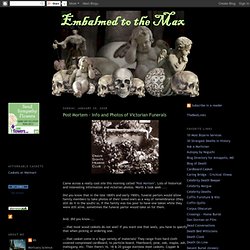 Lots of historical and interesting information and victorian photos. Worth a look seek .... Did you know that in the late 1800's and early 1900's, funeral parlors would allow family members to take photos of their loved one's as a way of remembrance (they still do it in the south) or, if the family was too poor to have one taken while they were still alive, sometimes the funeral parlor would take on for them. And, did you know.... ...that most wood caskets do not seal? ...that casket come in a huge variety of materials? Victorian Mourning and Sentimental Jewelry. In 1850, Thomas Andrews became the jet ornament maker to Queen Victoria, and in 1851 the first jewelry made of jet went on exhibit and the business of making jewelry from jet had begun. Not long after, it was being exported to Bavaria and France. Demand for jet jewelry reached a peak in 1861, triggered by the death of Prince Albert. By 1870, 1500 well paid employees were engaged in the craft of working jet into beautiful jewelry and other objects, even caskets are exhibited at St.

Thomas’s Museum, and a clock case shown at the Museum of Archeology and Bygones in Scarborough, England. The boom was short-lived however, and by 1921 there were 40 workers of Whitby jet remaining. In 1887, 22 years after the death of Prince Albert, Queen Victoria finally agreed to wear silver jewelry on state occasions, and allowed a lightening up on the rules of mourning that had dictated jewelry fashions for so long. To learn more about mourning jewelry, continue your search here........