The History of Capital Punishment in the United States. Capital punishment’s history in the United States is basically a debate between two ways of viewing the world: that state-sanctioned death is necessary for society, and that a civilized society should not see death as the only fair way to punish any crime or criminal. 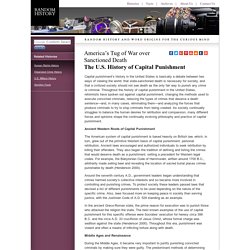 Throughout the history of capital punishment in the United States, reformists have spoken out against capital punishment, changing the methods used to execute convicted criminals, reducing the types of crimes that deserve a death sentence—and, in many cases, eliminating them—and analyzing the forces that produce criminals to try to stop criminals from being created. As society continually struggles to balance the human desires for retribution and compassion, many different forces and opinions shape the continually evolving philosophy and practice of capital punishment. Ancient Western Roots of Capital Punishment Middle Ages and Renaissance As civil and criminal law developed, torture was phased out, but very, very slowly. Arguments. FactSheet. American Civil Liberties-Taylor. The Case Against the Death Penalty. Ethics - Capital punishment: Arguments against capital punishment. Readings - History Of The Death Penalty.

As far back as the Ancient Laws of China, the death penalty has been established as a punishment for crimes. 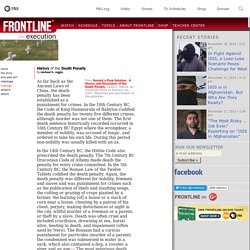 In the 18th Century BC, the Code of King Hammurabi of Babylon codified the death penalty for twenty five different crimes, although murder was not one of them. The first death sentence historically recorded occurred in 16th Century BC Egypt where the wrongdoer, a member of nobility, was accused of magic, and ordered to take his own life. During this period non-nobility was usually killed with an ax. In the 14th Century BC, the Hittite Code also prescribed the death penalty. The 7th Century BC Draconian Code of Athens made death the penalty for every crime committed. Mosaic Law codified many capital crimes. Britain influenced the colonies more than any other country and has a long history of punishment by death. In Britain, the number of capital offenses continually increased until the 1700's when two hundred and twenty-two crimes were punishable by death.

Wilkerson v. Weems v. Law Enforcement Views on Deterrence. The graph to the right shows the results of a 2008 poll of 500 police chiefs in the United States, conducted by R.T. 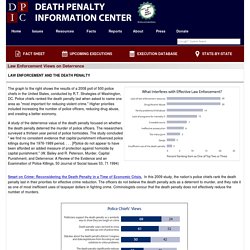 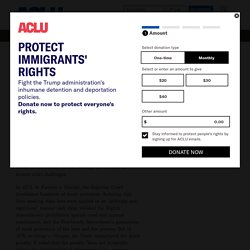 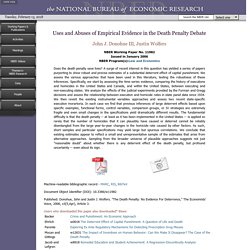 A surge of recent interest in this question has yielded a series of papers purporting to show robust and precise estimates of a substantial deterrent effect of capital punishment. We assess the various approaches that have been used in this literature, testing the robustness of these inferences. Specifically, we start by assessing the time series evidence, comparing the history of executions and homicides in the United States and Canada, and within the United States, between executing and non-executing states.

We analyze the effects of the judicial experiments provided by the Furman and Gregg decisions and assess the relationship between execution and homicide rates in state panel data since 1934. Machine-readable bibliographic record - MARC, RIS, BibTeX Document Object Identifier (DOI): 10.3386/w11982 Published: Donohue, John and Justin J.