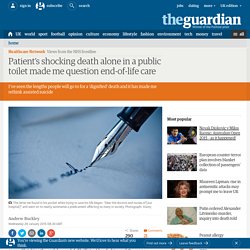 Clutching the grab bag and defibrillator I headed toward the scene, considering what we were likely to find. There’s an unwritten rule of cardiac arrest: if it’s in a public place, it’s always a syncopal episode, a faint. A number of responders had arrived before me at the cramped and panicked toilet area and started the well-trodden resuscitation path, delivering CPR to an elderly man we’ll call John. John had not fainted. Evidence of rigor mortis, the stiffening that sets in when the muscles stop receiving oxygen, was already manifest, and his face showed the calm, waxen permanence of death we hospital doctors become so familiar with. The defibrillator, a machine that allows for rapid assessment of the heart, confirmed the complete absence of electrical activity. Deciding to end life. The tell-tale fly. We still know very little about the insect species that colonise a cadaver. 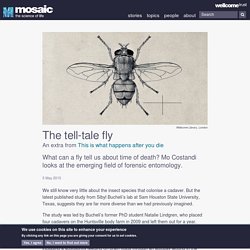 But the latest published study from Sibyl Bucheli’s lab at Sam Houston State University, Texas, suggests they are far more diverse than we had previously imagined. The study was led by Bucheli’s former PhD student Natalie Lindgren, who placed four cadavers on the Huntsville body farm in 2009 and left them out for a year. During that time, she returned four times a day to collect the insects that she found on the cadavers. What is a ‘natural’ burial? Reduce, reuse, recycle: a common mantra we hear often and usually apply to the waste we create. 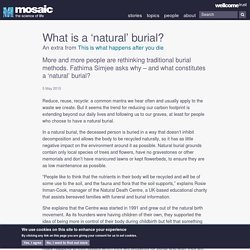 But it seems the trend for reducing our carbon footprint is extending beyond our daily lives and following us to our graves, at least for people who choose to have a natural burial. In a natural burial, the deceased person is buried in a way that doesn’t inhibit decomposition and allows the body to be recycled naturally, so it has as little negative impact on the environment around it as possible. Natural burial grounds contain only local species of trees and flowers, have no gravestones or other memorials and don’t have manicured lawns or kept flowerbeds, to ensure they are as low maintenance as possible. How nature can mummify a brain. Brain tissue is very soft and full of water, and through autolysis it usually begins to decompose rapidly after death. 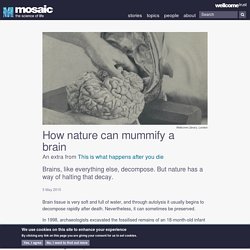 Nevertheless, it can sometimes be preserved. This is what happens after you die. “It might take a little bit of force to break this up,” says mortician Holly Williams, lifting John’s arm and gently bending it at the fingers, elbow and wrist. 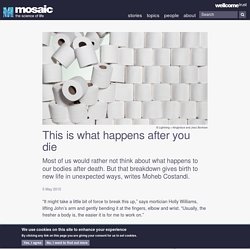 “Usually, the fresher a body is, the easier it is for me to work on.” Williams speaks softly and has a happy-go-lucky demeanour that belies the nature of her work. Raised and now employed at a family-run funeral home in north Texas, she has seen and handled dead bodies on an almost daily basis since childhood. Now 28 years old, she estimates that she has worked on something like 1,000 bodies. The smell of death. Dead bodies give off a distinctive, sickly-sweet odour that’s immediately recognisable and hard to forget. 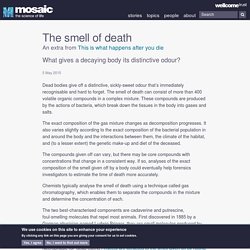 Scientist reveals how smell of death creates a heady mixture of scents. Smell of death can consist of more than 400 volatile organic compoundsScientists say there may be core smells with concentrations that changeIf this is the case, it could help scientists better estimate time of deathNecrophagic - or 'dead-eating' - insects are attracted to the smell and may also help researchers identify new core compounds By Moheb Costandi Published: 22:17 GMT, 6 May 2015 | Updated: 22:30 GMT, 6 May 2015. 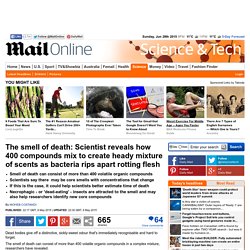 Death, Dying,& the Digital: Changing Views & Creating Community. Most doctors who were terminally ill would AVOID aggressive treatment. 88% of doctors would choose 'do not resuscitate' orders for themselvesHowever, most pursue aggressive, life-prolonging treatments for patientsThis could be because the medical system rewards doctors for taking actionThe researchers say there is a 'tipping point' where the high-intensity treatment becomes more of a burden than the disease itself By Emma Innes Published: 10:34 GMT, 30 May 2014 | Updated: 12:36 GMT, 30 May 2014 Most doctors would turn down aggressive treatment if they were terminally ill, new research has found. 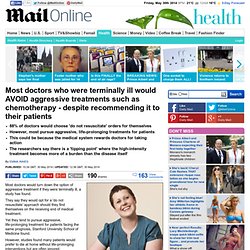 Dr Kate Granger (pictured), who has terminal cancer, has talked about choosing to stop having chemotherapy Most doctors would turn down the option of aggressive treatment if they were terminally ill, a study has found. Welcome to Death Cafe. Changes to a Body after Death. There are a number of changes to a person’s body which occur after death. 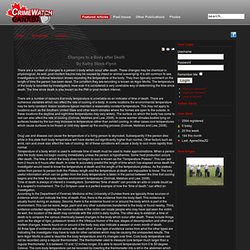 These changes may be chemical or physiological. As well, post-mortem trauma may be caused by insect or animal scavenging. It is still common to see investigators on fictional television shows recording the temperature of the body. The Physics of Death. The 5 Stages of Embalming. Health. 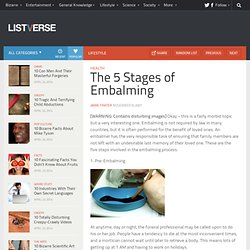 The Rate of Decay in a Corpse. Author: Jack Claridge - Updated: 18 April 2014| Comment The rate of decay within the human body after death is normally split into two distinct categories. Death & Decomposition in Space. *NOTE* This article does not contain images that may be disturbing to some individuals. It does, however, contain information that might be. Many of the attached links contain VERY graphic images. The Physics of Death: Credit: depositphotos Even though it’s an inexorable part of life, for many people, death—or at least the thought of ceasing to exist forever—can be a scary thing. I mean, the disturbing things that happen to the body during decomposition—the point in which cells and tissues begin to break down post mortem—are bad enough. Instead of looking at death from a biological perspective, what happens from a physics standpoint?

More specifically, how is our energy redistributed when we die? In life, the human body is comprised of both matter and energy—including energy of the electrical and chemical varieties. The process is much more complex with humans. As we know through thermodynamics, energy can not be created nor destroyed.. it can simply change states. Here’s What Happened to Jack Because Rose Didn’t Save Him. Looking death in the face: The amazing exhibition of over 300 items showing mortality across the globe. By Mark Prigg Published: 16:14 GMT, 14 November 2012 | Updated: 07:49 GMT, 15 November 2012 Try as we might, there's no escaping death. Art collector Richard Harris has decided to embrace it instead - and wants the rest of us to do the same.

Death. Cookies on the New Scientist website. Victorian death. At some point your luck will run out. So embrace pleasure all the more keenly before the grave beckons. Welcome to Death Week! The Meaning of Death: How do we know someone is no longer alive? So you want to hang your skeleton in public? Here's how. Bodyworlds. LifeGem - Memorial Diamonds created from a lock of hair or cremated remains / ashes / cremation.

Down on the Body Farm: Inside the Dirty World of Forensic Science - Monica Raymunt. Sometime soon, dead bodies will be scattered around John O'Laughlin's land. Tennessee's Farm of Rotting Corpses - Motherboard - VICE.