After the rain. Apr 20, 2013 after the rain by aya kishi from japan designer's own words: the short listed entry by japanese design aya kishi re-interprets the meaning of a memorial in 'after the rain' by incorporating a series of optical prisms into the centres of tombstones, which as a result, create a spectrum of light on the ground where the grave would be situated. influenced by rainy days and the grieving process, the project takes these elements and translates them into a visual intervention, helping ease the pain and suffering after losing a loved one. 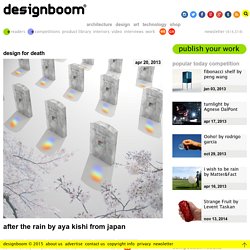 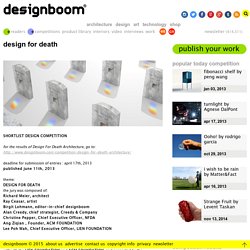 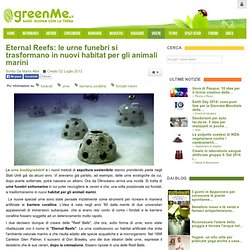 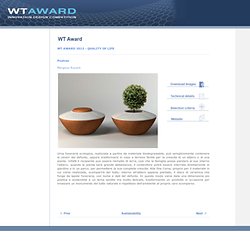 Bio urn. You don't find many designers working in the funeral business thinking about more creative ways for you to leave this world (and maybe they should be). However, the product designer Gerard Moline has combined the romantic notion of life after death with an eco solution to the dirty business of the actual, you know, transition. His Bios Urn is a biodegradable urn made from coconut shell, compacted peat and cellulose and inside it contains the seed of a tree.

Once your remains have been placed into the urn, it can be planted and then the seed germinates and begins to grow. You even have the choice to pick the type of plant you would like to become, depending on what kind of planting space you prefer. I, personally, would much rather leave behind a tree than a tombstone. Related Content If You Liked the 'Bios Urn,' You'll Love 'The Spirit Tree' Similar Projects « Digital Decedent. Garments for the Dead Stay Close to Nature. EmailEmail Forget the eco-friendly dresses or brands we always recommend to you. 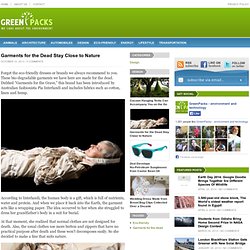 These bio-degradable garments we have here are made for the dead. Dubbed “Garments for the Grave,” this brand has been introduced by Australian fashionista Pia Interlandi and includes fabrics such as cotton, linen and hemp. According to Interlandi, the human body is a gift, which is full of nutrients, water and protein. And when we place it back into the Earth, the garment acts like a wrapping paper.

At that moment, she realized that normal clothes are not designed for death. While creating this eco-friendly grave dress, she focused on creating a garment that literally and symbolically returns to the earth. Auger Afterlife - The Daily Undertaker. Once again, the work of an artist challenges us to examine our relationship with death and the afterlife. 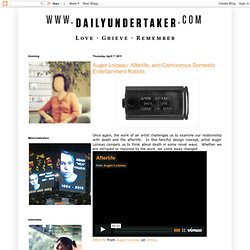 In this fanciful design concept, artist Auger Loizeau compels us to think about death in some novel ways. Whether we are intriqued or repulsed by the work, we come away changed. Afterlife from Auger-Loizeau on Vimeo. "Many religions have their own notions of what the Afterlife or an existence after death may be, making death less final or daunting. However, as our lives become increasingly defined by technological interventions and scientific validation our increasing faith in technology has led to a decreased belief in organized religion.

In this next design, Loizeau challenges our complicit role in creating entertainment out of death. Carnivorous Domestic Entertainment Robots from Auger-Loizeau on Vimeo. Afterlife. Shelves for Life « William Warren. Joe Scanlan. Joe Scanlan DIY, or How To Kill Yourself Anywhere in the World for Under $399 Ghent, Belgium: Imschoot Uitgevers, 2002 112 pp., 21 x 15 cm., softcover Edition of 1000, special signed and numbered edition of 30. 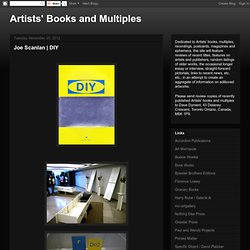 Produced in the style of an IKEA instruction manual (with minimal text and mechanical drawings), Scanlan's title provides the reader with all the information required to produce a functional coffin from existing Ikea furniture. The book also features a cameo by AnnLee, a Japanese manga character that artist Pierre Huyghe purchased and 'liberated'.