A New Vision for Dreams of the Dying. Photo One evening in the late fall, Lucien Majors, 84, sat at his kitchen table, his wife Jan by his side, as he described a recent dream. 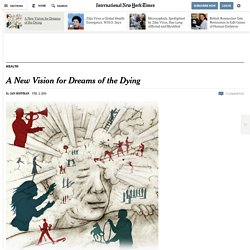 Mr. Majors had end-stage bladder cancer and was in renal failure. As he spoke with a doctor from Hospice Buffalo , he was alert but faltering. In the dream, he said, he was in his car with his great pal, Carmen. “We’re driving down Clinton Street,” said Mr. “We were looking for the Grand Canyon.” Mr. “Why do you think your boys were in the car?” “My sons are the greatest accomplishment of my life,” Mr.

He died three weeks later. For thousands of years, the dreams and visions of the dying have captivated cultures, which imbued them with sacred import. Even the law reveres a dying person’s final words, allowing them to be admitted as evidence in an unusual exception to hearsay rules. In the modern medical world, such experiences have been noted by psychologists, social workers and nurses. Now a team of clinicians and researchers led by Dr. Www.cme.utoronto.ca/endoflife/Slides/PPT Indigenous Perspectives.pdf. Amitabha Buddha. Phowa Practice.

Practice One -Wherever the word "person" is written, insert the word "animal" if you are doing this for an animal. 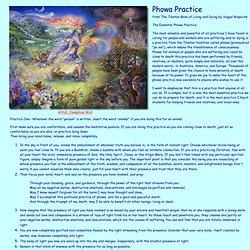 First make sure you are comfortable, and assume the meditative posture. If you are doing this practice as you are coming close to death, just sit as comfortably as you are able, or practice lying down. Then bring your mind home, release, and relax completely. In the sky in front of you, invoke the embodiment of whatever truth you believe in, in the form of radiant light. Choose whichever divine being or saint you feel close to. Practice Two To do this practice even more simply, begin as before by resting quietly, and then invoke the presence of the embodiment of truth. 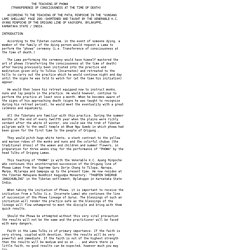 AYANG RINPOCHE OF THE DRIGUNG LINE OF KAGYUDPA, BYLAKUPPE, KARNATAKA STATE / INDIA. INTRODUCTION According to the Tibetan custom, in the event of someone dying, a member of the family of the dying person would request a Lama to perform the "phowa" ceremony (i.e. Www.drikungseattle.com/uploads/1/0/4/3/10434607/dewachen_wishing_prayer_karma_chagme_r_booklet-2.pdf. Awaken Your Psychic Powers.

Longevity. Digital assets: How do you handle a loved one’s online accounts? Screenshot courtesy of Facebook Your mother has just entered hospice care, and she is declining quickly. 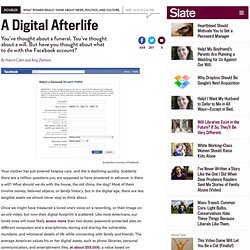 Suddenly there are a million questions you are supposed to have answered in advance: Is there a will? What should we do with the house, the old china, the dog? Most of them involve money, beloved objects, or family history, but in the digital age, there are less tangible assets we almost never stop to think about. When Cara, 22, graduated from college, she returned home to spend the summer with her mother.

Having all log-ins and passwords for bill payment and other financial accounts in one secure place would have helped Cara, especially in a time when she was already emotionally and physically exhausted—and too late to ask her mother about anything. If you ask five Internet security experts to list their favorite way to store passwords, you’re likely to come up with more than five answers. Judy and her father were always close personally and professionally.