Reinforcement and Punishment on Teenagers: A Guide for Parents

This collection aims to clarify what reinforcement and punishment are to parents and how they can use this information to impact the behaviour of their teenage children.

Reinforcements are a condition that occurs after a response which then strengthens it (Zimbardo et al., 2017).

They act on the behaviour which can be directly measured (Winn, 2001). A positive reinforcement is displayed after a response which gave a positive outcome that increases the likelihood of the response possibly happening again (Zimbardo et al., 2017). A negative reinforcement however is the elimination of an unpleasant stimulus dependent on behaviour (Zimbardo et al., 2017), an example of this are punishments.

Research has shown that adolescents focus well on positive incentives (Palminteri et al., 2016) but it is recommended that rewards must be occasional for children to not think they have to do something to be rewarded (Carroll, 2016). Research has also shown that the outcome of most punishments encourages fear and resentment and it makes teens unwilling to confess their mistakes (Somers, 2015). Consequences may then be used to educate teens to learn from their mistakes. They reassure good behavior and teach teens to involve in more proactive problem solving (Somers, 2015). 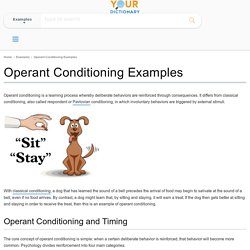 B.F. Skinner began with Thorndike's law of effect, which states that behaviors that cause satisfactory results will be repeated. Skinner considered satisfaction to be insufficiently specific to measure, and set out to design a means of measuring learned behaviors. The operant conditioning chamber, popularly known as a Skinner box, was his solution. He kept his test subjects, primarily pigeons and rats, in circumstances that allowed him to closely observe their behavior. Skinner's work took that first principle and applied it to human behavior, representing the school of psychology called behaviorism. 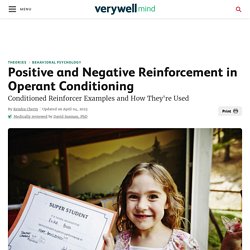 The type of reinforcement used can play an important role in how quickly a behavior is learned and the overall strength of the resulting response. Understanding Reinforcement Reinforcement is a term used in operant conditioning to refer to anything that increases the likelihood that a response will occur. Psychologist B.F. Skinner is considered the father of this theory. For example, reinforcement might involve presenting praise (the reinforcer) immediately after a child puts away her toys (the response). What Is Reinforcement? Psychology, Definition, And Applications. By: Toni Hoy Updated February 11, 2021 Medically Reviewed By: Whitney White, MS. 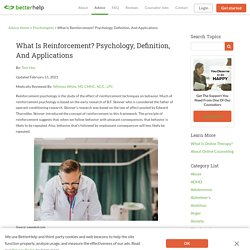 In operant conditioning, positive and negative do not mean good and bad. Instead, positive means you are adding something, and negative means you are taking something away. Skinner’s Operant Conditioning: Rewards & Punishments. Reinforcement Theory Explained With Examples. What is positive reinforcement? Examples of Positive Reinforcement. Whether you deal with young children at home or in the classroom, or you want to be a better manager of adults in the workplace, educational psychologists have studied ways to influence people to get the results you want. 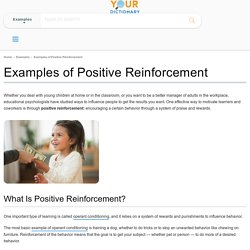 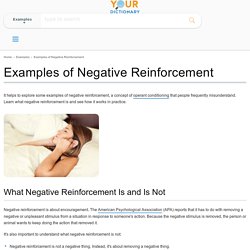 Learn what negative reinforcement is and see how it works in practice. What Negative Reinforcement Is and Is Not Negative reinforcement is about encouragement. The American Psychological Association (APA) reports that it has to do with removing a negative or unpleasant stimulus from a situation in response to someone's action. Because the negative stimulus is removed, the person or animal wants to keep doing the action that removed it. What is punishment? The Study of Punishment in Psychology. Punishment is a term used in operant conditioning to refer to any change that occurs after a behavior that reduces the likelihood that that behavior will occur again in the future.

While positive and negative reinforcements are used to increase behaviors, punishment is focused on reducing or eliminating unwanted behaviors. Punishment is often mistakenly confused with negative reinforcement. The difference: Reinforcement increases the chances that a behavior will occur and punishment decreases the chances that a behavior will occur. Types of Punishment Behaviorist B. What Is Punishment Psychology, And Should You Use It? Updated February 01, 2021 Medically Reviewed By: Tanya Harell Source: rawpixel.com We were all punished when we were younger at one time or another. 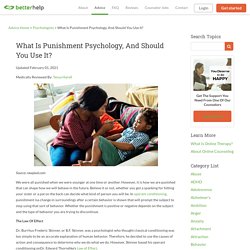 However, it is how we are punished that can shape how we will behave in the future. Believe it or not, whether you got a spanking for hitting your sister or a pat on the back can decide what kind of person you will be. The Law Of Effect. Does Punishment Work? Reinforcement & Punishment. What is positive punishment? Real-Life Examples of Positive Punishment. “Positive” and “punishment” seem like two words that you wouldn’t use together. 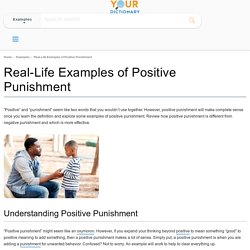 That is the main concept behind negative punishment. Using negative punishment example scenarios, gain an understanding of the concept and its effectiveness. Negative Effects of Positive Reinforcement. Parenting A Teen Through Positive Reinforcement - Back On Track. Most parents can agree: the teenage years can be rough! Hormones are raging, they are trying to gain more independence, and they spend a lot of time away from their parents and their home while hanging with friends.

One minute they love and adore you, the next minute you ruined their life. How to Reward Your Teen for Good Behavior. Teenagers are young adults who are trying to learn the ways of the world. When they do something great at school or at home or simply make a healthy decision, parents can give them a reward. The reward does not have to be money, but it is a nice way to say "thank you" or "I'm proud of you. " Positive Reinforcement for Adolescents. By the time children have reached adolescence, their responses are often ingrained, but parental actions can still positively affect adolescent behavior. Since adolescents are struggling to develop their personal identity and are concerned about their body image, parental support is crucial to help positively frame experiences as learning opportunities.

Positive reinforcement remains a powerful teaching tool during these formative years, and we encourage parents to take time to contemplate the ways they can help adolescents mature and become self-reliant. Reinforce mature decisions by allowing increased privileges when adolescent demonstrates increased responsibility. Parenting Children with Positive Reinforcement (Examples + Charts) Children don’t come with instructions and discipline is often experienced by parents and children alike as an arena where our will and wits are tested. Positive reinforcement is only one of many forms of discipline, but from the perspective of positive psychology, it may as well be the most important one as it focuses on amplifying what is already good in our children and in ourselves as their caretakers.

Positive reinforcement as a form of positive discipline allows us to tap into our children’s individual strengths, draw attention to their personality traits and interests, and as a result give us an opportunity to connect, communicate effectively, and ultimately empower them to be more of themselves. Before you read on, we thought you might like to download our 3 Positive Psychology Exercises for free. You can download the free PDF here.

BYU Study: a need for positive reinforcement among teens. There are countless publications describing the best ways to raise a child in the hopes of them becoming successful adults. Between the books, magazines and video tutorials, parents may be finding themselves overwhelmed on more than one occasion. But a group of researchers at Brigham Young University have found the answer to helping children through life may be less complicated than it seems. The BYU study found bad behavior can be discouraged among children by simply encouraging good behavior. The study, Flourishing During the Teen Years: Why “Not Being Bad” Isn’t Good Enough, used information from a 10-year project that followed 500 families in order to see where the individuals struggled and what actions helped them become successful.

Many parents tell me that nothing seems to work, and that coming up with the right thing for their child can seem like an impossible task. If you’re the parent of an adolescent, you may have grounded your child, taken away their video games, or suspended their driving privileges for months on end. But as James Lehman says, you can’t punish kids into acceptable behavior—it just doesn’t work that way. What's The Difference Between Positive and Negative Punishment? - North Shore Pediatric Therapy. New perspectives on adolescent motivated behavior: Attention and conditioning. Ways to effectively apply punishment. How to Use Positive Reinforcement to Improve Your Child's Behavior.

When your child misbehaves, rewards might be the last thing on your mind. But, positive reinforcement can be one of the most effective behavior modification techniques.1 You can use positive reinforcement to encourage prosocial behaviors, like sharing or following directions. Be Positive And Praise Children. The Use of Reinforcement and Punishment in Shaping a Child's Behavior. Developmental Psychology at Vanderbilt. Jacob Lee and Matthew Snodgress There is no one individual who influences the development of a child more than the parent. Every aspect of the child’s progression through life, beginning with their genetic makeup, is greatly influenced, if not completely determined by, the parent figure in the child’s life.

Parent figures choose the climate which the child will grow up in. Whether that is in regard to family dynamics, intellectual stimulation, or social development. One way parents dictate the development of their child is through discipline. Some methods may effectively keep a child “in line,” but they could be harmful in the long term. Form of classical conditioning. However, dangers do not only lie in extreme approaches to parenting such as the one described above.

Strategies for effective learning. Effects of Corporal Punishment on Teenagers - Onlymyhealth.com. When caning can turn into outright child abuse, Singapore News. Recently, a video of a couple hitting their daughter publicly in Jurong West with a cane and a tree branch went viral, prompting the mother to write to the media to apologise for her action. She said her daughter had lied to her about homework and she "just exploded" as she could not believe that she had raised a liar. The video, posted two months ago, sparked a debate on whether caning is the best way to discipline children. Though caning is not so common here nowadays, it is still practised. Too much of punishment has its own problems: Corporal punishment archaic, does more harm than good, Letters in Print News. I was surprised to read that 80 per cent of parents in Singapore still carry out corporal punishment and that schools are allowed to carry it out on male children, given the well-documented scientific evidence and studies on the detrimental effects and ineffectiveness of corporal punishment on children (Most parents here don't spare rod on kids at home: Study, July 30).

In an updated policy statement on corporal punishment in November last year, the American Academy of Paediatrics noted mounting evidence that supported its call to ban physical discipline. TODAY.