How to Use Positive Reinforcement to Improve Your Child's Behavior 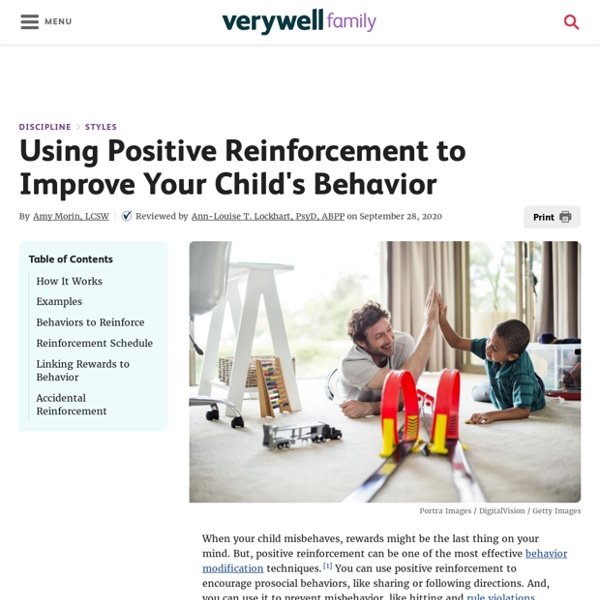 Developmental Psychology at Vanderbilt Jacob Lee and Matthew Snodgress There is no one individual who influences the development of a child more than the parent. Every aspect of the child’s progression through life, beginning with their genetic makeup, is greatly influenced, if not completely determined by, the parent figure in the child’s life. Parent figures choose the climate which the child will grow up in. Whether that is in regard to family dynamics, intellectual stimulation, or social development.

Negative Reinforcement and Operant Conditioning Negative reinforcement is a term described by B. F. Skinner in his theory of operant conditioning. In negative reinforcement, a response or behavior is strengthened by stopping, removing, or avoiding a negative outcome or aversive stimulus.1 Overview Positive vs Negative Punishment - Psychestudy Punishment is a fundamental concept of Operant Conditioning, whose major objective is to decrease the rate of certain undesired behavior from occurring again. Punishment can be further classified into two major parts These two different types of punishment have got both similarities and differences, as the major purpose of both these punishment types is to decrease the rate of certain undesired behavior. By introducing the concept of punishment to an individual, the individual gets the idea that what he/she is doing, is wrong.

The value of reinforcing positive behaviour for our teens As children approach adolescence, they sometimes begin testing limits, bending the rules and otherwise going against the grain. While this is normal behaviour for teens, it can be incredibly trying for you, as a parent. Teenagers may also be dealing with the stresses that come with trying to fit in with their peers and assert their growing independence. Effective Consequences for Teenagers If you’re having trouble giving effective consequences to your teen, know that you are not alone. Many parents tell me that nothing seems to work, and that coming up with the right thing for their child can seem like an impossible task. If you’re the parent of an adolescent, you may have grounded your child, taken away their video games, or suspended their driving privileges for months on end. But as James Lehman says, you can’t punish kids into acceptable behavior—it just doesn’t work that way. “You can’t punish kids into acceptable behavior.”

Positive Punishment: What It Is, Benefits, and Examples Positive punishment is a form of behavior modification. In this case, the word “positive” doesn’t refer to something pleasant. Positive punishment is adding something to the mix that will result in an unpleasant consequence. The goal is to decrease the likelihood that the unwanted behavior will happen again in the future.

1) From this article, it can be seen that using a positive reinforcement will ensure that the child is much more motivated to do the behaviour much more often. However, for this to work much more effectively, parents need to make sure that reinforcement is given on a consistent basis. In addition, it is also important to watch out so that parents do not accidently reinforce negative behaviour. by fareeshahdawoodepeer Sep 24