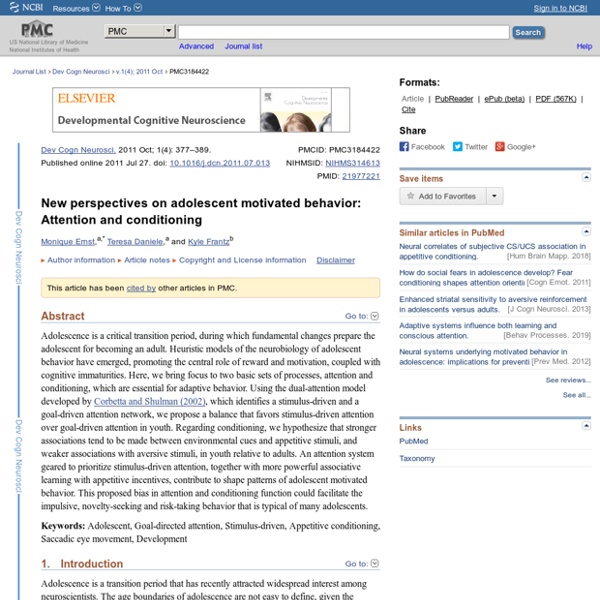 Effective Consequences for Teenagers If you’re having trouble giving effective consequences to your teen, know that you are not alone. Many parents tell me that nothing seems to work, and that coming up with the right thing for their child can seem like an impossible task. If you’re the parent of an adolescent, you may have grounded your child, taken away their video games, or suspended their driving privileges for months on end. How to Get Your Desired Behaviour Using Operant Conditioning There are two types of reinforcement: positive and negative. You may have had moments where one of these forms of reinforcement worked well for you, while another stirred up feelings of shame or resentment. Have you ever rewarded a child with candy for good behavior? That is an example of positive reinforcement. Different reinforcement methods will lead to different experiences and behavior. “If you want a different result you have to choose a different behaviour.” – Dr.

How to Use Positive Reinforcement to Improve Your Child's Behavior When your child misbehaves, rewards might be the last thing on your mind. But, positive reinforcement can be one of the most effective behavior modification techniques.1 You can use positive reinforcement to encourage prosocial behaviors, like sharing or following directions. And, you can use it to prevent misbehavior, like hitting and rule violations. The value of reinforcing positive behaviour for our teens As children approach adolescence, they sometimes begin testing limits, bending the rules and otherwise going against the grain. While this is normal behaviour for teens, it can be incredibly trying for you, as a parent. Teenagers may also be dealing with the stresses that come with trying to fit in with their peers and assert their growing independence. However, at the same time, they are looking for validation from the adults around them. It's crucial, therefore, for parents and teachers to provide as much guidance and positive reinforcement as possible, rather than simply tightening the rules.

Developmental Psychology at Vanderbilt Jacob Lee and Matthew Snodgress There is no one individual who influences the development of a child more than the parent. Every aspect of the child’s progression through life, beginning with their genetic makeup, is greatly influenced, if not completely determined by, the parent figure in the child’s life. How to Reward Your Teen for Good Behavior Teenagers are young adults who are trying to learn the ways of the world. When they do something great at school or at home or simply make a healthy decision, parents can give them a reward. The reward does not have to be money, but it is a nice way to say "thank you" or "I'm proud of you." Teens need this positive reinforcement because it shows them that they are on the right track.1 It is also a good life lesson that you can pass on: good things happen to good people. When Do Teenagers Deserve a Reward?

4 Proven Behavior Modification Techniques with Examples Behavior modification is a means of changing behavior through various techniques used to replace undesirable behaviors with desirable ones. Behavior modification techniques have been used to treat both adults and children for various problems, such as enuresis (bedwetting), separation and general anxiety, various phobias, obsessive-compulsive disorder (OCD), etc. The methods use vary, but usually involve some form of positive or negative reinforcement. This concept had its beginning in 1938, when B.

How to Deal With a Disrespectful Teenager: 10 Tips for Frustrated Parents Are you dealing with a disrespectful teenager? Maybe he mutters under his breath when you ask him to do his homework. Or maybe she slams her room door when you tell her that she can’t go out with her friends. Behavior Modification to Help Your Child Behavior modification is defined as "the alteration of behavioral patterns through the use of such learning techniques as biofeedback and positive or negative reinforcement." More simply, you can modify your child's behavior with positive consequences and negative consequences. Behavior modification is based on the idea that good behavior should lead to positive consequences and bad behavior should lead to negative consequences. This approach is often used to discipline kids with ADHD, autism, or oppositional defiant disorder. However, it can be effective for all kids.1

Teen Bad Behavior & Discipline Plans - Promoting Healthy Growth Ages 15 - 18 Bad behavior doesn't end when your child graduates from diapers -- or even from middle school. In fact, the teen years can bring some of the toughest discipline challenges parents have to face. Sulking, arguing, lying, and rebelling are just a few of the ways teens misbehave. There's a good explanation for these bad behaviors. Positive Reinforcement in Teenagers Teenagers might need special incentives to learn skills, develop responsibility and make positive decisions about their conduct. One effective way to encourage the behaviors you want is to use the behavior management technique of positive reinforcement. Through positive reinforcement, you gradually make it more likely that your teenager will demonstrate the desired behaviors.