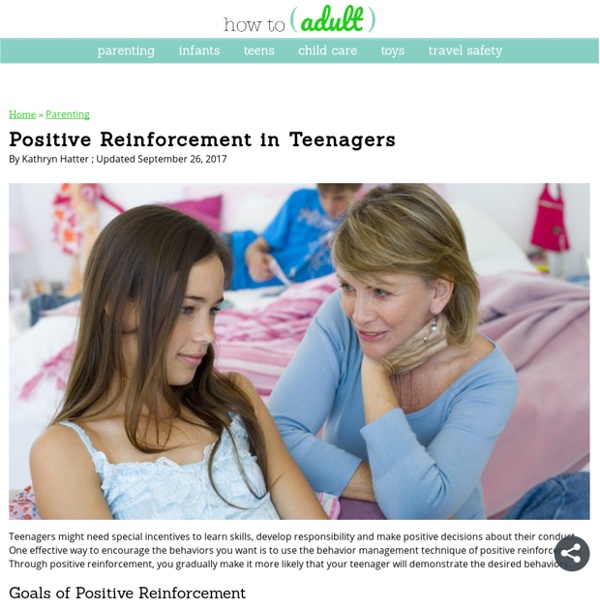 Parenting Teens: When It Comes To Learning, Positive Reinforcement Trumps Punishment Teens generally aren’t afraid to defy authority. Generations of parents know this, having tried different strategies for getting their adolescents to do what they ask — often in attempts to keep them safe and help pave a path toward success. Now, a new study shows that rewards, rather than punishments, could be the way to get them to cooperate. Researchers at the University College London asked 18 volunteers aged 12 to 17 and 20 volunteers aged 18 to 32 to complete both a learning task and post-learning task in which they chose between abstract symbols, each associated with a fixed chance of reward, punishment, or no outcome. As the trial progressed, participants learned which symbols were likely to lead to each result and adjusted their choices accordingly.

Developmental Psychology at Vanderbilt Jacob Lee and Matthew Snodgress There is no one individual who influences the development of a child more than the parent. Every aspect of the child’s progression through life, beginning with their genetic makeup, is greatly influenced, if not completely determined by, the parent figure in the child’s life. Parent figures choose the climate which the child will grow up in.

When Should You Take the Phone Away from a Teenager? Kate Gosselin, the mom in the reality series Kate Plus 8, isn’t exactly someone we’d turn to for inspirational parenting. But she recently said something on a television special that caught our attention. Speaking of her two 13-year-old daughters, she tells the camera: “I got those girls cell phones and iPads so that I could take them away.” Gosselin makes the move sound especially manipulative, but in fact taking away “screen time,” or access to electronic devices, has become a parent’s go-to consequence for unacceptable behavior at practically every age, from toddlers to teens. And if you’re talking about teens, there’s an added dimension. As Gosselin puts it rather crudely, “You get their attention because you cut them off from their friends.”

Effective Vs. Counterproductive Methods Of Teen Punishment Updated September 17, 2018 Reviewer Tiffany Howard, LPC, LCADC Source: pinterest.com In the current day and age, parental knowledge regarding effective and counterproductive methods of setting limits and consequences for their teens is paramount. However, a clear understanding is often easier said than obtained. Teenagers are infamous for unruliness and difficulty, thus breeding stress for parents who have countless other responsibilities aside from their children..

When caning can turn into outright child abuse, Singapore News Recently, a video of a couple hitting their daughter publicly in Jurong West with a cane and a tree branch went viral, prompting the mother to write to the media to apologise for her action. She said her daughter had lied to her about homework and she "just exploded" as she could not believe that she had raised a liar. The video, posted two months ago, sparked a debate on whether caning is the best way to discipline children. Though caning is not so common here nowadays, it is still practised. And experts warn that corporal punishment can have a lasting psychological impact on the child. Caning is used to instil fear in a child, thereby prompting obedience.

Punishment Rules for Difficult Teenagers Teenagers are notoriously hard to deal with, especially when it comes to responsibility and discipline. Walking the fine line between childhood and adulthood, most teens struggle to assert their own free will, resulting in rebellion against their parents. The best way to think of punishment rules for difficult teenagers is to first set the ground rules with your teen and point out the consequences, so your teens know beforehand what type of offense will merit certain undesirable consequences.

An important point brought up in this article is to observe the things that the teenager is incline to use or do and use them as a reward to reinforce desirable behaviour. by lawrenztan Sep 24