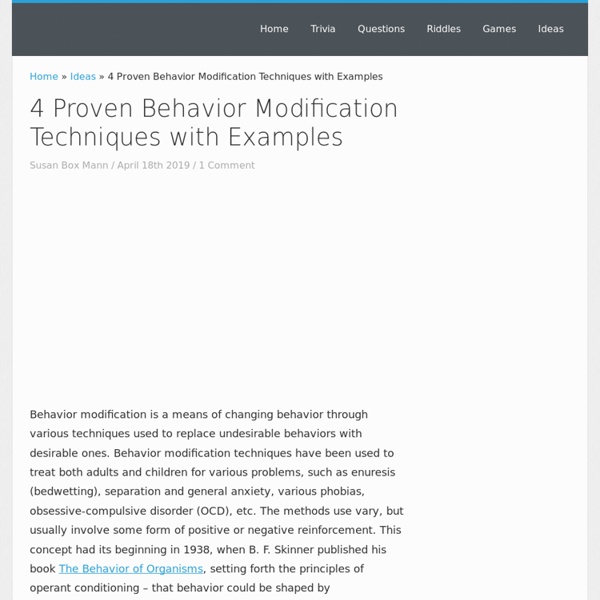 Behavior modification is a means of changing behavior through various techniques used to replace undesirable behaviors with desirable ones. Behavior modification techniques have been used to treat both adults and children for various problems, such as enuresis (bedwetting), separation and general anxiety, various phobias, obsessive-compulsive disorder (OCD), etc. The methods use vary, but usually involve some form of positive or negative reinforcement. This concept had its beginning in 1938, when B. F. Skinner published his book The Behavior of Organisms, setting forth the principles of operant conditioning – that behavior could be shaped by reinforcement or the lack of reinforcement. With behavior modification, you are not worried about the cause for the behavior, you are only using a method to change it. Using Positive and Negative Reinforcement for Behavior Modification There are four main components of behavior modification generally recognized by experts in the field. Attention.

Behavior Modification to Help Your Child Behavior modification is defined as "the alteration of behavioral patterns through the use of such learning techniques as biofeedback and positive or negative reinforcement." More simply, you can modify your child's behavior with positive consequences and negative consequences. Behavior modification is based on the idea that good behavior should lead to positive consequences and bad behavior should lead to negative consequences. This approach is often used to discipline kids with ADHD, autism, or oppositional defiant disorder. Positive Vs Negative Reinforcement Reinforcement is a fundamental concept of Operant Conditioning, whose major objective is to increase the rate of certain undesired behavior from occurring again. Reinforcement can be further classified into two major parts The major purpose of both these reinforcement types is to increase the rate of certain behavior although they have many similarities and differences. By introducing the concept of reinforcement to an individual, the individual gets encouraged to perform the behavior in a repeated manner whether to avoid any undesirable stimulusreceive the desirable reinforcer or reward again Differences Between Positive and Negative Reinforcement

Article 4.2: Rewarding behavior is key to parenting teens, study suggests Parenting is hard, and parenting teens brings about an entirely new set of challenges, from keeping their rooms clean to getting them home before curfew. But, a new study suggests parents who want their teenagers to keep their grades up could have better success if they focus more on rewarding good behavior and less on threatening to punish the bad. According to the report, published in PLOS Computational Biology, British researchers have found that adolescents focus well on positive incentives, but have difficulty staying motivated to avoid penalties. The study shows that teens and adults learn in different ways, according to the study’s lead author Stefano Palminteri, a researcher with the Institute of Cognitive Neuroscience at University College London.

Negative Punishment: Taking Away Privileges to Discipline Children Taking away privileges can be one of the most effective discipline strategies. Make sure your child knows that privileges need to be earned, and they're not a given right. Keep in mind that privileges don't have to involve expensive items or serious extras. Instead, privileges can include anything from time to watch TV or an opportunity to spend time with friends. There are some things you can do to make sure taking away a privilege is an effective consequence for your child. Choose a Privilege to Be Removed

Using Reinforcement and Punishment at Home How do I get my child to listen to me at home? This is a common question I hear from parents. One solution is by using the basic principles of reinforcement and punishment. These principles will allow parents to gain control over their child’s behavior, and they will begin to see a decrease in negative behaviors and an increase in positive behaviors at home. Tips for Using Reinforcement at Home

Effective Consequences for Teenagers If you’re having trouble giving effective consequences to your teen, know that you are not alone. Many parents tell me that nothing seems to work, and that coming up with the right thing for their child can seem like an impossible task. If you’re the parent of an adolescent, you may have grounded your child, taken away their video games, or suspended their driving privileges for months on end. But as James Lehman says, you can’t punish kids into acceptable behavior—it just doesn’t work that way. “You can’t punish kids into acceptable behavior.” Rather, an effective consequence should encourage your child to change his behavior — whether that is abiding by the house rules, or treating people respectfully.

10 Normal Teenage Behavior Problems And How To Handle Them Image: iStock Understanding Teenage Behavior Problems Dealing with a teenager is not easy. No matter how good a parent you are, and how great your relationship with your children is, you are likely to face parenting roadblocks when it comes to your teenager. Behavior problems are common in teenagers. But you can deal with them with ease if you are willing to put in the effort to understand what they are going through and what it is that they expect of you. Article 3b.2: Positive Punishment: What It Is, Benefits, and Examples Positive punishment is a form of behavior modification. In this case, the word “positive” doesn’t refer to something pleasant. Positive punishment is adding something to the mix that will result in an unpleasant consequence. The goal is to decrease the likelihood that the unwanted behavior will happen again in the future.

Parenting Teens: When It Comes To Learning, Positive Reinforcement Trumps Punishment Teens generally aren’t afraid to defy authority. Generations of parents know this, having tried different strategies for getting their adolescents to do what they ask — often in attempts to keep them safe and help pave a path toward success. Now, a new study shows that rewards, rather than punishments, could be the way to get them to cooperate. Why Positive Reinforcement is Better than Punishment - Clever Little Monkey Psychologists often encourage parents to adopt strategies of classic behaviour modification to alter their children’s challenging, naughty behaviours instead of using positive reinforcement techniques. The theory is that the immediate consequence that you receive after performing an action makes you more or less likely to repeat the action in future. Punishment strategies are old news Historically, this meant that we often focused on punishment strategies, for example giving children hidings or extra homework and chores as a consequence to their undesirable behaviour. However punishment, especially corporal punishment, such as physical hidings and caning, usually only angers and frustrates the child, while also potentially being destructive to the parent-child relationship.

Stages of Adolescence By: Brittany Allen, MD, FAAP & Helen Waterman, DO Adolescence is the period of transition between childhood and adulthood. It includes some big changes—to the body, and to the way a young person relates to the world. Article 3b.1: is Negative Punishment (Examples and Effectiveness) In this article, we will review negative punishment, its definition, examples, and drawbacks. American psychologist B.F. Skinner developed the theory of operant conditioning, which stated that a person or animal’s behavior could be increased or decreased by adding or removing appropriate stimuli after the behavior is exhibited. The difference between classical conditioning and operant conditioning is that classical affects unconscious behavior, while operant affects conscious behavior. Within operant, punishment aims to reduce a behavior while reinforcement increase a behavior.