What Is Reinforcement in Operant Conditioning? 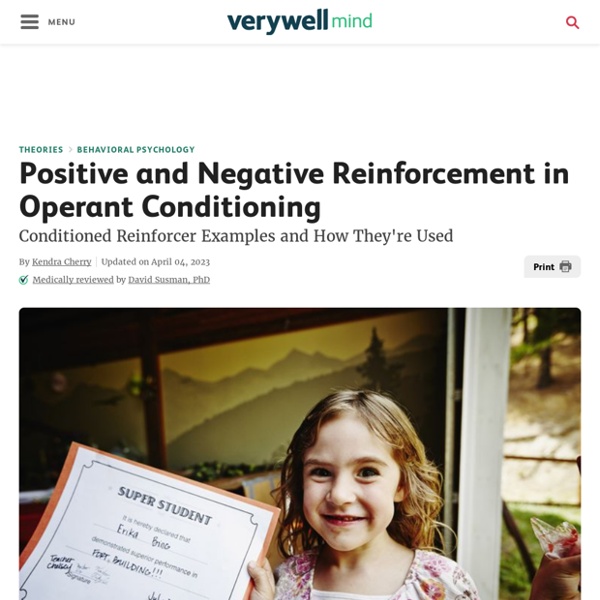 What Is Reinforcement? Psychology, Definition, And Applications By: Toni Hoy Updated February 11, 2021 Medically Reviewed By: Whitney White, MS. What Is Operant Conditioning and How Does It Work? Operant conditioning, sometimes referred to as instrumental conditioning, is a method of learning that employs rewards and punishments for behavior. Through operant conditioning, an association is made between a behavior and a consequence (whether negative or positive) for that behavior.1 For example, when lab rats press a lever when a green light is on, they receive a food pellet as a reward. When they press the lever when a red light is on, they receive a mild electric shock. As a result, they learn to press the lever when the green light is on and avoid the red light. But operant conditioning is not just something that takes place in experimental settings while training lab animals.

Operant Conditioning How Reinforcement and Punishment Modify Behavior Operant conditioning, also known as instrumental conditioning, is a method of learning normally attributed to B.F. Skinner, where the consequences of a response determine the probability of it being repeated. Through operant conditioning behavior which is reinforced (rewarded) will likely be repeated, and behavior which is punished will occur less frequently. By the 1920s, John B. Watson had left academic psychology, and other behaviorists were becoming influential, proposing new forms of learning other than classical conditioning.

Reinforcement A consequence applied that will strengthen an organism's future behavior Using a Skinner box to alter the subject rat's behaviour Reinforcement is an important part of operant or instrumental conditioning. Terminology[edit] In the behavioral sciences, the terms "positive" and "negative" refer when used in their strict technical sense to the nature of the action performed by the conditioner rather than to the responding operant's evaluation of that action and its consequence(s). "Positive" actions are those that add a factor, be it pleasant or unpleasant, to the environment, whereas "negative" actions are those that remove or withhold from the environment a factor of either type.

Positive Reinforcement and Operant Conditioning In operant conditioning, positive reinforcement involves the addition of a reinforcing stimulus following a behavior that makes it more likely that the behavior will occur again in the future. When a favorable outcome, event, or reward occurs after an action, that particular response or behavior will be strengthened. One of the easiest ways to remember positive reinforcement is to think of it as something being added. Road Safety Tips A safe road journey cannot be taken for granted! Like Gracious Joseph, remember to always exercise patience and graciousness. Stay alert, drive carefully and follow traffic rules, signs, and signals. Follow these safe-driving tips and habits to enhance your experience on the roads, and make your journeys more safe and pleasant. Never drink and drive.

Adolescence Adolescence is considered the transitional stage from childhood to adulthood that occurs between ages 13 and 19. But the physical and psychological changes that take place in adolescence can start earlier, during the preteen years between ages 9 and 12. Adolescence can be a time of both disorientation and discovery. The transitional period can raise questions of independence and identity; as adolescents cultivate their sense of self, they may face difficult choices about academics, friendship, sexuality, gender identity, drugs, and alcohol. Young adults tend to have a more egocentric perspective. Why Negative Reinforcement Works Better as Your Child Grows into A Teen If you are someone who has always loved the freedom of “no strings attached”, the idea of marrying and having kids could be quite underwhelming. The idea of having a family always used to bug me, until I finally found the love of my life. It's when I categorically made up my mind about what I wanted from our marriage. I wanted kids, I was clear about that, but I wasn’t certain how I would be taking care of them.

What Is Punishment Psychology, And Should You Use It? Updated February 01, 2021 Medically Reviewed By: Tanya Harell Source: rawpixel.com Negative Reinforcement and Operant Conditioning Negative reinforcement is a term described by B. F. Skinner in his theory of operant conditioning. In negative reinforcement, a response or behavior is strengthened by stopping, removing, or avoiding a negative outcome or aversive stimulus.1

Safe Driving Course - A Negative Reinforcement SINGAPORE — Motorists who have accumulated more than half of their maximum allowable demerit points now have a chance to redeem themselves via the Traffic Police’s Safe Driving Course (SDC), set to be introduced next month. Designed to educate motorists on safe driving techniques, correct dangerous driving behaviour and encourage good road habits, the SDC is an enhancement to the Driver Improvement Points System (DIPS). Motorists who complete the SDC will have three demerit points cancelled from their driving records, but they can only get demerit points cancelled twice during their lifetime. The SDC will consist of both theory and practical sessions for a total of 4 hours. These can be completed within a day or on two different days at one of the licensed driving schools - ComfortDelGro Driving Centre, Singapore Safety Driving Centre and Bukit Batok Driving Centre. Eligible motorists will receive an invitation from the Traffic Police to attend the SDC.