BYU Study: a need for positive reinforcement among teens 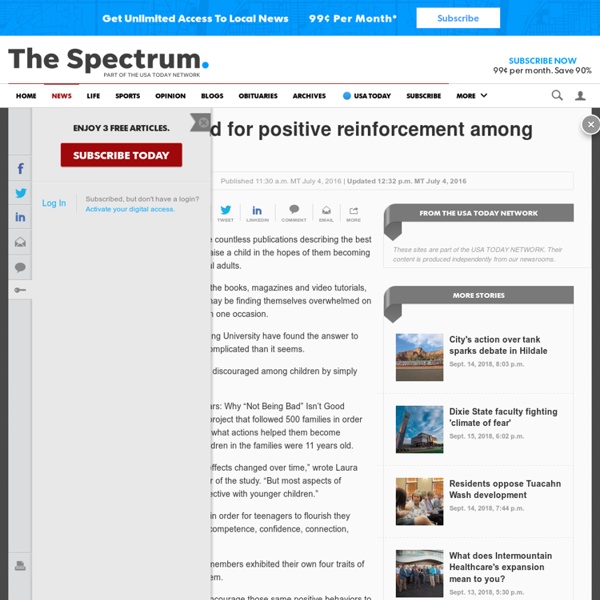 There are countless publications describing the best ways to raise a child in the hopes of them becoming successful adults. Between the books, magazines and video tutorials, parents may be finding themselves overwhelmed on more than one occasion. But a group of researchers at Brigham Young University have found the answer to helping children through life may be less complicated than it seems. The BYU study found bad behavior can be discouraged among children by simply encouraging good behavior. The study, Flourishing During the Teen Years: Why “Not Being Bad” Isn’t Good Enough, used information from a 10-year project that followed 500 families in order to see where the individuals struggled and what actions helped them become successful. When the study began, the children in the families were 11 years old. “For this brief we didn’t look at how these effects changed over time,” wrote Laura Walker, BYU professor and lead researcher of the study. Popular stories

Related:  Reinforcement and Punishment on Teenagers: A Guide for Parents • Operant Conditioning: How does it influences behaviours of teenagers

Parenting Children with Positive Reinforcement (Examples + Charts) Children don’t come with instructions and discipline is often experienced by parents and children alike as an arena where our will and wits are tested. Positive reinforcement is only one of many forms of discipline, but from the perspective of positive psychology, it may as well be the most important one as it focuses on amplifying what is already good in our children and in ourselves as their caretakers. Positive reinforcement as a form of positive discipline allows us to tap into our children’s individual strengths, draw attention to their personality traits and interests, and as a result give us an opportunity to connect, communicate effectively, and ultimately empower them to be more of themselves. Before you read on, we thought you might like to download our 3 Positive Psychology Exercises for free. You can download the free PDF here.

Rewarding behavior is key to parenting teens, study suggests Parenting is hard, and parenting teens brings about an entirely new set of challenges, from keeping their rooms clean to getting them home before curfew. But, a new study suggests parents who want their teenagers to keep their grades up could have better success if they focus more on rewarding good behavior and less on threatening to punish the bad. According to the report, published in PLOS Computational Biology, British researchers have found that adolescents focus well on positive incentives, but have difficulty staying motivated to avoid penalties. The study shows that teens and adults learn in different ways, according to the study’s lead author Stefano Palminteri, a researcher with the Institute of Cognitive Neuroscience at University College London. It suggests that “in some cases positive feedback may have more of an effect than negative feedback on learning” in adolescents. “Rewards give them something they want to think about,” Allen said.

Article 3: Positive and Negative Reinforcement When it comes to children, teaching them behaviors that they need to repeat and not repeat is never an easy task. But what makes decisions on parenting a lot easier is understanding the benefits of encouraging or discouraging certain behaviors. Both positive and negative reinforcements are used for all age categories and levels of mental activity. All of us can profit from reinforcement but especially developing children, teenagers, elderly, and those with psychological or developmental issues. They are all in need of positive and negative reinforcement to help accomplish certain tasks or milestones.

Positive Reinforcement for Adolescents By the time children have reached adolescence, their responses are often ingrained, but parental actions can still positively affect adolescent behavior. Since adolescents are struggling to develop their personal identity and are concerned about their body image, parental support is crucial to help positively frame experiences as learning opportunities. Positive reinforcement remains a powerful teaching tool during these formative years, and we encourage parents to take time to contemplate the ways they can help adolescents mature and become self-reliant. Reinforce mature decisions by allowing increased privileges when adolescent demonstrates increased responsibility.

Parents' Use of Physical Punishment Increases Violent Behavior Among Youth Violent behavior is one of the leading causes of mortality among youth. Research has revealed numerous predictors of violent behavior among youth, many of which relate to various forms of violence exposure (e.g., media violence, bullying, neighborhood violence, corporal punishment, etc.). In this study, researchers examined the relationship between young adolescents’ involvement in and attitudes toward violence, parental use of physical punishment, and parental expectations of violence use (both perceived and stated) among youth.

Why Harsh Punishments Don’t Work Harsh punishments are not effective for improving a child’s behavior. Instead, they only create resentment. If you punish your child too harshly, he will only be thinking about his anger toward you and not about the consequences of his actions. Parenting Teens: When It Comes To Learning, Positive Reinforcement Trumps Punishment Teens generally aren’t afraid to defy authority. Generations of parents know this, having tried different strategies for getting their adolescents to do what they ask — often in attempts to keep them safe and help pave a path toward success. Now, a new study shows that rewards, rather than punishments, could be the way to get them to cooperate. Researchers at the University College London asked 18 volunteers aged 12 to 17 and 20 volunteers aged 18 to 32 to complete both a learning task and post-learning task in which they chose between abstract symbols, each associated with a fixed chance of reward, punishment, or no outcome. As the trial progressed, participants learned which symbols were likely to lead to each result and adjusted their choices accordingly.

Article 4: Positive Punishment: What Is It And How It Works? - MomJunction Image: Shutterstock Positive punishment! Sounds like a perfect oxymoron. But how can a punishment be positive? How can you even enforce such a punishment? Parenting A Teen Through Positive Reinforcement - Back On Track Most parents can agree: the teenage years can be rough! Hormones are raging, they are trying to gain more independence, and they spend a lot of time away from their parents and their home while hanging with friends. One minute they love and adore you, the next minute you ruined their life. Can many of you relate?

Articles describing the transition of children towards adolescence often discuss the various challenges that parents face. In this article, a differing perspective is shown. The article shows that adolescence needs to be given the space to make their own mistakes. Yet, their families should still provide them with care and love, while continuing to advocate for positive conditioning. Under the 5Cs environment, adolescent can flourish and become valuable contributions to society. by fareeshahdawoodepeer Sep 24

Related:  siti_khaddijah
Related:  Reinforcement and Punishment on Teenagers: A Guide for Parents   -  Operant Conditioning: How does it influences behaviours of teenagers