How to Reward Your Teen for Good Behavior 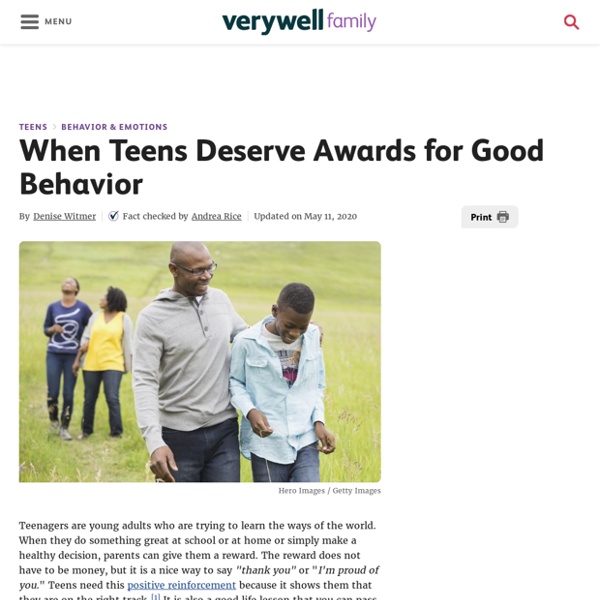 Teenagers are young adults who are trying to learn the ways of the world. When they do something great at school or at home or simply make a healthy decision, parents can give them a reward. The reward does not have to be money, but it is a nice way to say "thank you" or "I'm proud of you." Teens need this positive reinforcement because it shows them that they are on the right track.1 It is also a good life lesson that you can pass on: good things happen to good people. When Do Teenagers Deserve a Reward? A teen can earn a reward for positive behavior or by changing negative behavior.1 While you should not feel that you have to "pay" for every good thing your teen does, reinforcement of good behavior will help ensure that it continues. Teen-Approved Rewards The following list includes a number of rewards you might want to consider.

Positive Reinforcement for Adolescents By the time children have reached adolescence, their responses are often ingrained, but parental actions can still positively affect adolescent behavior. Since adolescents are struggling to develop their personal identity and are concerned about their body image, parental support is crucial to help positively frame experiences as learning opportunities. Positive reinforcement remains a powerful teaching tool during these formative years, and we encourage parents to take time to contemplate the ways they can help adolescents mature and become self-reliant. Reinforce mature decisions by allowing increased privileges when adolescent demonstrates increased responsibility. For instance, an adolescent who consistently demonstrates the ability to come home at the requested time might be allowed a later curfew - whereas an adolescent who has not completed requested chores will not be allowed to leave home that evening.Express pleasure at positive adolescent behavior.

Discipline for Teens: Strategies and Challenges When your child becomes a teenager, your parenting role is likely to shift. You may find yourself becoming more of a guide, rather than an enforcer. That’s not to say your child won’t need you to intervene when there are safety issues or that your teen won’t need consequences. But, by now, it’s OK to let your child make some choices on their own, even when you think it’s a bad choice. Parenting A Teen Through Positive Reinforcement - Back On Track Most parents can agree: the teenage years can be rough! Hormones are raging, they are trying to gain more independence, and they spend a lot of time away from their parents and their home while hanging with friends. One minute they love and adore you, the next minute you ruined their life. Can many of you relate? When tempers flare and disagreements are happening, it’s hard to not resort to yelling and harsh discipline, but studies are showing us that positive reinforcement may be the key to success, not just in the home but also in their school life.

Parenting Children with Positive Reinforcement (Examples + Charts) Children don’t come with instructions and discipline is often experienced by parents and children alike as an arena where our will and wits are tested. Positive reinforcement is only one of many forms of discipline, but from the perspective of positive psychology, it may as well be the most important one as it focuses on amplifying what is already good in our children and in ourselves as their caretakers. Positive reinforcement as a form of positive discipline allows us to tap into our children’s individual strengths, draw attention to their personality traits and interests, and as a result give us an opportunity to connect, communicate effectively, and ultimately empower them to be more of themselves. Before you read on, we thought you might like to download our 3 Positive Psychology Exercises for free. You can download the free PDF here. A Look at Parenting with Positive Reinforcement

Teenage Behaviour Problems teen issues Is your teenager violent, depressed, abusing alcohol or drugs, or facing other problems? Here’s how to ease the stress at home and help your teen transition into a happy, successful adult. Why do teens act the way they do? Parenting a teenager is never easy. Teen Bad Behavior & Discipline Plans - Promoting Healthy Growth Ages 15 - 18 Bad behavior doesn't end when your child graduates from diapers -- or even from middle school. In fact, the teen years can bring some of the toughest discipline challenges parents have to face. Sulking, arguing, lying, and rebelling are just a few of the ways teens misbehave. There's a good explanation for these bad behaviors. As teens become more independent, they still lack the emotional maturity they need to make informed, thoughtful decisions. The parts of the brain that control decision making and impulse control haven't fully developed.

Punishments vs. Consequences: Teach Your Teen the Difference When I work with parents of teenagers, our conversations inevitably turn toward discipline. “How do get my teen to follow the rules?” “My teen won’t clean up after himself. Effective Consequences for Teenagers If you’re having trouble giving effective consequences to your teen, know that you are not alone. Many parents tell me that nothing seems to work, and that coming up with the right thing for their child can seem like an impossible task. If you’re the parent of an adolescent, you may have grounded your child, taken away their video games, or suspended their driving privileges for months on end. But as James Lehman says, you can’t punish kids into acceptable behavior—it just doesn’t work that way. “You can’t punish kids into acceptable behavior.”

BYU Study: a need for positive reinforcement among teens There are countless publications describing the best ways to raise a child in the hopes of them becoming successful adults. Between the books, magazines and video tutorials, parents may be finding themselves overwhelmed on more than one occasion. But a group of researchers at Brigham Young University have found the answer to helping children through life may be less complicated than it seems. The BYU study found bad behavior can be discouraged among children by simply encouraging good behavior. The study, Flourishing During the Teen Years: Why “Not Being Bad” Isn’t Good Enough, used information from a 10-year project that followed 500 families in order to see where the individuals struggled and what actions helped them become successful.

What is Considered Normal Teenage Behavior? - Paradigm Treatment A decade or more ago, you made it through the “terrible twos” with your child. Now that he or she is a teenager, you might feel as though you’re playing a whole other ballgame. Your adolescent is transitioning from a child into an adult, and they might exhibit some behaviors that are puzzling or concerning to you. How can you tell whether a behavior is normal teenage behavior or something more?

This article provides a list of different rewards that parents can use for positive reinforcement. by ahmadsholaahuddin Mar 29

This gives a list of how to increase positive behaviour in teens via positive reinforcers such as extra curfew time and more tangible rewards such as the food they like, such as pizza. by callistael Mar 28

Rewards that a teenager personally finds motivating does a lot more to increase desirable behaviour than those assumed to be so by adult authority figures. by lawrenztan Sep 24

Positive reinforcement surely does motivate the teenager to keep up the good work and therefore, increases the desirable behaviour. by huiqi Sep 20