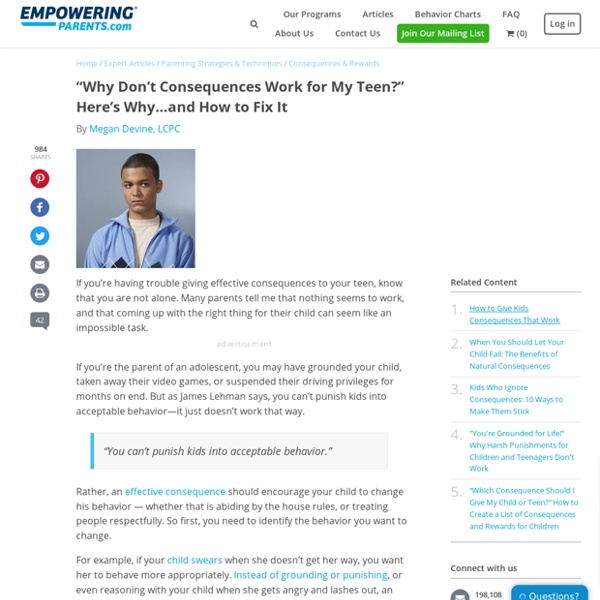 If you’re having trouble giving effective consequences to your teen, know that you are not alone. Many parents tell me that nothing seems to work, and that coming up with the right thing for their child can seem like an impossible task. If you’re the parent of an adolescent, you may have grounded your child, taken away their video games, or suspended their driving privileges for months on end. But as James Lehman says, you can’t punish kids into acceptable behavior—it just doesn’t work that way. “You can’t punish kids into acceptable behavior.” Rather, an effective consequence should encourage your child to change his behavior — whether that is abiding by the house rules, or treating people respectfully. For example, if your child swears when she doesn’t get her way, you want her to behave more appropriately. Let’s break this down according to The Total Transformation Program: Effective consequences are ones that are connected to the original behavior and are both task- and time-specific.

4 Proven Behavior Modification Techniques with Examples Behavior modification is a means of changing behavior through various techniques used to replace undesirable behaviors with desirable ones. Behavior modification techniques have been used to treat both adults and children for various problems, such as enuresis (bedwetting), separation and general anxiety, various phobias, obsessive-compulsive disorder (OCD), etc. The methods use vary, but usually involve some form of positive or negative reinforcement. This concept had its beginning in 1938, when B. F.

Parenting Teens: When It Comes To Learning, Positive Reinforcement Trumps Punishment Teens generally aren’t afraid to defy authority. Generations of parents know this, having tried different strategies for getting their adolescents to do what they ask — often in attempts to keep them safe and help pave a path toward success. Now, a new study shows that rewards, rather than punishments, could be the way to get them to cooperate. Researchers at the University College London asked 18 volunteers aged 12 to 17 and 20 volunteers aged 18 to 32 to complete both a learning task and post-learning task in which they chose between abstract symbols, each associated with a fixed chance of reward, punishment, or no outcome. As the trial progressed, participants learned which symbols were likely to lead to each result and adjusted their choices accordingly.

Positive Reinforcement as Opposed to Negative for Teen Issues  - Empowered Teens And Parents Looking at the Good: Are You Providing Your Teen with Enough Positive Reinforcement? How to Reward Good Behavior and Calm Teen Issues 1. Look at Effort, Not Results The value of reinforcing positive behaviour for our teens As children approach adolescence, they sometimes begin testing limits, bending the rules and otherwise going against the grain. While this is normal behaviour for teens, it can be incredibly trying for you, as a parent. Teenagers may also be dealing with the stresses that come with trying to fit in with their peers and assert their growing independence. However, at the same time, they are looking for validation from the adults around them. It's crucial, therefore, for parents and teachers to provide as much guidance and positive reinforcement as possible, rather than simply tightening the rules. While it may be challenging to reward and praise a teen, who may appear to be indifferent to us, it's well worth the effort.

Developmental Psychology at Vanderbilt Jacob Lee and Matthew Snodgress There is no one individual who influences the development of a child more than the parent. Every aspect of the child’s progression through life, beginning with their genetic makeup, is greatly influenced, if not completely determined by, the parent figure in the child’s life. Parent figures choose the climate which the child will grow up in.

Tips for Communicating With Your Teen The teenage years have a lot in common with the terrible twos. During both stages our kids are doing exciting new things, but they’re also pushing boundaries (and buttons) and throwing tantrums. The major developmental task facing both age groups is also the same: kids must pull away from parents and begin to assert their own independence. No wonder they sometimes act as if they think they’re the center of the universe.

Positive Reinforcement in Psychology (Definition + 5 Examples) If you read our earlier piece on positive punishment, you know that there are different methods of teaching and instilling good habits and behaviors. One of the most powerful and effective methods is one that you’re probably at least somewhat familiar with: positive reinforcement. Before you read on, we thought you might like to download our 3 Positive Psychology Exercises for free. These science-based exercises will explore fundamental aspects of positive psychology including strengths, values and self-compassion and will give you the tools to enhance the wellbeing of your clients, students or employees. You can download the free PDF here. What is the Meaning of Positive Reinforcement?