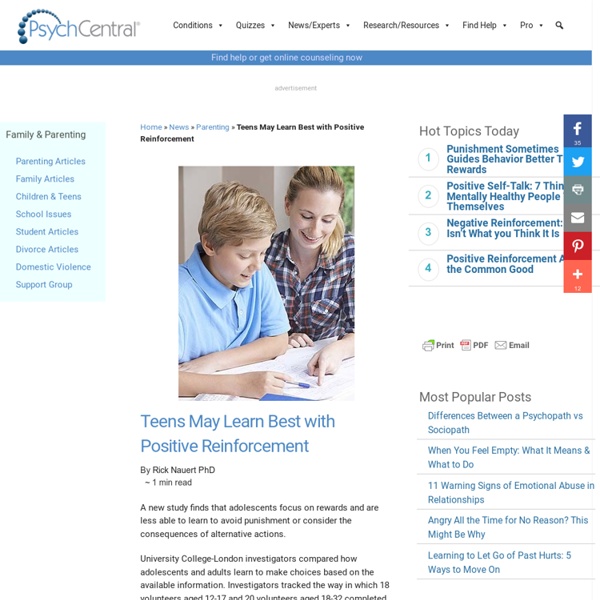 A new study finds that adolescents focus on rewards and are less able to learn to avoid punishment or consider the consequences of alternative actions. University College-London investigators compared how adolescents and adults learn to make choices based on the available information. Investigators tracked the way in which 18 volunteers aged 12-17 and 20 volunteers aged 18-32 completed tasks in which they had to choose between abstract symbols. Each symbol was consistently associated with a fixed chance of a reward, punishment, or no outcome. As the trial progressed, participants learned which symbols were likely to lead to each outcome and adjusted their choices accordingly. Adolescents and adults were equally good at learning to choose symbols associated with reward, but adolescents were less good at avoiding symbols associated with punishment. The study appears in PLOS Computational Biology. “From this experimental lab study we can draw conclusions about learning during adolescence.

Parenting Teens: When It Comes To Learning, Positive Reinforcement Trumps Punishment Teens generally aren’t afraid to defy authority. Generations of parents know this, having tried different strategies for getting their adolescents to do what they ask — often in attempts to keep them safe and help pave a path toward success. Now, a new study shows that rewards, rather than punishments, could be the way to get them to cooperate. BYU Study: a need for positive reinforcement among teens There are countless publications describing the best ways to raise a child in the hopes of them becoming successful adults. Between the books, magazines and video tutorials, parents may be finding themselves overwhelmed on more than one occasion. But a group of researchers at Brigham Young University have found the answer to helping children through life may be less complicated than it seems. The BYU study found bad behavior can be discouraged among children by simply encouraging good behavior. The study, Flourishing During the Teen Years: Why “Not Being Bad” Isn’t Good Enough, used information from a 10-year project that followed 500 families in order to see where the individuals struggled and what actions helped them become successful. When the study began, the children in the families were 11 years old.

I Caught My Teenager Lying - What's Next? One of the hardest things we as parents face is to decide what to do when we think our teenager is lying to us. It is hard to deal with this because our reactions are typically coloured by emotions such as betrayal and fear. Betrayal because we always thought we would have the trust of our children, and fear because we wonder if this is just the first sign that they might be involved in something dangerous or harmful. Understand Why Your Teen Might Feel the Need to Lie However, it helps to take a few steps back and try to understand the reasons behind why your child might be lying.

Positive Reinforcement in Teenagers Teenagers might need special incentives to learn skills, develop responsibility and make positive decisions about their conduct. One effective way to encourage the behaviors you want is to use the behavior management technique of positive reinforcement. Through positive reinforcement, you gradually make it more likely that your teenager will demonstrate the desired behaviors. Goals of Positive Reinforcement The beauty of positive reinforcement is that it teaches and motivates specific behaviors by using items or activities that appeal to your teenager, states Shannon Baranski, psychology professor with the Houston Community College. Instead of punishing your adolescent by taking away an item or a privilege, you harness the psychological power of a powerful incentive to encourage him to cooperate or perform.

Negative Punishment Examples and Scenarios Nobody ever wants their stuff taken away. That is the main concept behind negative punishment. Using negative punishment example scenarios, gain an understanding of the concept and its effectiveness. Developmental Psychology at Vanderbilt Jacob Lee and Matthew Snodgress There is no one individual who influences the development of a child more than the parent. Every aspect of the child’s progression through life, beginning with their genetic makeup, is greatly influenced, if not completely determined by, the parent figure in the child’s life. Parent figures choose the climate which the child will grow up in. Whether that is in regard to family dynamics, intellectual stimulation, or social development. One way parents dictate the development of their child is through discipline.

Rewarding behavior is key to parenting teens, study suggests Parenting is hard, and parenting teens brings about an entirely new set of challenges, from keeping their rooms clean to getting them home before curfew. But, a new study suggests parents who want their teenagers to keep their grades up could have better success if they focus more on rewarding good behavior and less on threatening to punish the bad. According to the report, published in PLOS Computational Biology, British researchers have found that adolescents focus well on positive incentives, but have difficulty staying motivated to avoid penalties. The study shows that teens and adults learn in different ways, according to the study’s lead author Stefano Palminteri, a researcher with the Institute of Cognitive Neuroscience at University College London.

It’s Not Discipline, It’s a Teachable Moment WHETHER facing a toddler temper tantrum or an insolent adolescent, every parent struggles to find the best way to discipline children. But many parents fail. A recent study found that 1 in 3 say the methods they use simply don’t work.

When Should You Take the Phone Away from a Teenager? Kate Gosselin, the mom in the reality series Kate Plus 8, isn’t exactly someone we’d turn to for inspirational parenting. But she recently said something on a television special that caught our attention. Speaking of her two 13-year-old daughters, she tells the camera: “I got those girls cell phones and iPads so that I could take them away.” Gosselin makes the move sound especially manipulative, but in fact taking away “screen time,” or access to electronic devices, has become a parent’s go-to consequence for unacceptable behavior at practically every age, from toddlers to teens.

What is Negative Punishment (Examples and Effectiveness) In this article, we will review negative punishment, its definition, examples, and drawbacks. American psychologist B.F. Skinner developed the theory of operant conditioning, which stated that a person or animal’s behavior could be increased or decreased by adding or removing appropriate stimuli after the behavior is exhibited. The difference between classical conditioning and operant conditioning is that classical affects unconscious behavior, while operant affects conscious behavior. Within operant, punishment aims to reduce a behavior while reinforcement increase a behavior.

When caning can turn into outright child abuse, Singapore News Recently, a video of a couple hitting their daughter publicly in Jurong West with a cane and a tree branch went viral, prompting the mother to write to the media to apologise for her action. She said her daughter had lied to her about homework and she "just exploded" as she could not believe that she had raised a liar. The video, posted two months ago, sparked a debate on whether caning is the best way to discipline children. Though caning is not so common here nowadays, it is still practised.

It can be seen that teenagers respond much better when the reward-based approach is being used. This might be mainly because teenagers have a low self esteem and they will feel much greater if they get rewarded rather than punished. This proves how positive reinforcement is a better alternative to punishments. by fareeshahdawoodepeer Sep 24