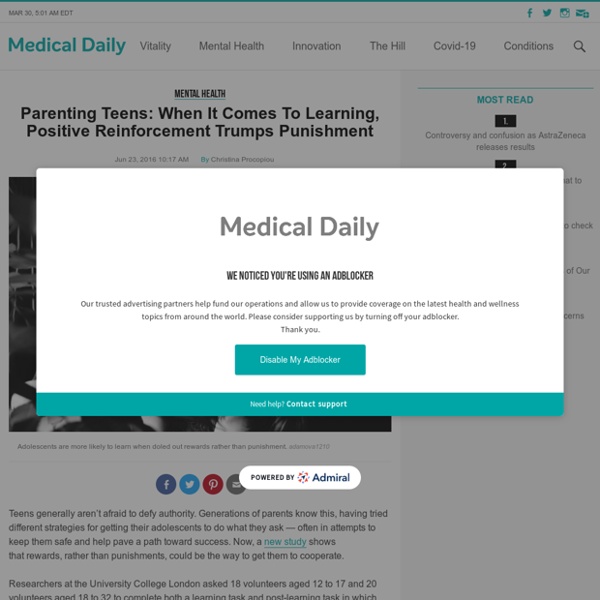 Teens generally aren’t afraid to defy authority. Generations of parents know this, having tried different strategies for getting their adolescents to do what they ask — often in attempts to keep them safe and help pave a path toward success. Now, a new study shows that rewards, rather than punishments, could be the way to get them to cooperate. Researchers at the University College London asked 18 volunteers aged 12 to 17 and 20 volunteers aged 18 to 32 to complete both a learning task and post-learning task in which they chose between abstract symbols, each associated with a fixed chance of reward, punishment, or no outcome. As the trial progressed, participants learned which symbols were likely to lead to each result and adjusted their choices accordingly. Adults and teens alike proved equally capable of learning to be motivated by rewards, but the adults learned to avoid symbols associated with punishment while the adolescents did not. Source Stefano Palminteri, Emma J.

Positive Reinforcement for Adolescents By the time children have reached adolescence, their responses are often ingrained, but parental actions can still positively affect adolescent behavior. Since adolescents are struggling to develop their personal identity and are concerned about their body image, parental support is crucial to help positively frame experiences as learning opportunities. Positive reinforcement remains a powerful teaching tool during these formative years, and we encourage parents to take time to contemplate the ways they can help adolescents mature and become self-reliant. Rewarding behavior is key to parenting teens, study suggests Parenting is hard, and parenting teens brings about an entirely new set of challenges, from keeping their rooms clean to getting them home before curfew. But, a new study suggests parents who want their teenagers to keep their grades up could have better success if they focus more on rewarding good behavior and less on threatening to punish the bad. According to the report, published in PLOS Computational Biology, British researchers have found that adolescents focus well on positive incentives, but have difficulty staying motivated to avoid penalties. The study shows that teens and adults learn in different ways, according to the study’s lead author Stefano Palminteri, a researcher with the Institute of Cognitive Neuroscience at University College London. It suggests that “in some cases positive feedback may have more of an effect than negative feedback on learning” in adolescents. “Rewards give them something they want to think about,” Allen said.

What Is 'positive Punishment'? Definition And Real-World Examples Positive punishment is a popular concept in parenting. We'll explain what it is and how you can implement it with six examples. Parenting isn't always a walk in the park, and determining the best way to address your child's inevitable poor behavior can be a tricky line to walk. Discipline strategies for teenagers Around the time that your child starts secondary school, you might need to adjust your approach to discipline. Effective discipline for teenagers focuses on setting agreed limits and helping teenagers work within them. Teenage discipline: the basics Discipline isn’t about punishment. It’s about teaching children appropriate ways to behave. For teenagers, discipline is about agreeing on and setting appropriate limits and helping them behave within those limits.

Positive Reinforcement in Teenagers Teenagers might need special incentives to learn skills, develop responsibility and make positive decisions about their conduct. One effective way to encourage the behaviors you want is to use the behavior management technique of positive reinforcement. Through positive reinforcement, you gradually make it more likely that your teenager will demonstrate the desired behaviors. Goals of Positive Reinforcement 14 Best Examples Of Operant Conditioning Operant conditioning, also known as instrumental conditioning, is a method of learning that employs punishments and rewards for behavior. In this method, a link is established between a behavior and a consequence (whether positive or negative) for that behavior. For example, when a monkey presses a button when a LED is on, he receives a banana as a reward. When he presses the button when the LED is off, he receives a mild electric shock. As a result, he learns to press the button when the LED is on and avoids it when the LED is off. Actually, the monkey forms a link between the behavior (press the button when LED lights up) and the consequences (get a banana).

Reinforcement vs. Punishment: What They Are & 12 Examples "Reinforcement is anything that increases the likelihood that a person will exhibit the same behavior again in the future," says licensed psychologist Nicole Beurkens, Ph.D., CNS. "You are aiming to increase a desired behavior such as speaking politely, doing chores, playing nicely with siblings, and so on." And chances are you're likely doing this already in some capacity: You praise your kid for tidying up after themselves, you compliment them after getting good grades in school, you take them out for a treat after hitting a milestone or doing well in an extracurricular. As Pressman tells us, it's simply "giving kids attention for a certain behavior."

What’s Going On in the Teenage Brain? A child’s body goes through physical changes that are obvious to all parents. Less obvious are the vital changes taking place in a child’s brain, particularly as she enters her teenage years. The brain, after all, is part of the body and, more importantly, is the organ that controls — or tries to control — the body’s activities. Teenagers confront challenges, pressures, stresses, temptations, and asks in brains that are not yet fully developed. It’s not just that teenagers haven’t had the time and experience to acquire a wide sense of the world; quite simply, their brains just haven’t physically matured yet.

Positive Punishment Positive punishment is a concept used in B.F. Skinner's theory of operant conditioning. How exactly does the positive punishment process work? The goal of any type of punishment is to decrease the behavior that it follows. Developmental Psychology at Vanderbilt Jacob Lee and Matthew Snodgress There is no one individual who influences the development of a child more than the parent. Every aspect of the child’s progression through life, beginning with their genetic makeup, is greatly influenced, if not completely determined by, the parent figure in the child’s life. Parent figures choose the climate which the child will grow up in.

This study shows how teens may be more receptive to positive reinforcement as compared to punishment. by callistael Mar 28

Study results from University College London have shown that teens in the stage of adolescence are more likely to be more receptive to positive reinforcement than punishment in learning. Hence, parents can tap into this findings by seizing opportunities to positively reinforce their teenage children for their good behaviors and also any of their efforts made to correct their bad behaviors. by jonquah Sep 25