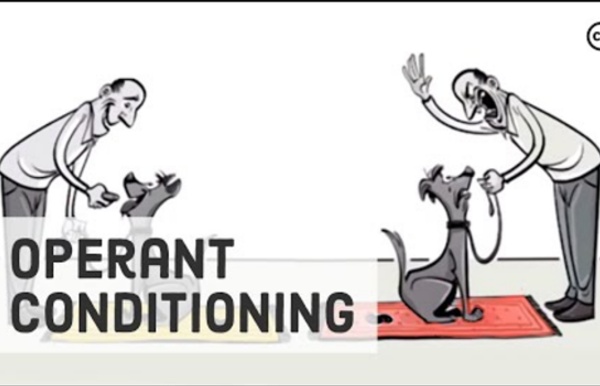 What Is Operant Conditioning and How Does It Work? Operant conditioning, sometimes referred to as instrumental conditioning, is a method of learning that employs rewards and punishments for behavior. Through operant conditioning, an association is made between a behavior and a consequence (whether negative or positive) for that behavior.1 For example, when lab rats press a lever when a green light is on, they receive a food pellet as a reward. When they press the lever when a red light is on, they receive a mild electric shock. As a result, they learn to press the lever when the green light is on and avoid the red light. Operant Conditioning How Reinforcement and Punishment Modify Behavior Operant conditioning, also known as instrumental conditioning, is a method of learning normally attributed to B.F. Skinner, where the consequences of a response determine the probability of it being repeated. Through operant conditioning behavior which is reinforced (rewarded) will likely be repeated, and behavior which is punished will occur less frequently. By the 1920s, John B.

Why compliments make us feel so good Your haircut looks great. Your speech was so moving. You are a really good friend; I can’t tell you how great it was to talk last week when I was upset. Lorry seen travelling against traffic along TPE; driver arrested SINGAPORE — A 28-year-old man believed to have driven a lorry against the flow of traffic along the Tampines Expressway (TPE) has been arrested, the police said in a news release on Sunday (April 12). The traffic police received several calls about the incident, which occurred on Thursday night at around 11.40pm. No injuries were reported. Several videos showing a lorry going against the flow of traffic were posted online. In some of the videos, the lorry is seen with its headlights turned off.

Road Safety Campaigns RoadSense Carnival On 6 July 2019, Traffic Police organised the RoadSense Carnival at the Ngee Ann City Civic Plaza. The inaugural RoadSense Carnival was graced by Mr Amrin Amin, Senior Parliamentary Secretary for Ministry of Home Affairs & Ministry of Health. The event’s theme was ‘Take the Road to Responsibility’, and this event was organised to educate road users in Singapore about the importance of graciousness to create a more pleasant road user experience for all Singaporeans. (Positive Punishment and Negative reinforcement examples) 12 Examples of Positive Punishment & Negative Reinforcement You might be thinking that “positive punishment” sounds like an oxymoron, after all, how can punishment be positive? Not many people “like” punishment, right? The disconnect in understanding this concept comes from the usage of the word “positive;” here at PositivePsychology.com, we generally use the term “positive” to refer to things that are inherently good, things that are life-giving, and things that promote thriving and flourishing. The concept of positive punishment comes from a very different era and a very different perspective on psychology; namely, the 1930s and behaviorism. So, what actually is positive punishment and how does it relate to parenting, teaching, and even the workplace? Before you read on, we thought you might like to download our 3 Positive Psychology Exercises for free.

This is an introduction to the theory of operant conditioning in layman's terms. by dioriviemae Mar 27