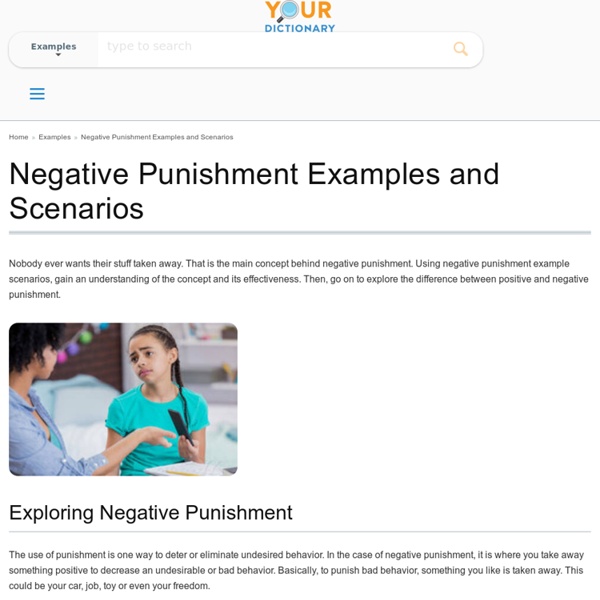 10 Positive Punishment Techniques & Their Effect By: Ashley Brown Updated February 11, 2021 Medically Reviewed By: Laura Angers As a parent, it is natural to wonder about the best way to teach your child right from wrong. Punishing them is no fun, but sometimes it has to be done if you want their behavior to change.

(Positive Reinforcement examples) Positive Reinforcement in Psychology (Definition + 5 Examples) If you read our earlier piece on positive punishment, you know that there are different methods of teaching and instilling good habits and behaviors. One of the most powerful and effective methods is one that you’re probably at least somewhat familiar with: positive reinforcement. Before you read on, we thought you might like to download our 3 Positive Psychology Exercises for free.

Operant Conditioning Examples Burrhus Frederic Skinner was a psychologist and researcher credited with establishing the principles of operant conditioning. B.F. Skinner began with Thorndike's law of effect, which states that behaviors that cause satisfactory results will be repeated. Skinner considered satisfaction to be insufficiently specific to measure, and set out to design a means of measuring learned behaviors. The operant conditioning chamber, popularly known as a Skinner box, was his solution. He kept his test subjects, primarily pigeons and rats, in circumstances that allowed him to closely observe their behavior.

What Is Punishment Psychology, And Should You Use It? Updated February 01, 2021 Medically Reviewed By: Tanya Harell Source: rawpixel.com We were all punished when we were younger at one time or another. However, it is how we are punished that can shape how we will behave in the future. Adolescent learning: rewards, punishments, and the importance of context Adolescents’ unique sensitivity to rewards is thought to be due to increased activity in and communication between areas of the brain that respond to rewards. However, we also know that many of the same brain areas also respond to punishment and that there are dynamic changes occurring throughout the brain during adolescence. Much like the complexity of brain development, the story about how adolescents learn from reinforcement might not be so simple. “The way that adolescents learn from the choices that they have made in the past will ultimately influence their future choices and actions.” An in-depth review of studies examining how we learn from reinforcement across age shows mixed results.