The Study of Punishment in Psychology 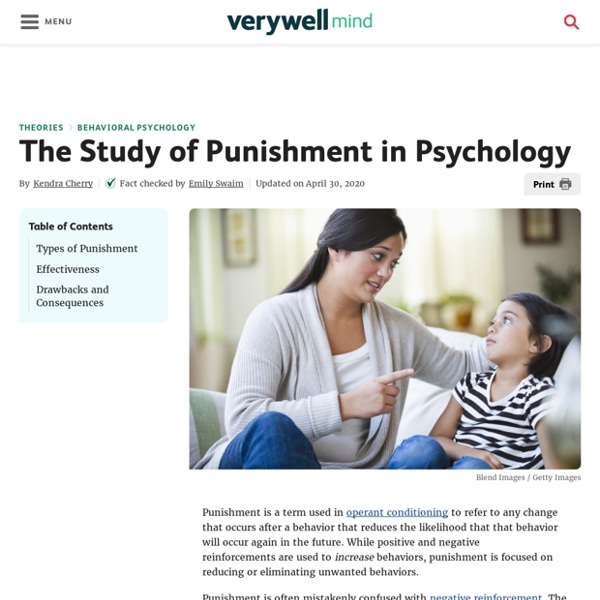 What Is Punishment Psychology, And Should You Use It? Updated February 01, 2021 Medically Reviewed By: Tanya Harell Source: rawpixel.com We were all punished when we were younger at one time or another. However, it is how we are punished that can shape how we will behave in the future. Believe it or not, whether you got a spanking for hitting your sister or a pat on the back can decide what kind of person you will be.

Positive vs Negative Reinforcement: Which Is More Effective? The central premise of Pavlok is getting the user to take action and create a new habit — or change an existing one. To do this, we built “pattern interrupts” — jarring but effective stimuli — into the device that encouraged users to change their routines. We then faced a difficult question that’s challenged behavioral psychologists for decades. Which is more effective for behavior change: Negative or positive reinforcement? Positive reinforcement is a reward for doing something well. Remember the joy of receiving gold star from your kindergarten teacher when you spelled your name correctly? Creative Consequences Menu Search Close What Is Reinforcement in Operant Conditioning? One of the many different ways in which people can learn is through a process known as operant conditioning (also known as instrumental conditioning).1 This involves learning through reinforcement or punishment. The type of reinforcement used can play an important role in how quickly a behavior is learned and the overall strength of the resulting response. Understanding Reinforcement Reinforcement is a term used in operant conditioning to refer to anything that increases the likelihood that a response will occur.

Positive Punishment: What It Is, Benefits, and Examples Positive punishment is a form of behavior modification. In this case, the word “positive” doesn’t refer to something pleasant. Positive punishment is adding something to the mix that will result in an unpleasant consequence. The goal is to decrease the likelihood that the unwanted behavior will happen again in the future. Effective Consequences for Teenagers If you’re having trouble giving effective consequences to your teen, know that you are not alone. Many parents tell me that nothing seems to work, and that coming up with the right thing for their child can seem like an impossible task. If you’re the parent of an adolescent, you may have grounded your child, taken away their video games, or suspended their driving privileges for months on end. But as James Lehman says, you can’t punish kids into acceptable behavior—it just doesn’t work that way. “You can’t punish kids into acceptable behavior.” Rather, an effective consequence should encourage your child to change his behavior — whether that is abiding by the house rules, or treating people respectfully.

Road Safety Tips A safe road journey cannot be taken for granted! Like Gracious Joseph, remember to always exercise patience and graciousness. Stay alert, drive carefully and follow traffic rules, signs, and signals. Follow these safe-driving tips and habits to enhance your experience on the roads, and make your journeys more safe and pleasant. The 4 Parenting Styles: What Works and What Doesn’t By Dr. Maryann Rosenthal, co-author of Be A Parent, Not A Pushover, reprinted with permission from DrMA.com I believe it’s that overall style or pattern of action — rather than a specific decision — that will most affect a child’s behavior. Generally, psychologists have found that there are two main components of parenting styles. One is responsiveness, or how much independence you’re willing to grant.

What Is Reinforcement? Psychology, Definition, And Applications By: Toni Hoy Updated February 11, 2021 Medically Reviewed By: Whitney White, MS. CMHC, NCC., LPC Reinforcement psychology is the study of the effect of reinforcement techniques on behavior. Much of reinforcement psychology is based on the early research of B.F. What Is 'negative Reinforcement'? Definition And Real-World Examples You've heard of negative reinforcement, but how do you put it into practice? These 4 negative reinforcement examples will explain how. You've probably heard terms like "negative reinforcement" and "positive reinforcement" thrown around a lot during the course of your parenting career. And although the concepts of "reinforcement" and "punishment" are related in that they can influence your child's behavior, they go about it in different ways -- and with different results. [RELATED: "Positive Punishment: Using Consequences to Change Your Child's Behavior"] If you decide to try out either -- or both -- of these parenting techniques, it's important that you first understand what they mean, what they do, and how you can incorporate this technique into your parenting style -- and how your babysitter or nanny can incorporate it into their child care repertoire.

Reinforcement sensitivity, coping, and delinquent behaviour in adolescents Abstract Since 1964, the relationship between personality and criminal behaviour has been extensively studied. However, studies, which have examined the Eysenckian dimensions of extraversion, neuroticism and psychoticism have produced mixed results. Safe Driving Course - A Negative Reinforcement SINGAPORE — Motorists who have accumulated more than half of their maximum allowable demerit points now have a chance to redeem themselves via the Traffic Police’s Safe Driving Course (SDC), set to be introduced next month. Designed to educate motorists on safe driving techniques, correct dangerous driving behaviour and encourage good road habits, the SDC is an enhancement to the Driver Improvement Points System (DIPS). Motorists who complete the SDC will have three demerit points cancelled from their driving records, but they can only get demerit points cancelled twice during their lifetime. The SDC will consist of both theory and practical sessions for a total of 4 hours. These can be completed within a day or on two different days at one of the licensed driving schools - ComfortDelGro Driving Centre, Singapore Safety Driving Centre and Bukit Batok Driving Centre.